MHI “suspended” the SpaceJet program in 2020 when the COVID-19 virus became a global pandemic. However, actions reducing the program preceded this. The MHI executives, who routinely rotate periodically through the ranks, which supported the SpaceJet program were replaced by those who didn’t.

Beginning in January 2020, MHI began terminating the key Western leadership brought in to save the MRJ program. Alex Bellamy, the head of the program recruited from Bombardier, David Barrow, Steve Haro, and others were all in the process of being let go when the pandemic accelerated the trend.

All operations in the US and Canada were closed. The newly opened engineering center in Canada also was closed, as was the SpaceJet headquarters in Renton (WA), which was opened in 2019. All flight testing, most of which was performed in Washington State, was terminated and all employees let go. All the engineering staff in Nagoya, Japan, the headquarters for the SpaceJet program, were let go.

Over time, virtually everybody was let go or reassigned to other programs within MHI.

This month, MHI sold half the building where the SpaceJet was in production. Reports are that the two M100s in production were scrapped, which MHI denies.

Restarting the program is difficult

Restarting the program would be enormously difficult.

First, MHI pretty much wrecked confidence in the market by “suspending” the SpaceJet development, stopping flight tests, slashing the budget to nearly zero, letting go all the Western talent, the engineers, and all the support staff, closing the US HQ, and the Canadian engineering center, and now selling half the SpaceJet building.

There were just under 500 commitments for the M100 in the form of Memorandums of Understanding from top US airlines and other customers. All these went poof. How does MHI convince the airlines this time it is committed?

The entire supply chain, beginning with PW, and including all those involved in the program must be restarted. Probably all will require new contracts. Some key suppliers were skeptical of MHI’s commitment to the program before 2020. Convincing them now it’s sincere in restarting the program will be a major job.

The Pratt & Whitney GTF engines on the M90 flight test aircraft in Japan and Washington have been removed and, it is believed, returned to PW.The future of the larger PW1700G, designed for the Embraer E175-E2, is in doubt. LNA is told this program has now been paused for three years. Embraer pushed out the E175-E2 to at least 2025, after previously doing so at least twice. The airplane is designed for the USA market, but its weight is too heavy to comply with pilot labor contract limitations under what’s called the Scope Clause. Only the prototype has been built. There are no firm orders for the airplane.

Restarting the program surrounding the MRJ90/M90 for the military makes sense. These aircraft are not certifiable for commercial use. But they could be operated by the military. In fact, the Bellamy team suggested this. MHI would recoup at least a little of the billions of dollars already spent on the program.

Going forward with a military application would also allow the Japanese regulators to finish their work in learning how to certify a civilian airplane. The MRJ90 is not economically competitive with Embraer’s E190, and the sole M90 produced fixes all the technical problems encountered in developing the MRJ90. The Japanese regulator was moving at glacial speed reviewing all the documents and work, which added to the program’s delays. While civil certification wouldn’t be required for military use (or, at least, presumably not), the process could allow the all-important lessons learned to be achieved.

Another potential challenge to restarting the M100 SpaceJet is the increasing emphasis on ecoAviation. The airplane, and the engine, were conceived in 2003. Mitsubishi was the launch customer for the PW GTF engine, contrary to popular belief that it was Bombardier and the C Series.

The GTF fully complies with today’s emissions and noise requirements. But suspending the SpaceJet and dismantling its infrastructure, flight testing and dismissing virtually every employee means restarting will take a few years. Entry-into-service of the M100 was reset to a goal of 2025 by the Bellamy team. EIS probably would not be feasible before 2027, if then. And by then, will ecoAviation standards be tightened further, squeezing the PW1200G engine’s ability to comply—or even push it out of compliance? Will the market demand a greener SpaceJet than what was being developed before the program suspension?

Restarting the M100 SpaceJet program isn’t impossible. But it’s a very, very long runway to get off the ground.

LNA’s Scott Hamilton was just notified that his book, Air Wars, The Global Combat Between Airbus and Boeing, is included in the Aerospace Choice for Christmas Books by the Royal 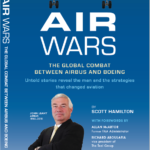