When a small company called US Aerospace announced it teamed with Ukraine’s Antonov to offer an aerial refueling tanker called the AN-112KC, observers from all over the industry scratched their heads in puzzlement.

First, few had heard of US Aerospace. It turns out that this is a “Pink Sheet” publicly traded company that is in financial difficulty. A “Pink Sheet” company is a mechanism in which stock of companies that typically cannot qualify for the major exchanges can be traded, or stock that is called “Penny Stock” is trade. Penny Stock is stock that sells for, well, pennies. Bankrupt companies are also often traded on the Pink Sheets.

US Aerospace is in default of significant debt and it has owed back taxes to the US government. It latest quarter report indicated around a half-million dollars in cash.

Third, the idea that the USAF would buy a Ukraine airplane for its mainline aerial tanker is, on the face of it, absurd. If people actually took this proposal seriously, the food fight over the prospect of the USAF buying the EADS/Airbus KC-45 would pale in comparison to the one that would occur over buying the AN-112KC.

Finally, US Aerospace missed the deadline to submit its bid by five minutes and was immediately disqualified by the Air Force. The company filed a protest with the US Government Accountability Office, claiming the USAF deliberately delayed representatives from meeting the deadline. A USAF spokesman noted that EADS sent two copies of its bid, one by air and one by truck, the day before to be sure nothing would stand in the way of submitting its bid on time; and that Boeing submitted its bid by 9am on the due-date, five hours before the deadline. In a sarcastic slam at US Aerospace, the spokesman said this process was not high school homework.

It took some doing to find but there is a 16-page PPT presentation of the AN-112KC in cyberland. We’ve also converted this to PDF, which may be downloaded here.

In looking through the presentation, we couldn’t help but notice that in the “Capabilities” slide, the photo of the AN-70 turbo-prop is a photo of an incident in which the airplane was damaged. We added the circle to the photo to highlight this. 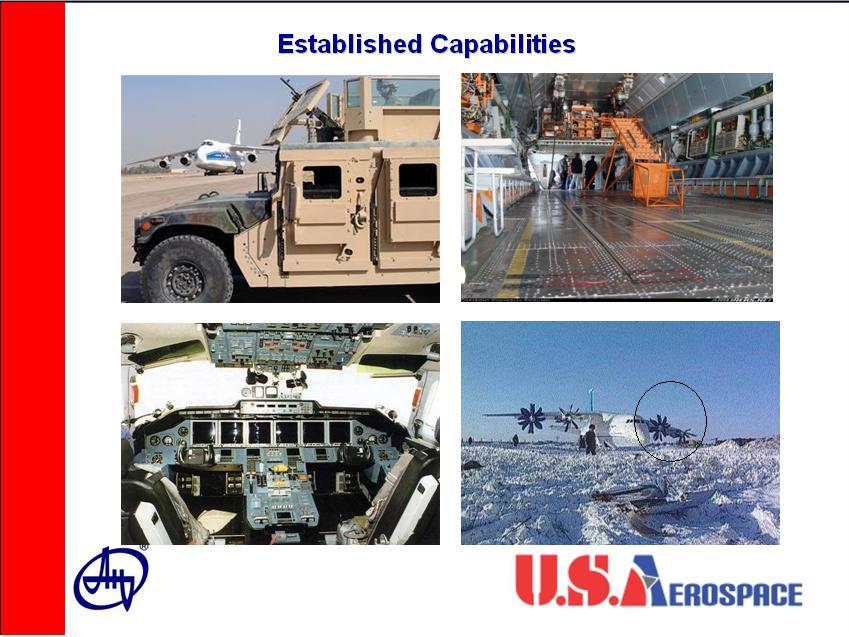 We also could not help but notice that on the US Aerospace website announcing its bid for the tanker that the illustration was not of the proposed AN-112KC but rather the EADS KC-45 refueling the Northrop B-2 bomber–which was a Northrop-composite with it was the prime contractor and the KC-45 was then called the Northrop KC-30. As marketing experts, using an accident photo to illustrate “capabilities” and a competitor’s photo to promote your tanker proposal is, well, strange.

But “strange” has been the watchword for the entire US Aerospace involvement. Perhaps the slogan should be, “US Aerospace: Stranger things have happened.”