We had boarded our flight to ISTAT Barcelona and were still at the gate in Seattle when news erupted that the first delivery of the 747-8F to Cargolux is off. AirInsight has a commentary on this. We expect to pick up some intel on the issue, perhaps as early as the Sunday night reception but otherwise Monday or Tuesday. Watch our reporting from Barcelona.

As Boeing prepares for delivery ceremonies for the 747-8F to Cargolux Airlines September 19—an event we will miss because of travel in Europe to the ISTAT conference—The Boeing Co., its employees, suppliers, and the airline personnel are justifiably excited.

Not only does this represent the hand-over after a two year delay in a difficult program, it represents the largest airliner Boeing has ever built, the latest and most advanced version of the venerable 747 but it also represents what is almost certainly the last 747 model that will ever be built.

As cool and as whiz-bang as the 747-8 is (though obviously, Lufthansa’s 747-8I will have more panache than a freighter), our thoughts go in a different direction.

We think about the entire 747 program, beginning with the 747-100—the airplane that ushered in a new era in air transportation, just as the 707 was a revolution from the piston era. 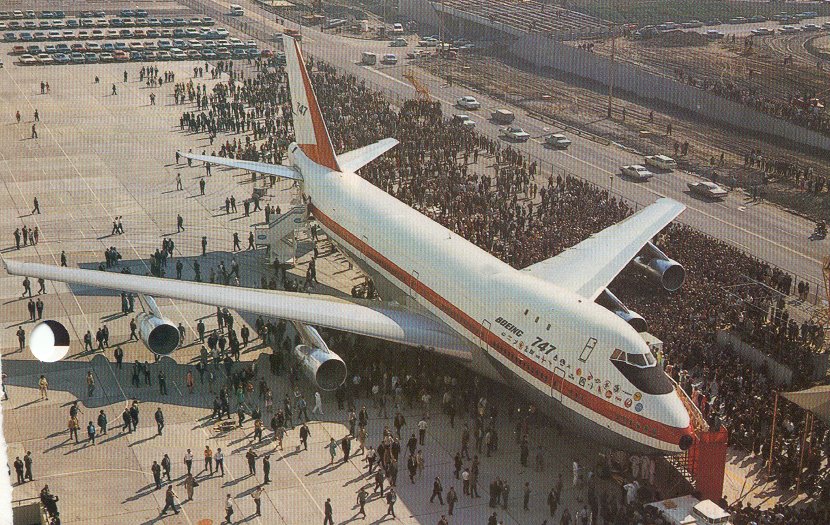 The 747-100 caused Boeing to create the Everett (WA) facility, which has been the home to every twin-aisle airplane the company has built and expanded at least once. The building is enormous, with workers often commuting within the building on bicycles or golf carts.

The Everett plant is home to thousands of Boeing employees and attracted scores of suppliers employing tens of thousands more in the greater Puget Sound area. The contribution to Washington State’s economy is massive.

The story of the 747-100 is legendary and need not be recounted in detail here. The first wide-body commercial aircraft, it was intended to be a transitional aircraft between the 707/Douglas DC-8 and the SST. 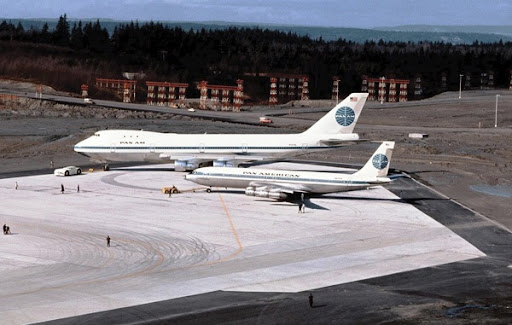 Joe Sutter, a legend in his own right, came up with the idea of putting to cargo containers side-by-side and drawing the fuselage around it and putting the flight deck on top to allow a nose hatch, making the 747 the iconic freighter it is. But the thought was that after a short time—less than 10 years—the 747 would be superseded by the SST and existing 747s—and all future ones—would be cargo airplanes. Little did anyone know the 747 would become the Queen of the Skies, the ultimate in national prestige with countries that had no business ordering the giant airplane did so as a symbol of national pride.

The 747-100 nearly bankrupted Boeing. The photo of the billboard that became infamous, “Will the last person leaving Seattle please turn out the lights?”, became representative of Puget Sound’s reliance on Boeing and the drag Boeing had on the economy when its fortunes declined as cost overruns on the 747 coupled with a national recession nearly did the company in.

There were many 747s parked at Paine Field with yellow weights hanging from the pylons because engine development of the Pratt & Whitney JT9Ds—the first of its kind—ran late.

The 747-100’s entry into service, in January 1970, came at the height of a recession, leading airlines to configure the aircraft with few passengers and, in the case of American Airlines, a piano bar. It was at the time an epitome of luxury that is being replicated in similar respects when operators began introducing the Airbus A380 into service, also at a time of a global recession. The development of the 787 with its new GEnx advanced engines gave life to the 747-8. But the program spun out of control. What was supposed to be a straight-forward re-engine and modest stretch of the airplane evolved into one with new systems, a new wing and a host of aerodynamic problems. Hampered by a shortage of engineers retained by or diverted to the troubled 787 program, development of the 747-8 was shrouded in its own turmoil.

The impact of the 747 on Puget Sound, as noted above, was dramatic in the employment it spurred, the near-bankruptcy of Boeing, the creation of the Everett facility and the prestige of owning and operating the airplane by the world’s airlines.

When the Secret Service decided it was time to replace the Boeing 707-320B that served as Air Force One, the 747-200B was the obvious choice. Now that the aging 747s that serve as Air Force One are nearing retirement age, it is likely the 747-8I will get the nod.

The jury will be out for years, if not decades, to come whether Airbus made the right call. Boeing undertook an effective public relations campaign arguing that the era of the giant jet has come and gone (even while developing the 747-8), superseded by the 777-300ER and the 787 which cater to point-to-point routes rather than hub traffic.

Airbus counters that (1) world passenger growth demands larger airplanes (a point Boeing also argues at the lower end of the scale but will not concede for the upper end); and (2) hub-to-hub is also point-to-point, which is, in fact, true.

The A380 has surpassed the 747 as the Queen of the Skies if size and passenger comfort are the criteria. We’ve been in the cabin mock-ups of both airplanes, and the A380’s upper deck has the 747-8’s upper deck beat hands down (unless you like what might be classified as the more intimate feel of the 747’s upper deck). The A380 seats in coach are roomier because the cabin allows for 18 inch seats instead of 17 inches in the 747.

But as for looks—there is nothing that beats the sleek beauty and unique profile of the 747. The A380 flies well but darn, it’s fat and ugly (but awfully impressive on the air show circuit). 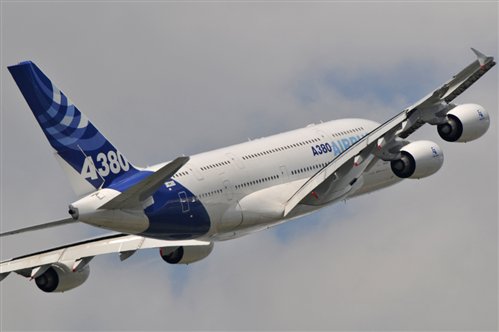 So as Boeing prepares to deliver the first two 747-8Fs to Cargolux this month and the first 747-8I to Lufthansa after the first of the year, our thoughts turn not to the future but to the nostalgia.

The Old Gal has had quite the run. And she’s got quite the future left in her, too.