Notation: Aeroturbopower weighs in on the controversy with his usual data-driven analysis.

With the commencement of the advertising battle between Boeing and Airbus, it is useful to make some additional comparisons prepared by AirInsight.

Here is the offending Boeing ad that set off the ad wars. It’s a two-page spread and sorry, we couldn’t scan it into one advert. Click each image to englarge. 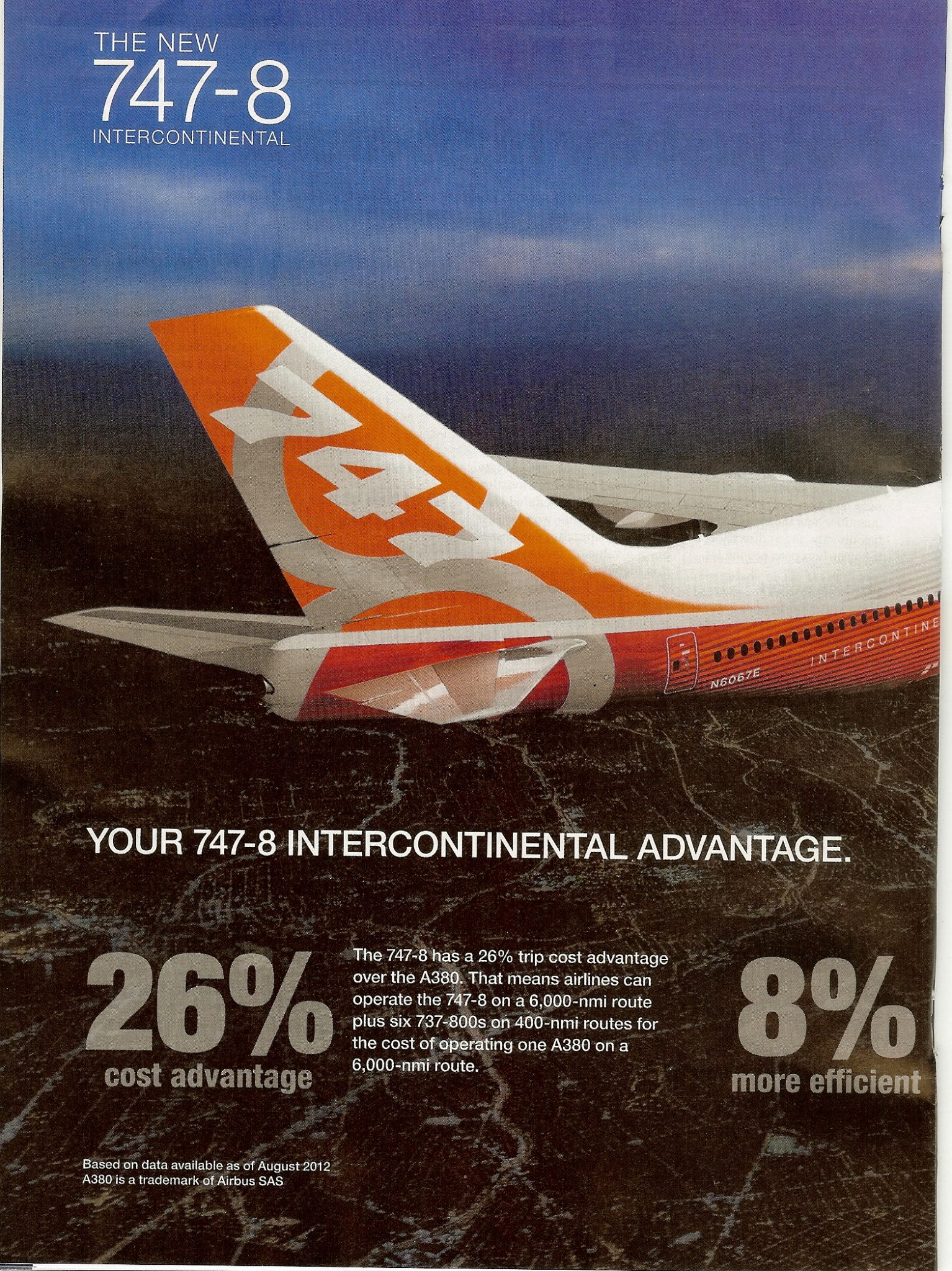 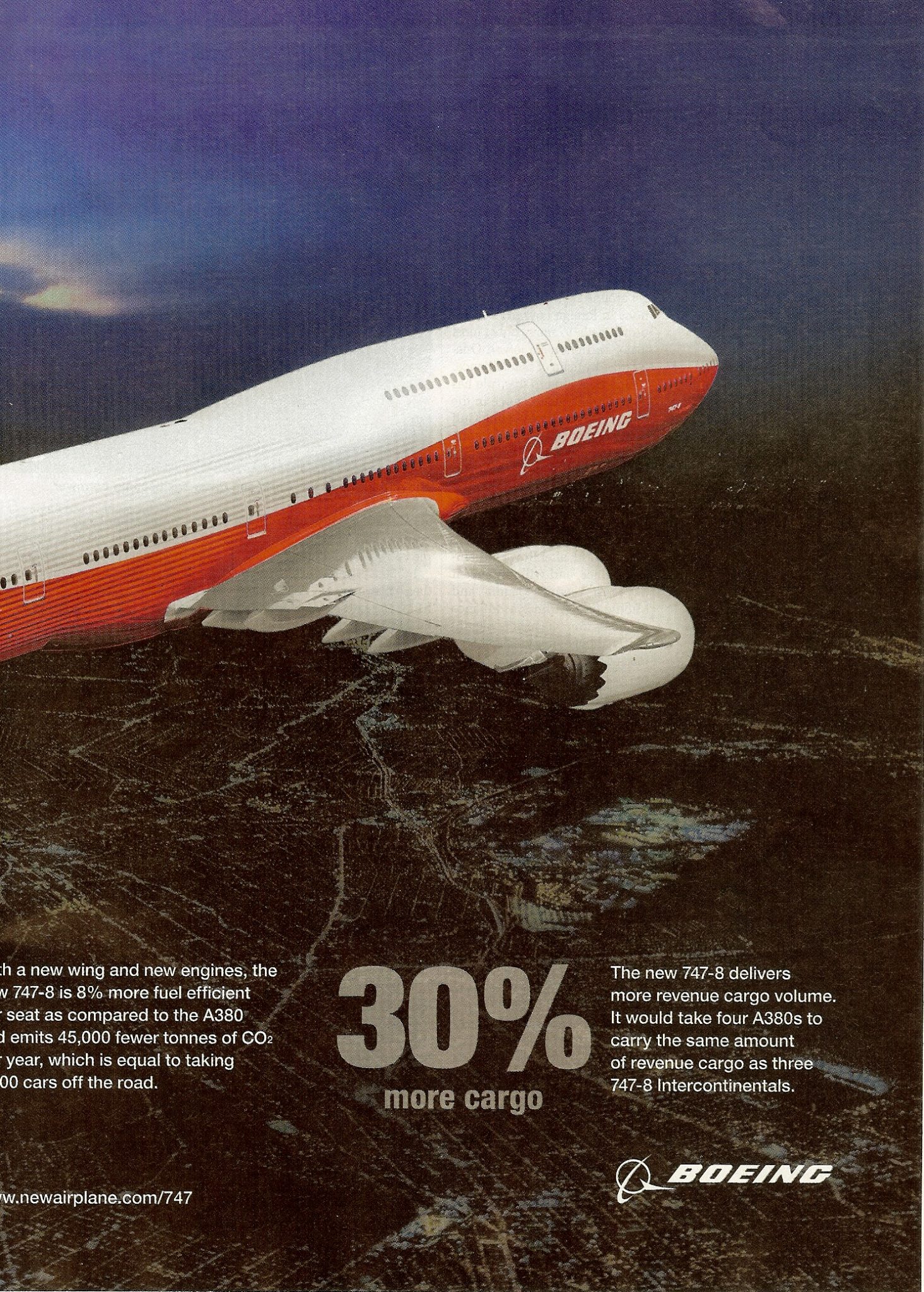 The 747-8I and A380 are quite different aircraft, and while some view them as direct competitors, they are more properly lone players in different segments of the VLA market. Nonetheless, an airline will likely evaluate both aircraft as it maps its growth strategy, and two carriers, Lufthansa and Korean Air, have chosen to fly both aircraft types for different route structures.  Each of those airlines have indicated that the 747-8I fills a gap between their 300 seat aircraft and 525 seat A380 aircraft, and will deploy the aircraft appropriately to traffic demand and traffic growth in different markets.

While the two aircraft are quite different, they are still compared to each other and both aircraft mile and seat mile economics.  Of course, in comparing these aircraft, seating configurations make quite a difference, and the two aircraft manufacturers utilize markedly different assumptions in that regard.  Boeing indicates that standard 3-class seating configuration for its 747-8I is 467 seats, but Lufthansa is currently using 362 in its aircraft, compared with 334 in a 747-400, and 526 for its A380.  Each of these layouts is oriented heavily towards premium class seating, an essential element for many carriers these days.

The Boeing layout for the 747-8I shows 467 seats configured in a layout that has somewhat tight seat pitch in business class and does not accommodate today’s sleeper seats.  The Boeing configuration offers 26 first class seats at 61” pitch, 89 business class seats at 39” pitch, and 352 economy seats at 32” pitch.  However, those pitch standards, from the 1980s, are more equivalent to business, premium economy and economy rather than first, business and economy.   Boeing also computes a 555 seat capacity for A380, using similar pitch, except for 48” rather than 39” in business for their seating standard.

Airbus, by contrast, utilizes more realistic three-class standards of 81” first class, 61” business class for sleeper seats, and 32” for economy passengers, yielding a capacity of 525 on the A380. If these standards, which are more reflective of today’s capacity, are applied to the 747-8I, the passenger count would drop to 405 seats.

Each says their airplane is better than the other in various metrics, but in our view there is a fair amount of apples and orange comparison going on. While both aircraft fall within the VLA market segment, in reality they serve somewhat different market segments—and at one time, Boeing conceded the point.

An analogy may be drawn to the single-aisle market segment. The A321 seats 189 in two classes and the 737-700 seats 125, a difference of 64 seats. The two aircraft serve different missions. Comparing these two in fuel burn, seat-mile cost and other metrics makes as little sense as comparing the differently-sized VLAs. If the 747-8I and the A380 were the same size, the comparisons would have meaning. But they aren’t and they don’t.

The Airbus A380, the highest capacity passenger aircraft in the world, takes advantage of this feature to generate the lowest seat-mile economics in the class.  However, cost per aircraft mile is lower with the 747-8I.  In examining between these two aircraft, the key determinant will be traffic – if you can fill the A380, it will provide higher profits, but if you cannot, the 747-8I could be a viable alternative.

← New battle breaks out between Airbus and Boeing–in advertising
Boeing and SPEEA: were they in the same meeting? →