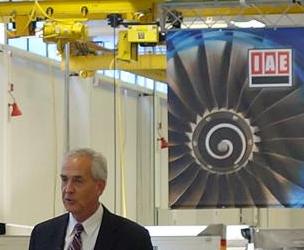 a program called Pure V program for the V2500 engine used on the Airbus A320ceo and the Boeing MD-90, leveraging OEM-provided maintenance and parts that will offered extended warranties and potential better residual values.

The announcement was made at the Dubai Air Show 17 Nov. local time.

IAE president Jon Beatty said the project was driven by customer input, particularly that of lessors, who own a large number of A320s powered by the V2500. Lessors in particular are concerned about residual values, which affect lease rates as they re-lease the aircraft after short-to-medium terms at lessees.

“Engines with 100% IAE-approved parts and repairs enhance the on-wing service, fuel economy and residual values,” Beatty told us in an interview.

Beatty said that qualifying in-service engines—and 60% will immediately, and the rest may be retro-fitted—will see improved on-wing time by an estimated 20% after going through the program. A Pure V engine will also see a return to original fuel burn specifications after normal degradation, and these will have about a one-half percentage improvement over non-IAE maintained and serviced V2500s not using IAE OEM parts.

For lessors, who own more than 50% of the V2500-powered A320ceos, expect to benefit from higher residual values by being able to pass through this value in their lease rates, Beatty said. Appraisers, who forecast RVs, need to become familiar with the program, and IAE plans a data base they can consult.