Alaska-Delta Battle in Seattle comes at the expense of United, Southwest

National media and trade magazines are paying attention to the increasing battle between Alaska Air Group (Alaska Airlines and Horizon Airlines) and Delta Air Lines (including its regional airline partners) in the Battle in Seattle as the latter dramatically increases its presence here, but the focus appears to be on the wrong parties.

While the headlines and stories point to the “Delta challenge” to Alaska, a review of the traffic statistics and market share data provided to us by Sea-Tac Airport yesterday show that Alaska and its regional sibling, Horizon Air, and Delta with its regional partners are growing at the expense of United Airlines and Southwest Airlines. 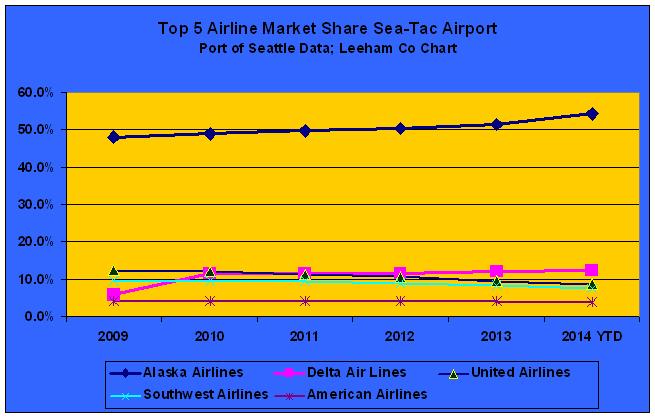 Alaska Airlines’ market share at its primary hub, Seattle-Tacoma International Airport, is growing despite service additions by Delta Air Lines. Delta’s growth is coming at the expense of United Airlines and Southwest Airlines, whose market shares are falling. Source: Sea-Tac Airport/Port of Seattle.

The chart above clearly illustrates Alaska’s lead over Delta (and every other airline at Sea-Tac) from 2009, before Delta began its expansion, through 2013. Alaska began this period with 48% of the Seattle market, followed by United at 12.3% and Southwest at 9.6%. Delta edged American’s 4% with a 6% share.

On the other hand, United’s share was flat in 2010 but has steadily declined since then to an 8.8% share YTD.

Southwest, which in 2005 threatened a big push in Seattle with a proposal to open an eight gate terminal at Boeing Field and abandon Sea-Tac, had a 9.6% market share in 2009 but only 7.5% YTD.

During the same period, passenger traffic at Sea-Tac grew by 11.5%. The chart below shows, however, that United and Southwest are carrying fewer passengers today than they were in 2009. 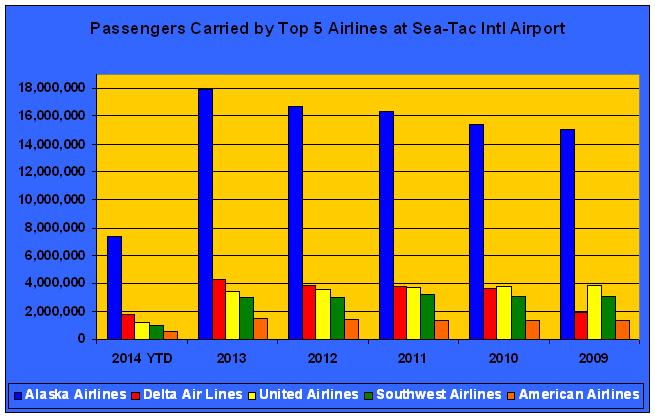 Alaska and Delta are carrying more passengers today than they were in 2009, but United and Southwest are carrying fewer. Delta’s growth is coming at the expense of UA and WN. Source: Sea-Tac International Airport/Port of Seattle.

Analysts are viewing the impact on Alaska with some level of hand-wringing. The concern should truly be about United, which is still struggling with its Continental Airlines merger.

Southwest can hold its own.

7 Comments on “Alaska-Delta Battle in Seattle comes at the expense of United, Southwest”