News reports that Boeing is promoting the 747-8I to Emirates Airlines prompted some to leap to conclusions that the struggling program is about to get a sorely needed shot in the arm. We don’t think so.

For one thing, Emirates president Tim Clark immediately poured cold water on the idea. In the process, in the same report, he said the 747-8 can’t match the Airbus A380 economics.

For another thing, we believe Emirates is trending toward a two-aircraft type fleet for which there is no room for a third–whether it is the Airbus A350 or the 747-8I. It’s clear the Emirates business model is built around the A380 and the Boeing 777-300ER/777X.

While there are going to be significant differences between the 777 Classic and the 777X, the latter is essentially a derivative of the former (Boeing is seeking regulatory certification under the existing 777 Type Certificate; a decision from the Federal Aviation Administration is pending).

The new 777-9X has seat mile costs that matches the somewhat larger 747-8I, according to one airline fleet planner we spoke with. Our own analysis also doesn’t support the economic arguments cited in favor of a 747-8I compared with the 777-9 or the A380, when an apples-to-apples seating configuration floor plan is assumed. Our numbers give the 777-9 a substantial advantage over the 747-8. 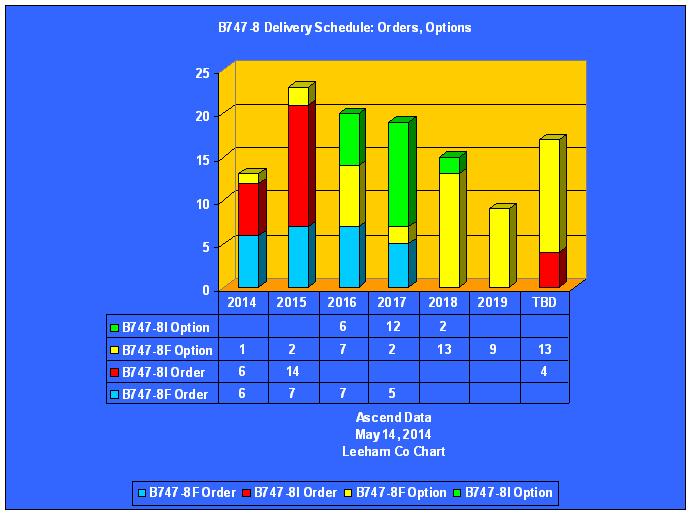 Red and Blue are 747-8 firm orders and deliveries scheduled this year and next. Beginning in 2016, deliveries drop off the cliff. Maintaining the current production rate of 18/yr requires converting 100% of the options and LOIs and obtaining new orders.

For Boeing, any potential order from Emirates would have to be large, not small, to solve its backlog problem. The backlog is so thin that we believe Boeing will be forced to reduce an already low production rate in the very near future. Deliveries peak next year and drop off a cliff in 2016, even if all options and letters of intent were converted–a prospect will consider unlikely. A handful of orders won’t be enough to maintain rates at the current 18/yr or 1.5/mo.