Bjorn’s Corner: Weight or fuel limited, what is this all about?

24 July 2015, ©. Leeham Co: In recent articles around the Ultra Long Haul (ULH) needs of Singapore Airlines, there have been many references to aircraft being either fuel or weight limited. It is not so evident what this all means and what the practical consequences are of one or the other limitation.

Let’s go through what it all means with a practical example and show how it will affect the performance of the aircraft and what one can do about it.

As an example we will pick Boeing’s ULH 777-200LR. It is known as the Worldliner since it can connect almost any two cities in the world with its ultimate range of 9,300nm. In practical use, the Worldliner has often been configured for less range. In such configurations it runs out of fuel tank space before it reaches its Max Take-Off Weight. This is “fuel limited.” Here is how it works.

The best way to understand how it all works is to learn to read an aircraft’s Payload/Range chart.  Figure 1 shows the Payload/Range chart for the 777-200LR taken from the Airplane Characteristics for Airport Planning (ACAP) document that the OEMs issue. 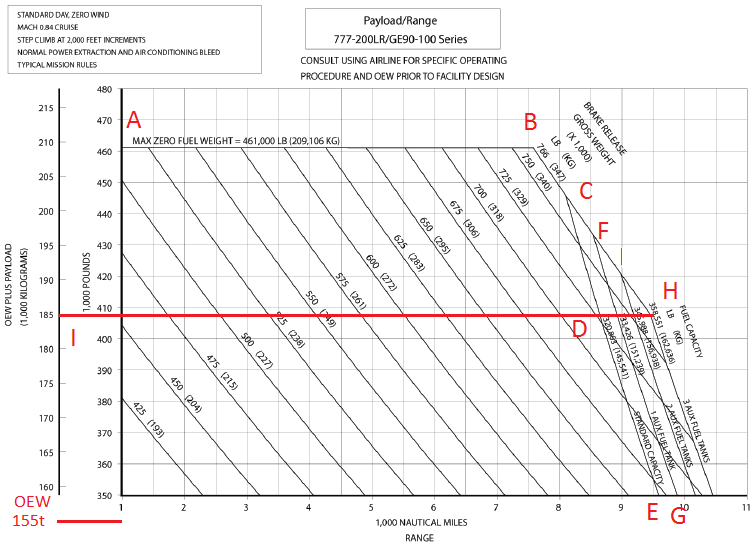 It is a very good chart, as Boeing has historically included a lot of information in its charts that other aircraft manufacturers don’t. We will now show that this information is quite useful. The chart looks busy but is quite straight forward to understand.

We have the aircraft’s empty weight + payload on the Y axis and the range on the X axis. As we fill the aircraft with fuel we have useful range to fly. How much depends on how much fuel is filled in relation to empty weight + payload. The resulting range is shown by the sloped lines named “Brake Release Gross Weight” spreading over the diagram from left to right. The more the “Gross Weight”, or Take-Off Weight (TOW) as it is more commonly called, consists of payload the less range. Therefore the lines starts at high payload and little range as it only allows a little fuel and goes to longer range the more the TOW is a mix of less payload and more fuel.

On the lower left I have entered the Operational Empty Weight (OEW) of the 777-200LR as 155t. The ACAP lists this as 145t but Boeing shows it as a more realistic 155t for operational aircraft in other documents. Now follow the OEW + Payload axis upward and you reach the line from A to B which describes the Maximum Zero Fuel Weight (MZFW). This is the maximum payload that can be loaded on top of the empty weight for the aircraft.

At point B we are at the aircraft’s sloped Gross Weight line called Maximum Take-Off Weight (MTOW). Here we have to start off-loading payload to be able to fill the tanks more to fly further, otherwise we would pass the MTOW. The aircraft is at its weight limit.

The angle of this line, in fact all the Gross Weight lines, describes how fuel efficient the aircraft is for such a mission. The steeper the line the more fuel the aircraft consumes. Here’s how one reads the fuel consumption value:

The diagram also has a steeper line that starts at C. This is the line that describes how we trade payload for range when we can no longer fill the tanks further. Our fuel tanks are too small, despite having weight margin, we can’t fill more fuel to fly further; the aircraft’s tanks are full.

In such a case we have to off-load more payload so that the aircraft gets lighter and can therefore fly longer as the drag due to weight (induced drag) is reduced. The line from C to E is the aircraft’s fuel limit line when equipped with standard tanks. It shows how much payload we must sacrifice to fly further once at the fuel limit. At E we have traded all payload to get the aircraft ferried to 9,600nm.

If you read the text on the steep sloping lines it says “Fuel capacity” and the base aircraft can take 145,541kg fuel. The additional lines are for aircraft equipped with Additional Cargo bay Tanks, ACTs. We can read the max is 162,636kg with 3 ACTs.

To understand the OEM’s standard range situation; standard range is given with nominal passenger capacity with their bags and no cargo. In the case of -200LR this is 301 passengers times 210lbs or 95.3kg equaling 28.7t or close to 30 tonnes. Add 30 tonnes to the aircraft’s OEW of 155 tonnes and we are at 185t at point I. Follow the red 185t line to the right until you are at fuel limit lines, point D, or the MTOW line, point H.

You can see that we are hitting fuel limit lines at D way before we have reached the aircraft’s MTOW of 347t at H. If we have no ACTs installed, the fuel is enough to reach 8,650nm. If we have the max allowed three ACTs, we reach the max range of 9,400nm at H. The extra 100nm compared to official figures is because each ACT weighs around 500kg so we should have gone up 1.5t to hit the 3*ACT fuel limit line at 9,300nm.

We now know that the oft quoted 9,300nm of the 777-200LR is a max value and will only be achievable if the aircraft has installed three extra cargo bay tanks to move the fuel limit lines out. The standard 8,650nm represents flying times of 18 hours and there are very few -200LRs used on longer routes. Operators therefore seldom install ACTs and if they do they typically install one.

We now know that those that talk about the 9,300nm range of the Wordliner probably don’t understand that is normally fuel limited to shorter range (although 8,650nm can by no means be called short). After 18 hours in an aircraft, one is pretty happy to step off and stretch one’s legs.

← Options for Singapore Airlines to operate direct flights to the US, part 2.
Interior supplier sees 777, A330 production rates coming down →

9 Comments on “Bjorn’s Corner: Weight or fuel limited, what is this all about?”