Dissection of the 2015 Airbus order book

But Boeing’s clear win was due to the freighter sector, with the tipping order the 49 767-300ERFs from FedEx. Boeing sold 71 freighters last year, compared with just four by Airbus. 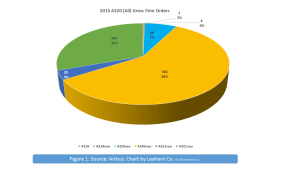 The A319 series was a non-factor. No ceos and only three neos were sold. One A318 was ordered, an Airbus Corporate Jet model. The A319neo is moving to take over the role of the ACJ and the A318, which isn’t getting the neo treatment, will be terminated along with the rest of the ceo line in about two years. 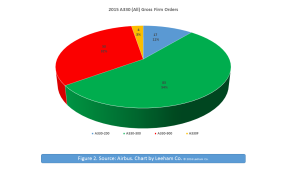 Airbus concentrated last year on selling enough A330ceos to fill the production bridge, at 6/mo, to the A330neo. Officials said this goal was achieved and now the sales force will focus on selling the neo.

Clearly the big Airbus weakness in wide-bodies is its freighter presence. Despite a continuing weak cargo market, Boeing’s outstanding performance in this sector—95% of the orders—remains a Boeing strength.

A350 sales have stalled. There were 16 gross orders but 19 cancellations (in favor of the A330-900), resulting in a net loss of three orders for the year.

Officials say that one reason sales slowed was that the backlog extends to 2020 and beyond. However, Boeing’s 787 backlog likewise extends well out, but Boeing posted nearly 100 new orders (including some being the white-trail Terrible Teens).

Market Intelligence suggests that Airbus was more focused on trying to sell the A380. Little success has been achieved here. There were three orders from an Unidentified customer, but widely reported to three white tails resulting from the SkyMark Airlines bankruptcy. Japan’s ANA participated in the SkyMark reorganization with Airbus backing and it was also reported that a presumed quid-pro-quo was an A380 order.

78 Comments on “Dissection of the 2015 Airbus order book”