Ever since the Second World War, the navigation of civil airliners has been done by flying straight leg routes with the help of special ground-based radio beacons. The most elementary of these is the Non-Directional Beacon, NDB. It requires the pilot to read bearings to the beacon and is difficult to use.

A directional beacon called VOR, that went operational after WW2, changed the way that airliners could navigate (over large un-inhabited areas like the Atlantic or the Oceans, different low precision wide area navigation systems were used like LORAN). While the VOR was a big step forward, it still required navigation in straight leg routes between VORs, and this was not 100% efficient.

The development of powerful navigation computers (FMS) and the use of GPS is now changing this.

The traditional route to land at an airport from an airway followed the capabilities of the VOR and NDB based navigation beacons complemented with a Distance Measurement Equipment, DME. An approach chart which shows a numbers of ways to reach Boeing Field, Seattle, from different airways is shown in Figure 1. 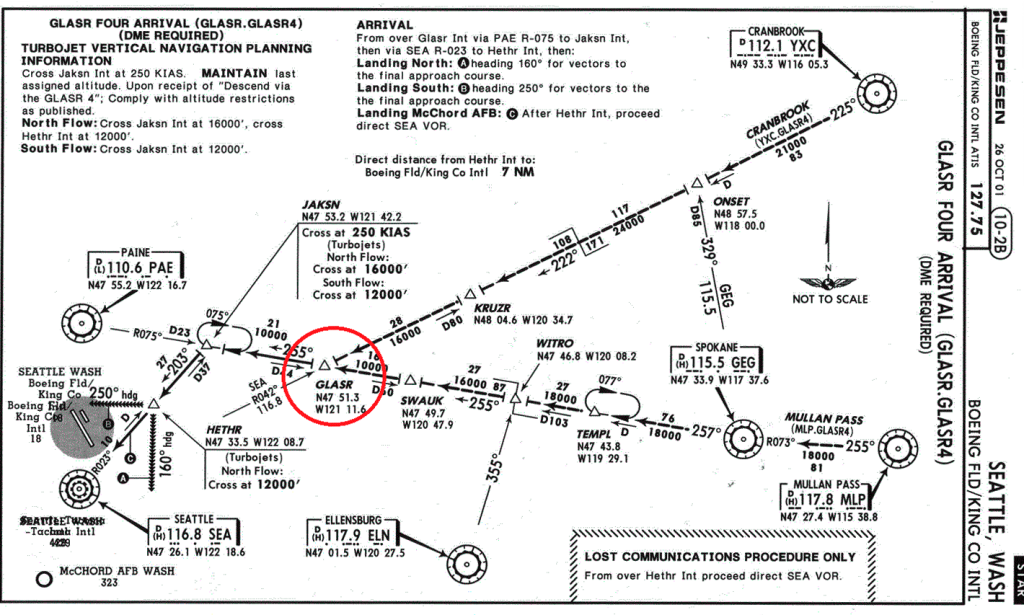 This is a Standard Arrival, STAR, chart which shows the different possible ways to land at the Boeing Field from the east (it is a chart used in Microsoft Flight Simulator, which is a copy of an old real chart from Jeppesen). The arrivals are called GLASR FOUR as this is the central navigation point made up of different VOR radials (directions) and their DME distances (for instance, go from PAINE on radial 075° and to 23+44=67nm and you are at GLASR).

As can be seen, the paths are made up of straight segments and from Northeast, coming in over CRANBROOK, one would have to fly in Zig-Zag to reach the point HETHR where one is finally Radar vectored to the runways.

It would, of course, be more efficient to be routed directly toward Boeing Field and then do a smooth decent to land on the runway. This requires that the navigation would be changed to not follow possible radial of VORs but be free to define more direct routes (there would still be predefined routes, same for all, but more direct and efficient).

With the help of the modern airliner’s navigation computer, the FMS (for Flight Management System), it is possible to let the computer continuously calculate the directions and distances to the VORs and DME (make fixes) so that the aircraft could fly such an optimized path.

It is much easier done if the GPS system is also brought in as a navigation aid. Today the modern FMS has the capability to use all the aircraft’s navigation receivers, including any GPS receivers, and enable so called area navigation or RNAV.  The pilot follows a predefined more direct route on the displays that he has keyed into the FMS and the FMS does all the work of tuning in different VORs and DMEs or using GPS to calculate fixes so that the aircraft is on track.

For landings, it can then look like Figure 2, which is an example of a RNAV, or the even more precise RNP (Required Navigation Performance) approach, being performed by one the markets FMS systems, in this case, the one for Boeing’s 737 from GE Aviation. 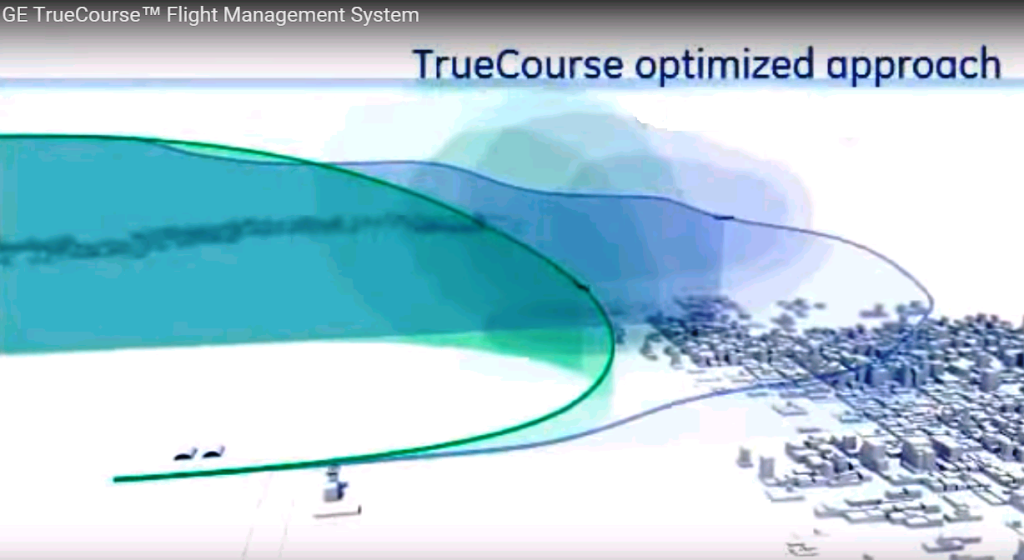 It’s obvious that a one circle optimized descent from cruise altitude directly to the runway threshold (or to a final landing with ILS) is more efficient than the classical step wise decent following the typical straight leg-turn-straight leg-turn approach.

RNAV and RNP (which is an enhanced RNAV with even more precision) are the future for air navigation. It requires powerful navigation computers (FMS) and a multitude of redundant GPS and VOR/DME receivers. The FMS manages it all so that one can fly a modern more direct and optimized route, saving fuel, emissions and as seen in the picture generate less noise over urban areas.