C Series in Europe for route-proving

23 March 2016, ©. Leeham Co: Bombardier and Swiss International Airlines (SWISS) held a press conference in Zürich today at the conclusion of the C Series European route-proving. The route-proving on SWISS network was part of the final preparations ahead of an Entry Into Service (EIS) for CSeries with SWISS end of June.

The route-proving was done by Bombardier pilots with SWISS pilots as observers. SWISS service personnel conducting ground services for the aircraft under the supervision of Bombardier personnel.

We got an exclusive interview with Rob Dewar, Vice President C Series aircraft program, after the press conference. We discussed the progress with the C Series program and the result of the route-proving.

The target for the route-proving was to fly the first production CS100 on SWISS route network under realistic operational conditions. The test lasted three weeks and over 30 city pairs were visited from SWISS home base in Zürich. Figure 1 shows the results of the combined US and European route proving that has been done to-date. As part of the picture one can see the routes that was flown on the SWISS network with Zürich as home base. 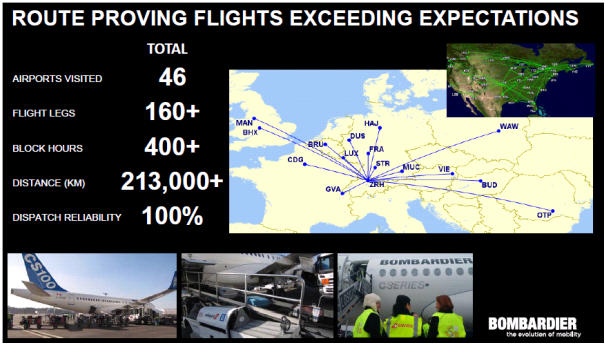 The tests were very valuable for SWISS, as they could service the aircraft with their normal procedures. The airline could then observe how the procedure worked with the aircraft and the resulting turn around times, dispatch reliability etc.

We asked Dewar how the flights went given that modern aircraft are huge and complex software systems. C Series delays were almost entirely due to the comprehensive testing needed on the large software system that the Fly-By-Wire and Avionics system constitute.

“Given the complexity, there should have been the typical nuisance warnings?” we asked.

“You are right, Bjorn,” answered Dewar, “All planned flights could be conducted so we had 100% dispatch reliability with about half of the flights having no issues whatsoever. For the rest of the flights, there could be one or two nuisance warnings that needed our attention. The things that we encountered were issues that were well known and that we address in the final software release for EIS, build 7. So it looks good, but we will not be fooled, we operated about four sorties per day. In a real operational environment, there will be up to six legs per day. We and SWISS are building up a comprehensive support organization for EIS to take care of any issues that might arise.”

“Considering that Bombardier inserted the CS100 aircraft into a number of the network operations we currently service, the route-proving program provided us with a real indication of how the C Series will operate in our route system when we take delivery of our first CS100 aircraft in June. As the launch customer and the first airline to operate the C Series aircraft, we are very pleased and impressed with the results. It was equally exciting to see these first set of flights operating from our home-base in Zurich.”

SWISS intially ordered 30 CS100s with options for a further 30 but last year changed 10 CS100 firm orders for the larger CS300.

The CS300 is in the middle of its complementary flight tests. As a straight stretch of the CS100, there are small system differences. The tests are therefore concentrated on verifying aerodynamic and operational performance differences caused by the longer CS300 fuselage. Tests are running to plan and will be concluded as planned in June.

CS300 launch customer airBaltic is in full preparation to receive the aircraft during the autumn, with the exact schedule to be announced shortly, Dewar said. The production of the first CS300 for airBaltic is well advanced with the aircraft being structurally complete at the Montreal Final Assembly Line (FAL) and now starting system installations.

Bombardier plans to deliver 15 CS100s and CS300s during 2016. “Won’t that be a challenge with the first delivery at end of June?” is my question. “That is what we have said we will do and that is what I think we are able to do,” Dewar said.

2 Comments on “C Series in Europe for route-proving”