May 11, 2016: Boeing is in the strongest position it’s ever been but Boeing cannot stand still, says Dennis Muillenburg, chairman and CEO of The Boeing Co. Customers want high value and low costs.

“Our goal is to set a higher bar for ourselves and be the best in aerospace,” Muilenburg told an international group of aerospace analysts at the company’s annual investors’ day. “You’ll see us emphasizing more and more ‘one Boeing.'”

Muilenburg said Boeing will lead with innovation, including more modern factories, as evidenced by the new wing production plant for the 777X wing analysts viewed Tuesday. 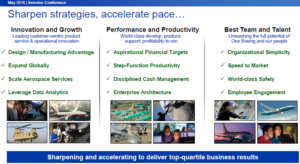 This chart synopsizes the Boeing strategy during the next five years to grow and become more profitable. Source: Boeing.

Over the next five years, Boeing will turn its goals into reality, he said. Achieving these goals will allow Boeing to “break through” to achieve double digit margins.

The two part strategy is building “strength on strength,” including growing the commercial airplane business; improving the defense business; and grow the services business. “Disciplined innovation,” executing plans already in place and sharpening “winning value” for customers are key to the progress during the next five years, Muilenburg said.

Muilenburg said improvements in production will lower costs. Growing services in a growing market will add to the company’s profits.

The CEO said that Partnering for Success is a long-term program to reduce costs, finding new ways to add value.