May 11, 2016: Boeing strives to be a global industrial champion, not just against its peer group, says Greg Smith, the chief financial officer of The Boeing Co. Boeing has a continuing commitment to returning cash to shareholders, repurchasing 150 million shares, he said.

Boeing has had 17 production rate increases in recent year, with five more on the way. 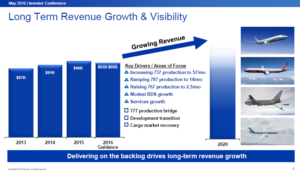 Boeing has had 17 production rate increases in the past six years and plans five more in the coming years. Source: Boeing.

“We’re not satisfied with our current segment margins,” Smith said. Boeing achieved a 10% margin last year but wants to grow to the mid-teens in the near future. Cutting costs, improving productivity and achieving favorable pricing on its aircraft and other products are necessary to reach this goal.

Smith said Boeing is working to reduce risk in production, transitioning its pension plans to a less risky structure, achieving labor contract stability through 2022 and transition carefully between current and new products are elements of this focus.

“We expect earnings to grow over the next decade. We expect cash flow to grow at even a faster pace,” he said.