May 11, 2016: Decisions Boeing has made today have been hard, but assure Boeing will be around another 100 years, says Ray Conner, CEO of Boeing Commercial Airplanes. “We compete every day with aggressive competitors.”

Conner sees continued growth in aircraft demand. Boeing’s backlog continues to grow, but Boeing also continues to monitor global conditions. But compared with 2001 after 9/11, Boeing’s backlog is more diverse in the world and among the type of customers. Deferrals, cancellations and skyline adjustments are “way, way below historical averages.” 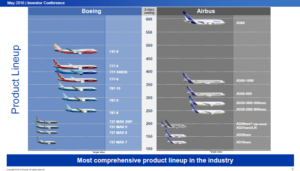 Boeing has learned “hard lessons,” but has reached a “nice equilibrium” between innovation for innovation sake and innovation that is customer driven.

“When it comes to the narrow body market…naturally we are in continuing discussion with our customers,” he said. “Our priority right now is completing the MAX and 777X programs.” There have been a lot of discussions about the MAX [7X and 737-10], but no decisions have been made, Conner said.

Two hundred of 250 737 customers have yet to make a decision between the MAX and Airbus A320neo, Conner said. The top five 737 customers, such as Southwest Airlines and Ryanair, have been “pretty conservative” about ordering the MAX, leaving a lot of opportunity for future sales. Airbus pursued a different strategy for growth, rather than growth and replacement, Conner said. 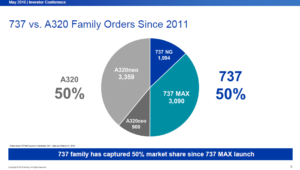 Boeing has captured 50% of the single-aisle market vs Airbus since the launch of the 737 MAX, Boeing says, including sales of the 737NG and the A320ceo. But Airbus leads in the neo-MAX sales. Source: Boeing.

Boeing has surpassed 400 hours of flight testing for the MAX, Conner said.

“We have a lot of people who can retire in the next five years,” Conner said, allowing Boeing to use voluntary retirement to reduce head count. “By doing this, we are able to manage this in a much different way than in the past.”