March 18, 2016: The air cargo market continues to struggle, according to data compiled by the International Air Transport Assn. (IATA) in its first quarter report for information primarily in the fourth quarter and full year of 2015. 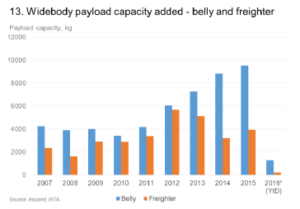 “In-service payload capacity for widebody freighters increased for the fourth consecutive quarter,” IATA reports. “The increase is explained by a reduction of in-storage capacity and delivery of new aircraft. In-storage capacity remains at levels comparable to historical highs but has reduced as aircraft have come out of storage. The pace of retirement of older aircraft has continued to slow, with retirements of only two aircraft in 2015Q4.”

IATA coined a new phrase, “new mediocre,” to describe the current state of the market.

“Global growth continued to grow below its potential–“new mediocre” growth is now the reality,” IATA wrote.

Lower oil prices brought freighters out of storage, adding to capacity but putting pressure on yields.

The full document is here.