The air freighter company is what keeps Antonov afloat, for it has been hit hard by the fall of the Soviet Union and Ukraine’s decision to split with the Russian Federation and orient itself to the West.

Adapted to the state planning system

This impressive number of Antonov aircraft is of little help to the company today. It does not own the rights to most of these aircraft as the rights have been licensed to the production companies in most cases. It is also these companies that maintain and support their produced aircraft, an important revenue stream for any aircraft manufacturer.

Consequently, Antonov, with its 3,000 engineers, has been dependent on new development projects from the Russian and Ukrainian states. When these dried up because of the Ukrainian-Russian political crisis, things turned bad for Antonov. It was engaged in developing and certifying the advanced An-70 transporter for the Russian and Ukrainian military, an aircraft as flexible and capable as the Airbus A400M. This project is now stopped. The split with Russia when it comes to development and production of Antonov aircraft is complete.

Antonov has changed a lot from 2015. The company ceased to exist as an independent unit under the Ukrainian Ministry of Economic Development and Trade. It became part of the state giant UkroBoronProm’s (UkroBoronProm gathers over 100 of Ukraine’s important defense and aeronautical industry companies) May 12, 2015. UkroBoronProm was set up by the Ukrainian state to transform its Soviet oriented Defense and Aeronautical industry into Western style market-driven companies.

We met with the President of UkroBoronProm, Roman Romanov, at the Farnborough Air Show, to discuss the way ahead for Antonov. Romanov gave us a comprehensive presentation of the transformation project he is leading. UkroBoronProm is changing the mindset of 80,000 people in more than 100 companies, teaching them that one develops and produces what the market wants, not what some minister, political or military leader thinks is the suitable thing to do. UkroBoronProm has made considerable progress since it started this work in 2010. The total group is now profitable after years of losses and cooperation with Western partners is sought in all fields.

For Antonov, this means their Soviet era designs An-32 and An-178 are now being Westernized. This involves finding replacements for all Russian Federation-developed and produced parts. This has taken the form of a cooperation with Saudi-Arabia where the An-32 is brought to an An-132 specification, featuring western-built avionics and engines. The Saudi-assembled An-132 will be powered by Pratt & Whitney Canada PW150 turboprop engines and have Honeywell avionics, Liebherr air conditioning and UTC Aerosystems APU. 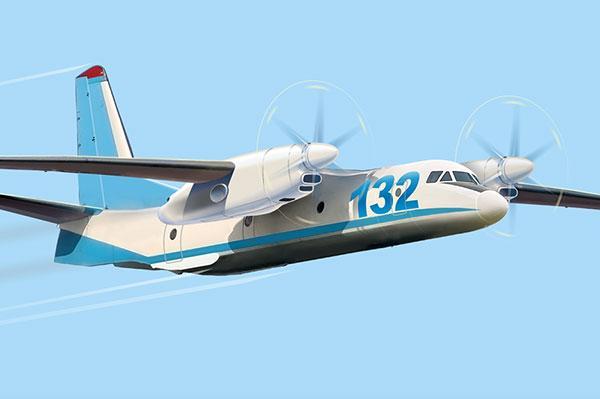 An-132 with Pratt & Whitney Canada engines and Western systems and avionics. Source: Antonov

A similar transformation is underway with the Embraer KC-390 and C-130 Hercules-sized An-178. From containing 42% Russian made components when it was conceived from the An-158 airliner three years ago, it is now devoid of any Russian dependencies. Cooperative sales and production projects are now actively sought for the An-178 with the first agreement signed with India’s Reliance Defence Ltd. The aim is to replace the Indian-Russian state’s ailing Ilyushin Il-114 project. This project, which started in 2000, will take 19 years to produce the first flying prototype. Many doubt the Indian state wants to wait so long for an aircraft which cannot  be more than the An-178 which has been flying since May 2015. LNC has this short video from the Paris Air Show about the An-178. 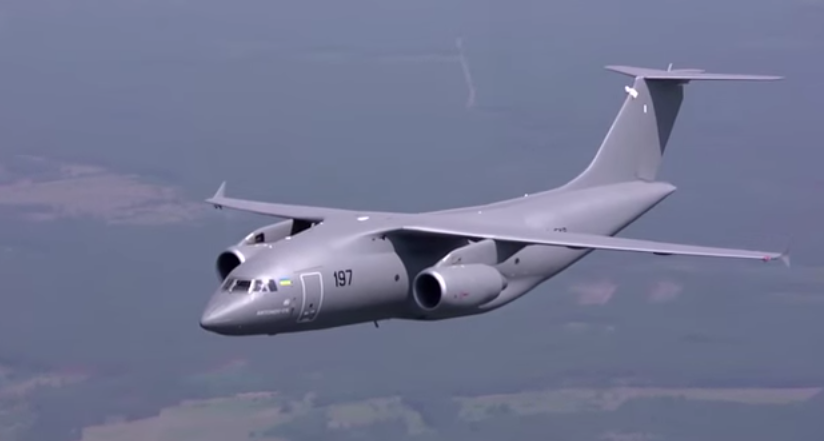 An-178 prototype which is flying since May 2015. Source: Antonov

The mainstay of the Antonov Airlines cargo, is transported by the An-124 Ruslan. This, the world’s second largest outsize cargo transport aircraft after the An-225 Mriya (which was only built in one copy), is operated in a joint outsize cargo company “Ruslan International” with Volga-Dnepr Airlines of Russia. A total of 26 of these giants where produced. Ruslan International operates 17 of these. The Ruslans are active over the world and often are called upon to fly the largest GE and Rolls-Royce aircraft engines to places where they are urgently needed.

There are no plans to seek an immediate cooperation to restart production of the An-124. The existing aircraft will be upgraded with Western avionics (FMS, ADS-B etc) to make the operating fleet more efficient. Then the possibilities for producing further aircraft will be explored, should an interested partner be found.