December 08, 2016, ©. Leeham Co: Boom Technology and Virgin Atlantic plan to offer supersonic business class passenger traffic over the Atlantic. We covered the type of challenges that this poses in previous articles. The most difficult challenge is finding a suitable engine.

We described what type of engine will be required in Part 2 of the series. We will now investigate what thrust this engine must deliver at different parts of the flight envelope.

How “draggy” is supersonic flight? Why did Concorde and the Tu-144 need afterburners for the acceleration to cruise speed?

The demand for thrust from the engines is determined by the aircraft’s drag. For cruise at constant speed, one needs thrust which is equal in size to the drag of the aircraft. For climb, one needs a thrust excess of more than 5% so that the aircraft can gain altitude. The larger the excess, the faster the climb.

A supersonic aircraft like the Boom SST has the same drag characteristics as a normal airliner until it reaches Mach 1. The SST aircraft has a very low aspect ratio (1.5 compared to 9 for modern airliners) so the induced drag will be high at low speed. The wetted area of an SST is large, more than double per carried passenger compared to a normal airliner (the Boom SST is around 19m2 per seat versus eight for the Boeing 787-9).

The supersonic drag components are heavily dependent on the aircraft’s components slenderness. Volume wave drag rises sharply for fuselages with fineness ratios under 20 (fineness ratio is maximum fuselage diameter versus length; a normal airliner has ~10). The lift wave drag forces a wing with a low thickness ratio (wing thickness versus cord). Around 3% is needed instead of 10%-13% for normal airliners.

To keep the skin friction drag down (it is the most dominant component also for supersonic speed), the aircraft needs to fly high, in thin air. A Mach 2 a SST needs to find a way up to a cruise altitude of around 55,000-57,000ft. Normally, the induced drag would make flight impossible at such altitudes, but at Mach 2 the aircraft is flying so fast that induced drag is low.

As the Boom SST has three engines, each engine must deliver a minimum 5.5klbf of thrust at around M2. This fixes the cruise thrust demand for the engine/nacelle combination.

To get to 55kft cruising altitude, an SST needs to use a special climb technique. Initial climb must be made subsonic, both for sound boom and drag reasons. The dense air makes going supersonic impossible until the aircraft has reached around FL380-FL390 (altitudes of around 11.5km).

At FL390, the engines are out of climb thrust excess at normal subsonic speeds. The climb to higher altitudes than FL390 can only be done at supersonic speeds where the pressure recovery of the nacelle gives the engine the extra thrust need for the continued climb. 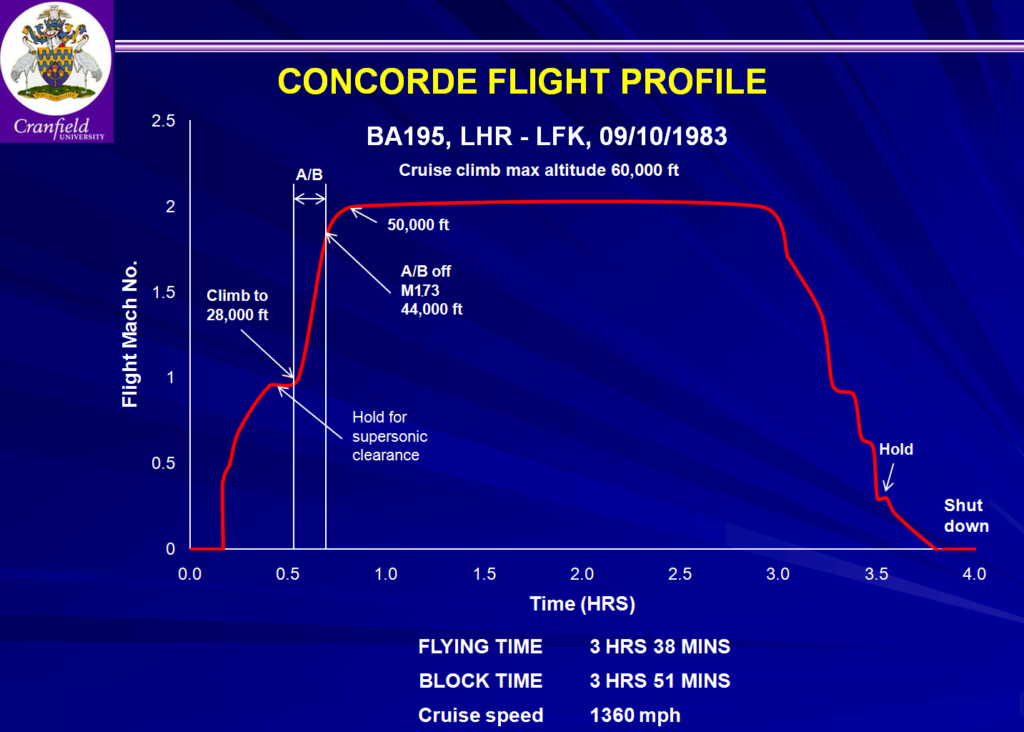 At that altitude, the aircraft accelerates from Mach 0.9 to a supersonic speed of around M1.3 and starts a long cruise climb to the ultimate cruise altitude. The climb profile for the SST is similar to the one for Concorde, Figure 2, and for the same reasons.

The climb to thin air is done subsonically, where the supersonic flight begins. The Concorde used afterburners to pass the sound barrier and for the climb. We will see if a non-afterburning engine can manage these demanding flight phases.

The aircraft drag is around 10klbf at M0.9 as we start the acceleration through the sound barrier. The drag then raises to 16klbf due to supersonic shock waves around M1. At M1.3, it settles down until we reach M1.4, where it starts to increase again. The climb is therefore restarted at M1.3 with a slow increase in speed as air gets thinner, until we reach M2 at around 50kft. Cruise is then performed as a constant cruise climb as the aircraft burns off fuel and gets lighter, gradually increasing speed to M2.2.

Total drag remains around 15klbf during the climb, balancing the dominant parasitic drag (at around 6.5klbf) with the other components staying below 4klbf. At cruise the drag starts at 16klbf as we increase the speed to M2.0, then gradually sinks towards 14klbf at mid cruise weight and M2.2.

The takeoff thrust requirement for the SST as sketched would be around 18klbf per engine. With forward speed lapse, this would give a V2 safety speed thrust need with one engine inoperative of around 15klbf per engine.

Engine alternatives for the SST

In the next article, we will investigate three different types of engine and see if they can fulfill the needs we have outlined above.

We will look at the turbofan based on our EJ200 core with a By-Pass Ratio (BPR) of 2. We will also design an alternative engine with a BPR of 1 with the same core. Finally, we will compare these two with a turbojet, the type used by Concorde and the final version of the Tu-144.

We will discuss why a turbojet is an attractive engine for a Mach 2 SST, if the take-off noise problem could be solved. We will also discuss why by-pass engines cannot excel in an SST application, like they do for normal airliners.

One Comment on “The Boom SST engine problem, Part 3”