December 08, 2016, ©. Leeham Co: We have now come to the turbine in our trip through a modern turbofan.  The turbines make up the rear of the engine, before the propelling nozzle.

The turbines are the workhorses in the engine. They take the energy released by the fuel in the combustion chamber and convert it to shaft hp to drive the fan or compressors.

The hotter they can operate, the better. They can then generate more hp on a smaller size turbine. The temperature of the gas entering the high pressure compressor is one of the key parameters of a gas turbine. It dictates the power efficiency of the core and how much work it can perform to drive the fan and the compressors.

The turbine functions as a reaction device. Hot gas from the combustor is accelerated to high speed in the exit nozzle of the combustor and directed to the blades of the turbine, Figure 2. Most turbines are axial. Only very small turbines for APUs, etc., are made as radial turbines because they don’t handle large mass flows very well.

To work in the high temperatures (up to 1700°C for a High Pressure Turbine), the nozzles (turbine stators, which precede the turbine rotors are often called nozzles) and the turbine rotors/blades are air cooled. Figure 3 shows the cooling of a CFM56-5C’s high pressure turbine nozzle (many Figures are from a manual for the CFM56-5C for the Airbus A340). 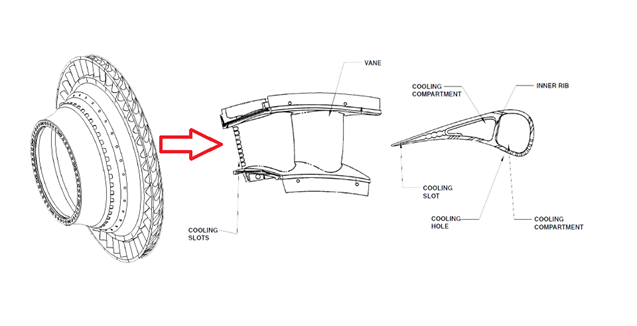 The cooling air is from the last stage of the compressor. Otherwise, the pressure would be too low. The pressure loss in a combustor is around 3%-5% and this makes it possible to have higher pressure compressor air to cool the high pressure turbine.

Observe how the air is made to seep out of the profile through cooling slots, to form a protective film around the metal.  In addition, the manufacturers add protective ceramic coatings to the blades. The cooling and the coatings allow the gas temperature to go way beyond what the nozzles and the blades would have managed without these measures.

The next figure (No. 4) shows the High Pressure Turbine (HPT) rotor and a cross section with the rotor with blade mounted and the nozzle ahead of it. The picture is interesting because the cooling flows are marked. The front face of the HPT is cooled with a flow from the combustor as it has the highest pressure level. Behind the HPT stage, the cooling air from the fourth stage has enough pressure to cool the rotor.

Finally, the bottom of the rotor, which is sealed from the upper areas, is cooled with Booster air. The usage of the lowest pressure and temperature air possible is very well shown in this graph. 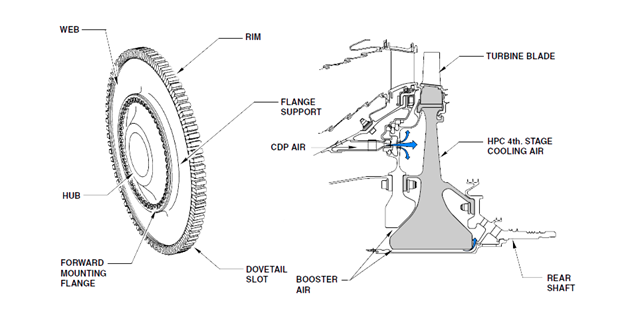 In Figure 5, the rotor blade cooling is shown. It uses similar principles to the nozzle cooling. The CFM56-5c was designed some 20 years ago, modern blades have even more intricate channels for cooling. Normally the HPT is cooled in turbofans, but one tries to avoid the elaborate and expensive cooled hollow blades for the Low Pressure Turbine. If possible, only the stationary first nozzle is cooled for the Low Pressure Turbine. 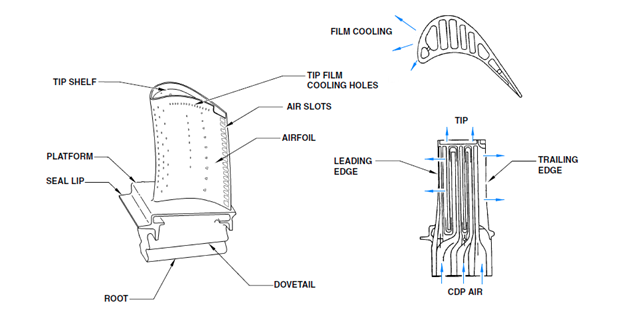 The next figure (No. 6) shows the elaborate sealing that must be done for each stage.

Figure 6. The knife edge seals for the HPT rotor of the CFM56-5C. Source: CFM.

The expansion or contraction of the manifolds will work on the shrouds and thereby control the tip clearance of the rotor blades.

The Low Pressure Turbine (LPT) drives the fan and booster in two shaft engine and the fan in a three shaft engine. For an engine the class of CFM56-5C, there are about 30,000hp needed to drive the fan and booster. As the fan has a large diameter (72 inch in a CFM56-5C), the low pressure shaft rotates with maximum 4,500RPM. The high pressure shaft rotates with 15,000RPM as a comparison.

This means that the LPT blades would have a low speed if they would stay at the same diameter as the HPT. The capture of energy from the high pressure exhaust gas would suffer; power transfer efficiency would be low at low blade speeds. The LPT is therefore laid out with blades on progressively larger diameter.

Figure 8 shows the LPT static parts for the CFM56-5C. Clearly visible in the picture are the cooling tubes for the LPT tip clearance control (LPT manifold).

Figure 9 shows the architecture used by Rolls-Royce for their turbines. Rolls-Royce integrates the shroud on the turbine blade tips. This has tip loss advantages. The blades get heavier, though, and most engine manufacturers have chosen active tip clearance instead of shrouded blades today. 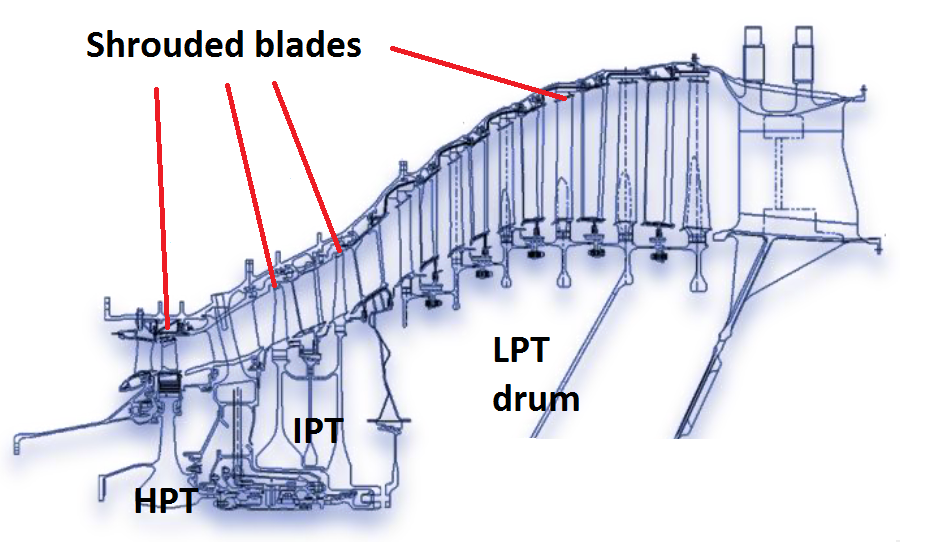 Rolls-Royce has introduced a non-shrouded HPT on the 97klbf Trent XWB, using a casing with active clearance control.

Because of the large diameters and the many stages needed to transfer the hp required to the fan, LPTs get larger and heavier. The HPT and initial stages of the LPT must be made with Nickel based alloys because of the high temperatures. For the final stages of the LPT, the temperatures are low enough so that a Titanium-based alloy,  Titanium Aluminide, can be used, which is considerably lighter the Nickel Alloys.

An alternative way to lower LPT weight is to allow it to spin faster by introducing a gearbox to slow down the fan shaft. We will discuss this in a later Corner.