Editor’s note: We don’t typically do “trip reports;” this isn’t the scope of LNC. But occasionally one crosses our desk that we find of interest. One of our readers, William Bain, provided the following to us and we thought it interesting to share. 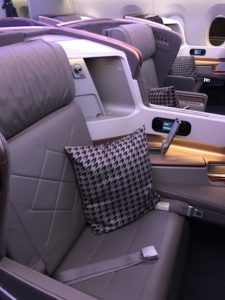 I flew Singapore Airlines’ Airbus A350 service from Singapore to Amsterdam.  The outbound flight was operated by 9V SMD and the inbound flight by 9V SME.  I was seated in the premium economy cabin.

By way of starting, I think people spend too much time say this or that model is better, as such, than that model.  There’s been a fair bit of that in relation to the A350 and Boeing 787.  But in my view much, if not most, of the comfort factor is down to the configuration used by specific airlines.  For example, I was underwhelmed by the Qatar Airways 787 but very much liked the ANA 787.

My initial impressions of the A350 are generally favourable, and I suspect that most people will like the aircraft.  But there were what I would describe as some niggling issues to note, which took some of the sheen off what was otherwise a highly anticipated flight.

My overall impression is that, while there is nothing to truly dislike, I did not experience a wow factor.  I say that because I remember the first time I boarded a 787 I did have that ‘wow’ moment.

I did not think the A350 imparted the same sense of spaciousness as the 787.  I realise that the A350 has a larger cross section, but from a perception standpoint the cabin didn’t feel as open and airy.

I cannot say too much about one of the competitive claims that Airbus makes for the A350 in relation to the 787, namely wider seats, because I was in premium economy (most of my flying is in economy).  In any case, I am not as sensitive to that issue as perhaps others are: while I am six feet tall, I’m pretty slim. 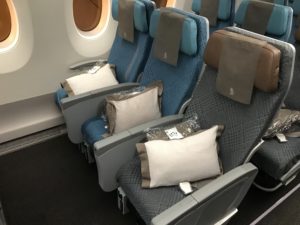 Perhaps I was expecting too much in terms of cabin quietness (from what I’ve read) but there were times when the engine noise was greater than expected.  I certainly do not mean to suggest that the cabin was loud, but (and leaving aside technical data) I would not describe it as quieter than the 787, and perhaps not much more than the upper deck economy cabin on the SQ A380.

If there was one genuine design issue that I did not like it was the overhead bins.  They do not have a good handle or latch to hold on to, which means that I had to push on the curved surface to stow the bin.  I found this to be slippery, and with a fully loaded bin (mine wasn’t), I suspect some people might struggle to get the bin closed easily.  There is a horizontal groove on the bin but it is too low to be of any use.

The final observation relates to the complaints about standard of finish on the A350, mainly from Qatar (it is hard to know what to make of those complaints because CEO Akbar Al-Baker complains about everything).  I mention this because there were several niggling issues with 9V SMD.  The tray in my armrest was misaligned, so a fair bit of force had to be used to deploy and stow it.  Also, two drawers in one of the toilets kept coming open, which was annoying.

I was surprised by these admittedly minor issues, but it was a brand new aircraft.  But, these issues aside, no one who is serious is going to say that this is a bad aircraft.

One final note, although one that is more of a Business Traveler issue than a Leeham News issue, is that I really liked the new SQ entertainment system.  You can access what is on offer on the SQ app before flying and select what you want to watch and listen to; then it is a matter of linking your phone to the onboard entertainment system via the wifi system and everything you want to watch is there ready to go.  The system can also be controlled from your phone and it allows a degree of multitasking.  If there was anything that did impress me on the flight, it was that.

Comparisons?  It really does depend on the operating airline I think.  On the noise issue, there isn’t enough in it to say that someone would or should choose the A350 over the 787, or vice versa.

I did sneak a check of the economy seats on the A350 and I would prefer the SQ A350 over the Qatar 787.  The QR 787 seats are too thin and hard, and worse, some engineer thought it a good idea to put an entertainment box under the seat at every window and aisle position.

I will be flying the Qatar A350 in four weeks, so that will make for an interesting comparison.  If forced to choose, I would probably opt for the ANA 787 over the SQ A350 (but always with the excellent SQ flight crew!), mainly due to the aesthetics of the cabin.

I also really liked the ANA seat.  I also think the A380 upper deck is really nice, but I actively avoid flights that would have me on the main deck—the cabin floor at the window seats is narrower than the space and shoulder height, the result being that those seats are more cramped than you might think.