Next round in Airbus-Boeing WTO battle nears

The parties received on Feb. 9 the written decision by the US International Trade Commission and the public version, redacted of confidential and proprietary information, will be released March 2. Boeing is deciding whether to appeal its loss to the Court of International Trade or NAFTA.

But this isn’t the only trade issue on the table.

The Seattle Times last Sunday detailed Boeing’s current thinking that it has Airbus at a looming disadvantage. The same article quoted an Airbus official claiming the EU’s nuclear button is bigger than the USA’s in this trade fight.

”The U.S. government could then slap punitive tariffs up to that amount on whatever EU goods it selects for maximum political impact,” The Times reported. This means any tariffs could be assessed on products that are not associated with Airbus or Boeing, a mechanism that can mug innocent parties to the trade dispute.

It also means the US Trade Representative could seek to impose tariffs on imported Airbus aircraft.

If the WTO upholds a separate ruling that the billions of dollars in tax breaks given by Washington State in 2003 for the assembly of the Boeing 787 are illegal, which the US appealed, the EU would be free to impose tariffs on unrelated US goods or on Boeing aircraft.

LNC checked the Airbus and Boeing web sites for the current backlogs in the US and the EU. The table below does not list Unidentified customers or their countries.

The companies report their backlogs differently. Boeing lists by country, making an EU check easy. Airbus lists by customer and region, but not country (although in this case, only US customers are relevant).

The Airbus customers highlighted in yellow are lessors. 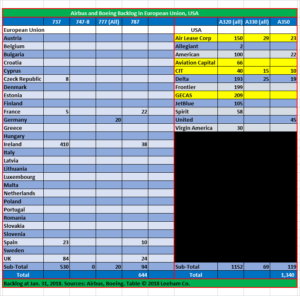 Although lessors boost the Airbus backlog considerably, not all Airbus aircraft might be imported to the US by lessors and therefore would be exempt from tariffs. It should also be noted that CIT is now part of the Irish lessor Avolon and probably no longer qualifies as a US company.

However, Boeing may have hoisted itself a bit on its own petard.

Since the Mobile plant is intended to produce for the US market, these aircraft would appear to exempt for any tariffs. Some of the A320 family airplanes may still be scheduled to come from Airbus plants in Hamburg and Toulouse so the precise number that theoretically are potentially subject to tariffs is unknown. Likewise, the number of lessor-owned aircraft destined for US airlines is unknown.

Excluding the A320s and the lessor-ordered wide-bodies, there are 112 known wide-bodies destined for US airlines that potentially could be subject to tariffs.

Boeing exposure in the EU

Boeing has considerably fewer orders outstanding in the EU than Airbus has to the US.

More than 200 are to Irish-based leasing companies. As with Airbus, some of these aircraft will be destined outside the EU and unlikely to be subject to tariffs.

The number of aircraft for Airbus and Boeing subject to potential tariffs will certainly be reduced by those delivered before tariffs are imposed.

Presumably the Airbus and Boeing could repay the illegal subsidies and tax breaks and avoid tariffs if the respective appeals are lost.

If the WTO appeals process upholds the original ruling that the Washington State tax breaks are illegal, he state is under contractual obligation dating to 2003 to replace the breaks with an in-kind amount.

As it happens, a few years ago Gov. Jay Inslee proposed a carbon tax across the state to reduce the environmental impact of carbons. Boeing was exempted from this proposed tax.

The tax didn’t pass the Legislature, but it’s back this session. Once again, Boeing is exempt from the proposed tax.

This is believed to be the replacement tax benefit if Boeing loses at the WTO. If not, and the carbon tax passes this time, Boeing stands to gain a major windfall tax break.

← Norwegian flies in thin air
No harm to Boeing, no threat to US aerospace, ITC finds →

11 Comments on “Next round in Airbus-Boeing WTO battle nears”