In the passing week, more facts have been revealed. We also have the first lead why both the Lion Air and Ethiopian Airlines flights finally dived to the ground.

The data from the Flight Data and Voice Recorders have been read out by the French Bureau d’Enquetes et d’Analyses (BEA) and sent to the Ethiopian authorities, who lead the investigation.

The conclusion is then we have another Angle of Attack (AoA) fault of 22 degrees, which invokes stall warning at rotation and subsequently MCAS trimming once flaps are retracted.

The trim jack of ET302 was also found with the trim position full nose down. Why the crew didn’t switch the trim system off we will know in due time.

We now know the crew which did switch the trim switches off, the flight before JT610, did so because a third Pilot from the sister company Batik air, flying clap seat in the JT043 cockpit, could observe the cacophony of actions an AoA disagree of 22 degrees invokes.

He had a free head as he had no flight role. He was the one which proposed switching the trim switches off after having seen the usual trimming from Speed Trim after takeoff not stopping. It was also trimming in the wrong direction (Speed Trim helps the Pilot with the feel of the aircraft by trimming in the background during takeoff and initial climb, mostly trimming nose up).

The Captain switched the trim off, check how this felt, then switched it on again and finally decided the switches off were better. He did not reach this conclusion because he observed a trim runaway.

The constant trimming in the background when flying manually is a normal state for a 737, especially after takeoff. Speed Trim is at work. Trim Runaway is when the trim is running full speed in one direction only. This did not happen, neither when Speed Trim was active (before flaps up) nor when MCAS took over.

What the JT610 Pilots worked on until they crashed

We now know the Captain of JT610 was calm during the fatal flight. He flew the aircraft and asked the First Officer (FO) to go through the Quick Reference Handbook (QRH) which contains the Emergency checklists, to find the relevant emergency procedure for the strange behavior of the aircraft.

As the FO couldn’t find anything which fitted to their situation, the Captain handed the FO the control of the aircraft (after line A in Figure 2) and took the QRH to see if he could find a cure for the sick aircraft.

The Captain had successfully counter trimmed MCAS 21 times and probably told the FO to do the same. The FO trimmed, but he did it in too short periods, B in Figure 2. Gradually the MCAS got the trim moved more and more nose down (the top A in Figure 2). 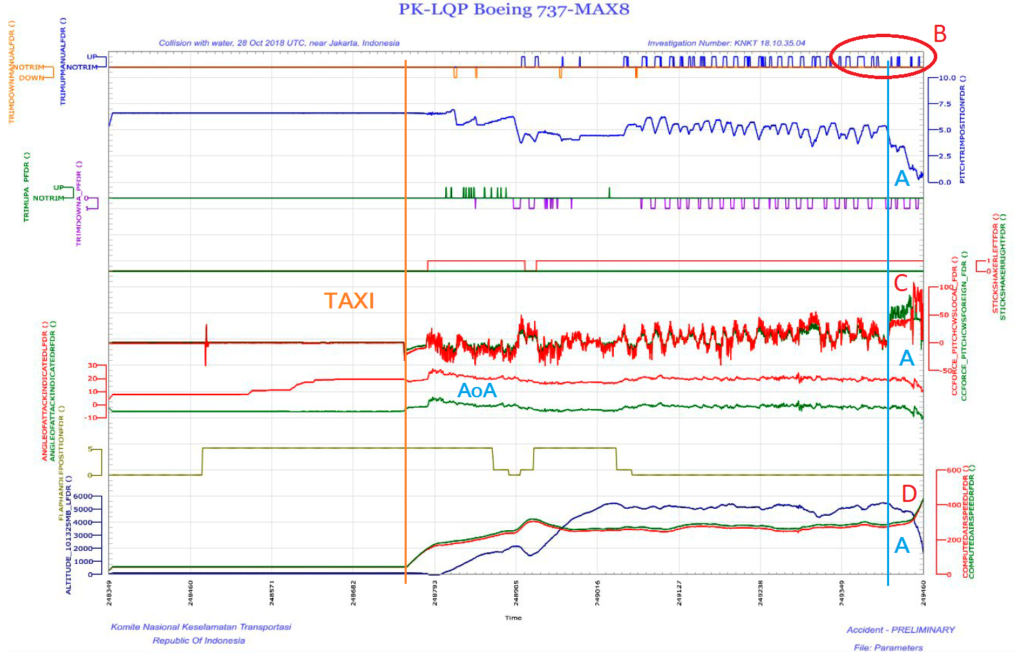 I know from pilots who have tested to fly a 737 in the simulator that you can keep the nose up with the Pilot controlled elevator, even against a full nose down trimmed horizontal stabilizer.

So why did JT610 and ET302 dive and crash? The pilots held against as the simulator pilots did? We know this for sure for JT610 where we have the Column force traces (C in Figure 2) and can assume this for ET302.

The cause of the final dive has bugged me since the Flight Data Recorder (FDR) traces from JT601 were released. I couldn’t find a plausible answer. I tried different theories but none was convincing.

This week a poster in the Professional Pilot’s forum revealed the Boeing 737 has a blowback elevator problem at high dynamic pressures (thanks Dominic Gates of the Seattle Times for pointing me to this post). Now the penny dropped.

I know all about blowback problems of elevators. It was the most dangerous shortcoming of the fighter I flew, the SAAB J35 Draken. Even more dangerous than its famous “Super stall”, a Pugachev Cobra like deep stall behavior the aircraft would only exit from if you “rock it out” of the stall (more on this some other time). While “Super stall” is scary, Blowback is deadly.

If a blowback phenomenon is confirmed for the 737 at the speeds and altitudes flown, this is what happened at the end of the JT610 flight and probably ET302.

When a pilot experiences a stall warning like a stick shaker, his reaction is to lower the nose and increase the speed. He wants to build a margin to an eventual stall. If he simultaneously has “Unreliable airspeed” warning, the built margin will be larger.

In both of these cases, the pilots are flying faster than normal at the low altitudes they flew (5,000ft pressure altitude for JT610, 9,000ft for ET302). This is to build a safety margin while sorting out stall warning and flight control problems.

As they pass 300kts they enter the area of elevator blowback according to the poster. As the FO is losing the nose due to short counter trims against MCAS at B in Figure 2, the speed increases at the same time as more angle is required to keep the nose level.

As blowback stops him from getting the elevator angle he needs, the aircraft started a dive at D and speed increased further. The FO pulls harder but nothing happens (C in Figure 2). The Captain now stops reading the QRH and pulls as well. It’s too late. The elevator is gradually blown down to lower and lower angles as the speed increases and the dive deepens.

What could have been done?

The only remedy to the blowback induced dive would have been a full nose up trim application, for a long time (throttles to idle and air brake would also have helped). But the reaction to trim is slow and the aircraft was now heading for earth. The reflex is not to trim but to pull for all there is, by both pilots, you have seconds to stop the dive. It didn’t help.

If this is confirmed as the scenario for the end of both JT610 and ET302 I wonder why the danger of flying to fast at low altitude, while sorting out a raiding MCAS, was not communicated when the MCAS Airworthiness Directive was released after the JT610 crash.

MCAS forcing the horizontal stabilizer to full nose down should not have doomed JT610 or ET302. Their applied speed margins did.

The JT610 crew knew nothing about MCAS and a potential blowback problem. The ET302 crew knew about the MCAS problem but not about the danger of flying to fast while sorting MCAS.

I have checked with longtime pilots of the 737. They have not heard of a Blowback problem when flying at elevated speeds at low altitude. And before MCAS there was no reason to, it was beyond normal flying practice.

But the JT610 investigators saw what can happen when you run into the MCAS rodeo. Why didn’t they warn to keep speeds within normal speed range for the altitude?