Airbus, Boeing backlogs in US, EU and tariff exposure

April 25, 2019, © Leeham News: With the European Union now listing aircraft among the US products that will be subject to tariffs, in retaliation for the United States plan to levy tariffs on airplanes and other goods, Airbus faces a greater exposure than Boeing in a trade war.

The US proposes tariffs on aircraft, fuselages, wings and other components produced by the four Airbus member states: France, Germany, Spain and the UK.

Airbus backlog to the US

Airbus has a greater backlog of airplanes to the US than Boeing has to the EU. This is true even after excluding the A220 (see Brexit, below).

Delta Air Lines is, by far, the US customer with the largest backlog with Airbus. As with the former Bombardier C Series order, with which Delta had a contract that protected it from paying duties, it’s likely the same holds true for any Airbus aircraft.

It would be surprising if any of the US customers don’t have this protection in their contracts.

Thus, Airbus would be faced with paying the tariff, rendering importation uneconomical.

Mega-lessor GECAS is the next largest US customer for Airbus. But while it’s a US-based company, not all aircraft will be destined for US airlines. Data on the intended lessee remains spotty, given the lengthy timeline of deliveries. The true exposure here is unclear.

JetBlue is the third largest customer, but 60 of its 145 Airbus airplanes in backlog are for the A220. With the uncertainties surrounding whether this airplane is covered by the proposed tariffs (see Brexit), the exposure is unclear.

Lessor Aviation Capital Corp (ACG), like GECAS, will lease much of its A320 family orders outside the US. As with GECAS, the true exposure is unclear because future lessees aren’t identified in data at this early time.

Orders from United Airlines and Virgin America are uncertain. United is already said to not really want the 45 A350s. It’s a nearly exclusive Boeing customer. United could cancel the A350s with nominal penalties, say those familiar with the deal.

Alaska Airlines now owns Virgin America and has publicly said this order for 30 A320neos could be canceled with little penalty. Before acquiring Virgin, Alaska was an exclusive Boeing customer. It likes the A321neo (but for the teething issues with the CFM LEAP engines), but CEO Brad Tilden really likes the simplicity that comes with the single fleet type at mainline Alaska.

The carrier has yet to decide if it wants to keep a dual fleet type or back to a single fleet type.

Airbus has a US final assembly line for the A320 and is constructing one for the A220. Ordinarily, this would qualify the finished airplanes as US domestic product. In fact, in its trade complaint against Bombardier over C Series sales into the US, Boeing even wrote that the Mobile Airbus plant qualified the A319 (and by extension, the A320 and A321) as a domestic product.

But the Trump Administration’s proposed tariffs gets around this. It proposes levying tariffs on imported fuselages, wings and other components, not just the finished airplane. Since Mobile assembles the airplanes from imported wings, fuselages and components, the tariffs apply.

Boeing’s backlog to the UK

Ireland is the huge center of Boeing’s backlog in the EU. Ryanair and a bevy of lessors based in Dublin are the reasons why.

As with the US lessors, most of the Boeing aircraft ordered by Irish lessors will be delivered outside the EU. It’s unclear how much true exposure Boeing has for these airplanes. 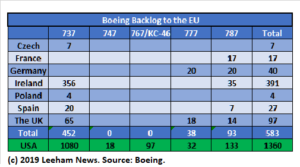 After Ireland, the UK represents the largest backlog for Boeing. Brexit complicates its relevance. (See below.)

For the moment, the UK remains part of the EU. Brexit has yet to go into effect. It’s unclear if the UK’s exit will remove it from any tariffs or if the Trump Administration will try to include the UK for its legacy role in the EU and Airbus—or whether separate tariffs will be levied.

None of the tariffs can go into effect until the WTO arbitrator reviews the damage claims and renders a decision.

Airbus is ending the A380 program and say that, based on past WTO decisions, any claims of damages from this program are now moot. It says claims on the A350 program are minimal.

The US claims the damages from Washington State tax breaks that are illegal under WTO rules are minimal.

One Comment on “Airbus, Boeing backlogs in US, EU and tariff exposure”