Nov. 1, 2019, © Leeham News: It was simplistic in design, had a graduated and limited input into the pitch control system and details were included in the relevant training, operational and maintenance manuals.  It worked seamlessly and because of this its existence, and reason for installation, has eluded most people in the industry.  The system was installed not as a result of a recommendation or regulation imposed by the FAA but at the insistence of the Air Registration Board (now the Civil Aviation Authority) of the United Kingdom.

But first, some relevant background.

The grounding of the 737 MAX aircraft will have permanent and wide ranging repercussions throughout the global aviation industry as regulators seek to understand in greater detail the underlying assumptions utilised by the FAA and Boeing during the certification of the MCAS (Maneuvering Characteristics Augmentation System) architecture.   The regulatory system governing the flow of information required by the international bi-laterals when certifying new products will, and already has, come under intense scrutiny, with the result that delays and additional oversight of other programmes will now invariably result.

The 737 program has long been viewed as Boeing’s dependable cash cow and over the years it has permitted the Company to develop and invest in other very cash hungry models which serve relatively small markets.  Launching and delivering the MAX was an absolute priority to the Boeing company not only from a financial perspective but also because its competitor, the Airbus A320neo, was amassing orders and increasing its own market share.

In order for the MAX to be accepted as a certified 737 variant it had to retain similar flying characteristics and, to a large degree, the same systems to ensure that a separate type certificate was not deemed necessary. If the FAA determined that there was not sufficient commonality between the MAX and the NG, its predecessor, then Boeing would have been forced to spend billions of dollars certifying what on paper was, except for notable exceptions, another 737 variant.

This re-certification exercise would have vastly reduced the amount of profit per delivery position compared to the current 737 model, as a significant proportion of the 737 MAX research and design costs had already been amortised throughout the 737 NG production run.  If it were determined that a new type certificate was required, then this would have most likely rendered the current programme un-economical and Boeing would have been forced to re-consider an all new short haul design.  Consequently, from a commercial perspective the need to retain as much commonality as possible, yet provide a competitive model, was absolutely critical.

Much has already been published about the 737 MAX MCAS system which was introduced to effectively nullify the control handling differences between the NG and MAX, at specific attitudes, weights and C of G.  Compared to the 737 NG the MAX requires increased thrust, which in turn dictated a larger engine nacelle.  Boeing rejected the idea of extending landing gear oleos so the larger engines could only be accommodated by extending and raising the pylon.  The net effect of this displacement resulted in a corresponding forward shift in the Centre of Pressure at higher angles of attack, typically encountered when approaching a stall.  We understand that this effect, which only occurred during specific flight conditions, has the tendency to implement a pitch up motion, which was not experienced on the NG.

This particular aerodynamic ‘pitch up’ effect on jet transport aircraft is not new.  One should remember that the 1950s and 1960s, which saw the introduction of the high speed wing coupled with different aircraft configurations, represented a period when aerodynamicists and pilots, sometimes to their own cost, learned practically all there was to know about high and slow speed flight.   At that time, as an industry, we also learnt about how those systems which assist pilots to operate throughout the flight envelope in a safe manner, can be implemented.

Additional Certification Requirements to the 707 by the UK CAA

Prior to the introduction of the European Aviation Safety Agency (EASA) each country, should it elect to, was responsible for approving each model and variant destined to be operated by their own domiciled carriers.  As a result of its own aircraft manufacturing industry the United Kingdom (UK) was in reality the only other country in the world that could effectively complete an independent airworthiness review of an aircraft.   Each foreign aircraft that was to be registered with the UK authorities underwent a review of its design and, equally important, was also subject to rigorous flight tests.

In his book Handling the Big Jets (first published in 1967) D. P. Davies, formally head of the flight test department of the UK Air Registration Board (ARB), now the CAA, describes at length the different stalling characteristics exhibited by aircraft with different wing and tail configurations.  He personally test-flew every new jet aircraft model that was destined to fly with UK operators, such as BOAC and BEA.  Davies also describes the various control systems that were incorporated on both British and American aircraft that reduced the possibility of a line pilot entering a stall.   Details of flying characteristics and the use of automated control systems at high angles of attack are also included.

Davies is best known for mandating the fin of the Boeing 707 be lengthened by approximately 36 inches in order to achieve published Vmcg speeds (minimum control speed on the ground).  Boeing ultimately accepted Davies recommendation and, we understand, halted production of the 707 for 10-11 months, whilst a new fin was designed and installed.  All existing 707s were then retrospectively modified.  A ventral fin was also installed on some variants to prevent ‘fully stalled take-offs’ which the Comet was also susceptible to.

Whilst test flying the 707-400 series at Renton, Davies noted that with the first stage of flap selected, the aircraft had a tendency to pitch up just prior to entering the stall.  This was determined to be caused by the inboard leading edge devices, peculiar only to the 707-3/400 series which, when extended, effectively retained lift to higher angles of attack, and moved the Center of Pressure forwards, causing the nose to pitch up.   Davies was not comfortable with this pitch up tendency and insisted that all UK certified 707 series aircraft were modified with the installation of a ‘stick nudger’ system. 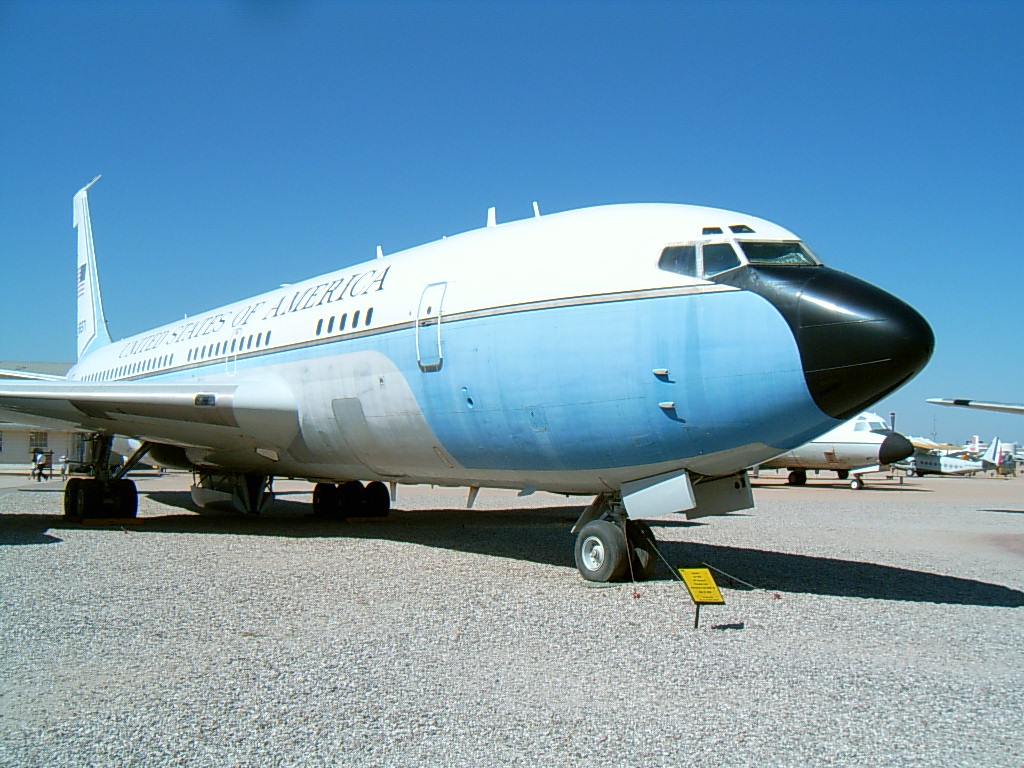 In his book Davies stated that “The stick nudger introduces a small force into the elevator circuit which imposes positive stick free stability and removed the otherwise self-stalling tendency”.  He goes onto to say that “as its input is so small all the runaway cases are completely innocuous.”

The ‘stick nudger’ should not be confused with a ‘stick pusher’, which is an entirely different system with a different objective.  The stick pusher is typically installed on aircraft with T tail configurations which are susceptible to “super deep” stalls, such as the Bae 146 and Bac 1-11.  All those Boeing 727s on the UK register were also modified with a stick pusher.

Reference to the relevant B707-320 Operations Manual, dated January 1974, reveals the following schematic which details the anti-stalling systems, which also included a Stick Shaker.

In the case of the B707 the “stick nudger” consisted of an electrical linear actuator connected to the rear elevator quadrant.  When activated at higher angles of attack, as sensed by the underwing vanes, the actuator would begin to wind and effectively back drive the control column forward, resulting in a maximum force of 15 lbs (7Kg).   The system did not have any cut out switches. In the event that the actuator needed to be isolated a single 5A DC circuit breaker was connected to the Essential Radio Bus. 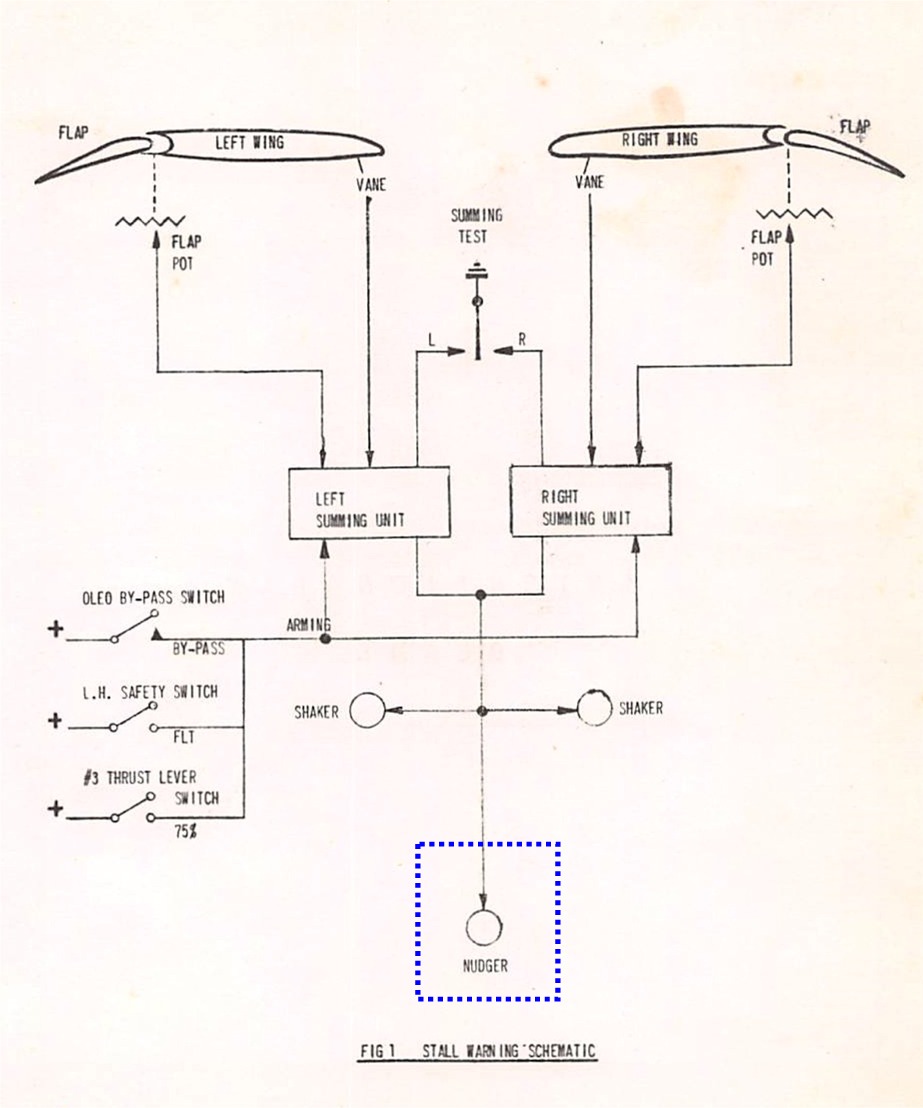 There are fundamental differences in the design of this system compared to that of the more advanced 737 MAX.

The article illustrates how an un-wanted aerodynamic effect, which only occurred in particular variants of the B707, during a particular phase of flight, was eradicated in a safe and logical manner.   The two aerodynamic anomalies experienced on the 707 and 737 MAX are not exactly the same however, given the information released to the public, it is fair to assume that there are similarities between the two resulting effects.

It also demonstrates that although regulatory bilaterals should ease the administrative burden and reduce the overall cost of certifying a new product to varying regulations, there is no substitute for competent authorities to physically test fly each aircraft.  Flying an aircraft and understanding its handling characteristics, and how they compare to another variant, is very much a tactile and individual experience, and should be undertaken by more than just one authority.

In our opinion, the MAX will be the last iteration of a very successful 737 program.  The continued grounding of the MAX variant has proven to Boeing, and the industry at large, that in order to continually produce a technological, cost efficient and commercially competitive product it is simply un-realistic to expect iterative re-designs to provide the ultimate solution.

In this respect Airbus has a distinct advantage with the A320neo family, who’s digital flight control software can be amended, to a limited extent, to take into account varying aerodynamic profiles.   Airbus’ decision to incorporate a fly by wire control system in the 1980s was a bold but ultimately wise decision.

It is still not clear when the 737MAX will return to service or what additional modifications will be required by the FAA and EASA.   The various investigations underway internally within Boeing and separately by the US Government and associated parties, such as EASA, will ultimately bring about seismic changes to procedures.  The lessons learnt during this period will only make current and future generation aircraft safer for the travelling public however we should also remember that many of the problems encountered today were first resolved 60 years ago.