November 1, 2019, ©. Leeham News: We start the series on analyzing the Lion Air 737 MAX crash by looking at what went wrong in the aircraft. It’s important to understand MCAS is not part of what went wrong. It worked as designed during all seven Lion Air flights we will analyze in this series.

It was a single sensor giving a faulty value that was wrong with these aircraft. How a single faulty sensor could get MCAS to doom the JT610 flight (called LNI610 in the report) is something we look into later in the series. Now we focus on why the sensor came to give a faulty value for five out of seven Lion Air flights and how these flights could be exposed to two different sensor faults.

What went wrong in the Lion Air flights?

The final crash report of Lion Air LNI610 gives us the details so we can now conclude what went wrong during the LNI610 flight but also for four out of six flights before LNI610.

We know the culprit for the LNI610 flight and the previous flight LNI043 was a faulty Angle of Attack (AoA) sensor. But there was trouble on flights before these and what was the exact fault on flights LNI043 and LNI610?

The final report gives enough details that the probable fault cause for all flights can be deduced. There was an intermittently faulty AoA sensor during five flights before LNI043, the flight before LNI610 which had the AoA sensor replaced with a misaligned sensor from the Lion Air spares replacement pool. 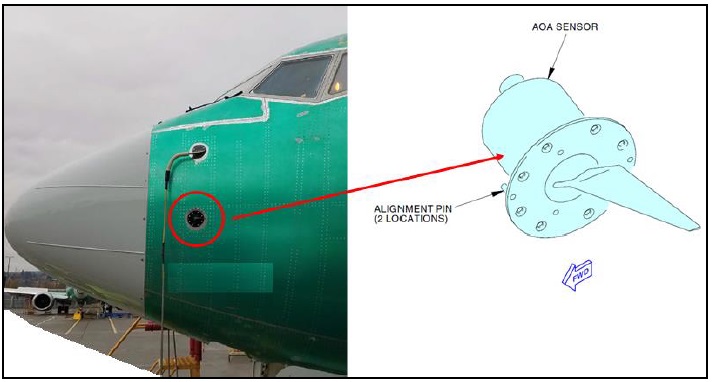 The AoA sensor is of a common type from Rosemount Aerospace (Figure 1), today part of Collins Aerospace. The sensor has a wing-like vane which follows the local airflow. It’s coupled to two resolvers over its rotatable mounting drum. Resolvers are well known and reliable transducers transmitting their angle information over electrical cables to avionics boxes.

During three of the five flights before LNI043, the crews complained about speed and altitude flags appearing on the Captain’s instruments, declaring the data was not valid. Before the LNI043 flight, the AoA sensor was replaced with a refurbished unit from Lion Air’s spare parts pool.

The replaced unit was subsequently examined for faults and an intermittent open circuit was found in the resolver feeding the ADIRU/FCC. During flights, the AoA signal to the ADIRU/FCC could disappear, then later in the flight or when tested on the ground be OK again.

When there was no AoA signal sent to the FCC from the ADIRU, MCAS was not triggered as it does not work without a valid AoA signal and when the signal was present it showed normal AoA, hence MCAS was not called for.

The intermittent functioning AoA vane was finally giving clear AoA fault indications in the Onboard Maintenance Function (OMF), a maintenance information concentrator introduced for the 737 MAX. The 737 MAX Aircraft Maintenance Manual (AMF), which had guided all maintenance actions around the faulty sensors, said the sensor should be changed.

Replacement Angle of Attack vane with a bias

The investigators conclude the replacement sensor was functioning correctly electrically but had a +21° bias fault. They conclude this from the traces registered on the aircraft’s Flight Data Recorder which shows how the sensor follows the right sensor with a +21° difference at all times when the systems are on.

This resulted in an immediate stall warning when the LNI043 MAX rotated as the landing gear switch said the aircraft was flying (no systems rely on AoA information at a slower speed than lift-off speed as the sensors are unreliable in their angle information before there is fast enough airflow past them) and both the SMYD and ADIRU are now fed with a signal which is 21° to high.

A 737 MAX stall is at around 20° AoA with slats and flaps deployed and the left AoA vane was now feeding the SMYD and ADIRU with about 30° AoA (21° plus the actual angle of attack). When the flaps were retracted MCAS activated and we know the result. We will analyze this phase in detail in later Corners.

Now we look at what the investigation concludes about how an AoA vane with a +21° faulty bias (it should be 0°) could pass into the Lion Air pool of replacement spare parts and how it could be fitted on the aircraft without the mechanic discovering it gave the wrong values.

The unit was refurbished to a serviceable standard from a replaced unit on another 737 by a licensed maintenance shop in Florida. The investigation found the shop used a verification procedure for the correct functioning of the unit which could result in a 21° faulty bias.

According to the maintenance procedures for the MAX, this should have been discovered at the installation and verification of the unit on the Lion Air MAX. The mechanic can use a procedure that required no special tools, where he installs the unit, then let it be held in a fixed position and goes and read the angle value on the front of the SMYD unit in the Avionics bay below the cockpit, Figure 2. 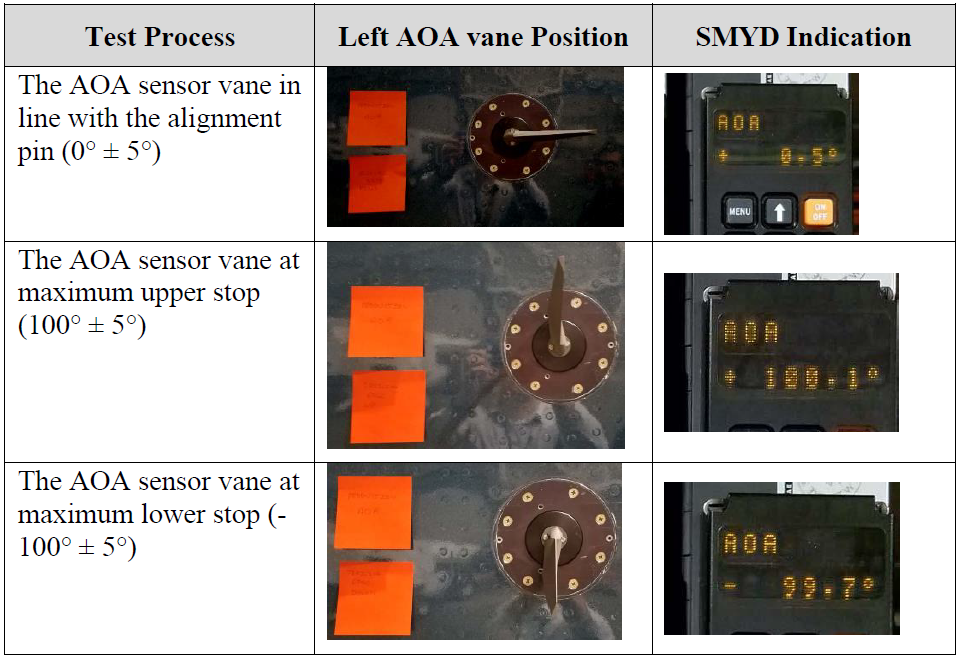 Figure 2. The test of the vane positions with the reading of the transmitted AoA on the SMYD unit. Source: JT610 final report.

The mechanic has not been able to prove he did this check. His presented photo evidence of such a check has been proven as false according to the investigation. A presented cockpit photo of the pilot’s displays was from before the sensor change and a photo of the SMYD with a correct angle was proven as coming from another aircraft.

The investigation concludes the non-correct maintenance procedure by Lion Air’s mechanic let an incorrectly aligned AoA make its way onto the aircraft for the LNI043 flight.

To make the sensor story complete, the assumption of what happened with the AoA sensor of Ethiopian Airlines ET302 is the vane was ripped off by a bird collision at lift-off. The behavior of the sensor after lift-off is consistent with a sensor with the vane missing. It tumbles to a value above +70° which was the case for ET302.

In the next Corners, we will look into how such faults can be allowed to bring down a modern airliner.