Nov. 5, 2019, © Leeham News: Boeing already has racked up $9.2bn in one-time charges and additional costs to the accounting block in the 737 MAX crisis.

Some expect there will be more substantial charges before the dust settles. Even Boeing officials said it will be years before all customer claims are settled. Legal liabilities are only partially covered by insurance.

Program accounting, which is unique to the US, allows a company to spread the costs of an expensive development over the anticipated life of the program and the forecasted orders.

Other countries require unit accounting or charging off costs as they occur during development.

Boeing is one of few companies in the US to use program accounting. This masks current charges in the GAAP-approved financial statements. A few years ago, Boeing also began reporting non-GAAP numbers on the basis of unit costs as additional information.

With one-time charges and added costs to program accounting assumptions related to the 737 MAX grounding, Boeing’s accounting policies are back in the spotlight. The accounting policy became controversial as deferred production costs spiked on the 787 program.

As commercial and defense programs faced cost overruns and delays, the company had to record billions of US Dollars in charges and various losses over the years.

LNA went through all of Boeing’s annual 10-K filings since 1996 to identify all the charges recorded on commercial and defense programs.

After recording billions in charges since Dennis Muilenburg became CEO in 2016, we assess whether there is more to come in future quarters.

Most industrial companies use unit-cost accounting. Under that methodology, the firm assesses the cost of producing every single unit. The profit on a given production unit is then:

If one uses such methodology for aircraft programs, the following usually happens:

The first units coming off the production line are expensive to produce. Those units require substantial rework and more man-hours. Combined with discounted pricing for launch customers, the company records hefty losses under the unit-cost accounting methodology.

As the assembly line gains in efficiency, unit production costs come down substantially. The company records larger and larger profits until the demand for product dwindles.

Boeing elected to use to program accounting in 2003. In a nutshell, this is how it works.

The profit on a given production unit under program accounting is then:

Program accounting effectively smoothens earnings. Earnings recorded in early delivery years will be higher than under unit-cost accounting. Conversely, they will be lower in later years to recover the deferred production costs.

One should note that deferred production costs include the cost of producing the aircraft themselves, as well as the amortization of production tools and non-recurring expenses.

How is that possible?

Some tests and early production units Boeing proved too problematic to sell. Instead of recording a charge, the company flushed them into Research and Production expenses: $2,693m in 2009 and $1,235 in 2016. This reduced deferred production costs by the same amount.

However, the main controversy was of a different order. Below is a plot of deferred production costs on major commercial aviation programs since 1996: 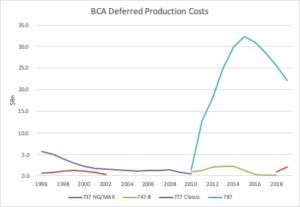 As well as the earnings in the Boeing Commercial Aircraft division under Program and Unit-Cost accounting since 2010: 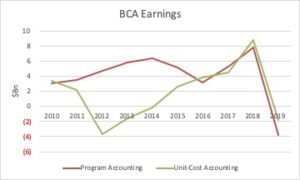 As one can see, the magnitude of those costs went through the roof on the Dreamliner program. They peaked at $32.4bn at the end of 2016. The highest level on another program was $5.6bn on the 777 Classic in 1996.

The costs of the 787 program delay materialized in deferred production costs. The first aircraft were stored for extended periods and required substantial rework.

Boeing has dodged the reach forward loss bullet so far due to a strong demand for the aircraft. As of Sept. 30, Boeing still has $22.1bn of deferred production costs to amortize over 706 units in the 1,600-strong accounting block. On Sept. 30, there were 556 787s in the backlog. Boeing announced with its 3Q2019 earnings call that it will reduce 787 production from 14/mo to 12/mo late next year due to soft demand.

Dozens of billions in charges

If we include the 737 MAX earnings charge, increased costs in the accounting quantity, provision for Jet Airways, and litigation charges, Boeing effectively took $9.85bn in charges year-to-date.

Charges are not an anomaly in Boeing’s history. Below is a plot with charges recorded every year since 2000. We also include the net earnings declared for the year. 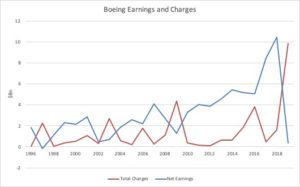 We excluded charges related to accounting changes, as well as retirement benefits. We included the 787 aircraft expensed into Research and Development mentioned before.

As one can see, Boeing recorded significant charges since 1996. The accumulated amount of those charges is $35.5bn. As a point of comparison, Boeing declared $76.7bn in earnings over the same period. Accounting for corporate taxes, LNA estimates that net earnings would have been at least $20bn higher over the period. 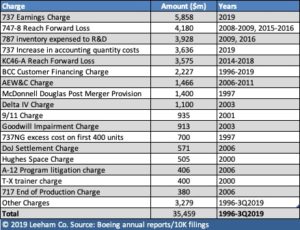 And more to come

Boeing has recorded $15.8bn in charges since Muilenburg became CEO in 2016.

While the 737 MAX has gathered most of the attention, Boeing is in trouble with the KC-46A program. Muilenburg’s Capitol Hill testimony included grilling on the military program from Rep. Garamendi.

Deliveries are running late. Elements of the aircraft, including the refueling boom, need rework. Delivered aircraft had foreign debris. Also, the aircraft cannot safely transport troops or cargo at the moment. Boeing hasn’t declared another reach-forward loss on the program this year, so a new one is likely in the next few quarters.

But these aren’t the only challenges facing Boeing. 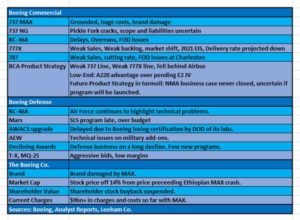 Other defense programs declared charge in 2018: $400m for the T-X trainer and $291 for the MQ-25 Stringray. The Mars SLS program is late and over budget. AWACS upgrade and AEW are running into technical issues. More charges from these programs are likely.

Of the $9+bn in charges on the 737 MAX, $3.6bn are in the form of increased costs in the program accounting. Those charges will result in lower profits on delivered aircraft going forward.

One should also expect a spike in deferred production costs on the 737 program in the next few quarters. Boeing already incurred sizable storage costs. The company will also hire scores of temporary workers to resume deliveries as fast as possible once the FAA lifts the grounding.

The last 747-8 deliveries will likely happen in 2022. More orders are unlikely. Boeing recorded $380m and $184m in charges for the closure of the 717 and 757 production lines, respectively. One should expect a charge of similar magnitude when the company announced the end of the Queen of the Skies production.

There is another elephant in the room.

It is no secret that the 777 Classic made an outsized contribution to profits at BCA while the company was sorting out 787 production issues. Boeing was hoping the 777X would continue this.

As outlined in a recent LNA article, demand for the 777X is likely materially less than Boeing envisioned. Boeing launched the program on expectations of 1,200 demand for very large aircraft. GE Aviation used that forecast in its public presentations.

The Boeing Internal Product Development forecast was 700-800. LNA estimates that the number is down to 500.

Some order cancellations from the Big Three Gulf carriers still need to be announced.

Boeing acknowledged in the 3Q2019 earnings call that deliveries would start in 2021 at the earliest. Testing is delayed, mostly due to durability issues with the GE9X.

With the delivery delay and uncertainty surrounding the 777X certification campaign after the 737 MAX debacle, Boeing will almost certainly book a charge in the next few quarters.

However, the hammer will fall when deliveries start. Boeing will have to announce the accounting block and production rates. With demand lower than Boeing envisioned, both will be lower.

The lower demand will translate into higher average production costs than at the time of the launch in 2013. Since Boeing is spending at least $5bn to develop the 777X, a multi-billion charge in 2021 is possible, if not likely.

The third quarter of 2019 revealed how critical the 737 is for Boeing’s profitability. Revenues in the Commercial aircraft division were down 41% year-over-year. Instead of recording $2bn in profits, BCA recorded a small loss.

The narrowbody accounts for close to 50% of revenues and an even larger share of profits. A permanently damaged 737 MAX brand would significantly hurt Boeing’s profitability for many years.

Regardless of the 737 MAX crisis, more accounting charges at Boeing aren’t a matter of if, but a matter of when. High profitability on the 737 program in previous years almost kept those charges under the radar. In the future, not so much.