To say that he’s got his work cut out for him is an understatement.

I’ve put together a list below, which probably is only half of the important tasks at hand. Most of this list is obvious and doesn’t need any additional reporting because of all the coverage in 2019.

This column is focused on another task that should be, and in the view of many, must be done.

Boeing’s Board is preoccupied with the MAX crisis, but on the theory it can do more than one thing at a time, it need to also turn its attention to some introspection.

As I wrote Oct. 7, Boeing’s predicament over the MAX was a long-time in the making.

The Board of Directors is culpable because of policies established as far back as 1997, when Boeing and McDonnell Douglas merged. I wrote Dec. 23 that remaking the Board should be a priority. Today, I outline some specific ideas.

The annual meeting is in April.

Now is the time to start a house cleaning at the Board level that is so clearly needed.

It’s not just because of the MAX crisis, although this obviously is the catalyst.

The board is entrenched, filled with people who have been on it too long.

The board set the policy in which shareholder value trumped all other priorities at the company.

In fairness, this began with the 1997 McDonnell Douglas merger. Every board since then perpetuated this policy. This Board pledged that 100% of free cash flow would be returned to shareholders. Research and development funding was, in the view of some (including noted consultant Richard Aboulafia), starved from product development.

Because of the billions upon billions of dollars lost or deferred in the 787 and 747-8 programs, the belief was that shareholders needed to be rewarded for sticking in there. It was a laudable goal, but it was carried to extremes.

Only investigations will determine if there was a definitive link between prioritizing shareholder value at the expense of development—and safety—of the MAX. There certainly is anecdotal evidence supporting this theory.

Who the Board needs

The Board does not have a single person versed in aerospace engineering and safety.

Admirals Edmund Giambastiani and John Richardson are from the nuclear Navy. Certainly their experience in nuclear safety is nothing to sneeze at. But it’s not aerospace.

The aerospace safety committee created by the Board in August and announced a month later consists Larry Kellner, the former CEO of Continental Airlines, Giambastiani, Richardson and Lynn Good, CEO of an energy company.

These four may know how to navigate among safety regulations, but they aren’t aerospace engineers or aviation safety experts. (During Kellner’s five years as CEO, there were only one fatal accident at Continental. One involved a ground mechanic being sucked into an engine. One other accident involved a 737 skidding off the runway and catching fire. Nobody died.) 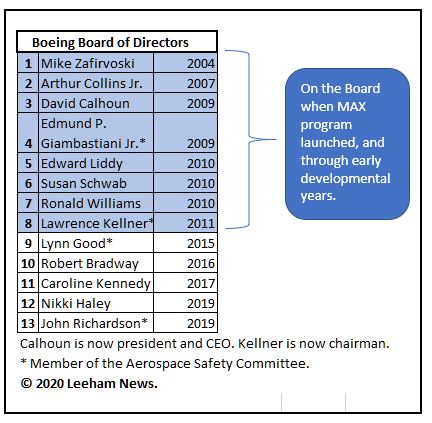 The tenure of these and other Board members speaks of entrenchment. They endorsed and perpetuated the policies and values that today have come under scrutiny because of the MAX accidents.

Boeing’s shareholder value priorities and returns masked internal problems that converged in the MAX but which were present in the 787, 747-8, KC-46A and on the space sides of the business.

The Board needs a major shake-up.

Calhoun and Kellner, now the CEO and chairman respectively, aren’t going to be tossed overboard nor are they likely to step down. Giambastiani, having chaired the Board probe into the MAX accidents, safety and culture, has valuable knowledge—now—of the problems.

The other old timers (ie, pre-2012), who were involved in the approval of MAX and setting shareholder value and cost-cutting policies that anecdotally may have contributed to the system that are targets of MAX accident investigations, should go.

It would be best if they decided not to seek reelection to the Board in April. Absent this, they should not be renominated. (Each Board member stands for reelection annually.) Stepping down is the honorable thing to do for the better good of the company.

Who should replace the five I suggest should step down?

This is a radical proposal, especially the two union reps.

Calhoun, who as a Board member since 2009 is part of the culture and priorities problem, has come under fire in many quarters (including this one, see here and here) for his insider status and ability to make necessary culture changes.

Like Nixon going to China, Calhoun has the opportunity to do the unexpected and radically change direction of Boeing. Adding the first three people to the Board brings aerospace and safety experience that is lacking.

Adding the two union reps brings direct hands-on experience and input to the Board that never existed.

The restructuring of engineering reporting recommended by Giambastiani following his committee’s internal probe is good but doesn’t go far enough. The engineers now have a direct reporting line to an officer who directly reports to the CEO. But the Board will depend on the CEO to bring them information.

A SPEEA rep—and one from IAM 751—would serve as a check on the CEO. They also can bring issues to the Board that aren’t covered through the new reporting line. This includes the production line worries discussed during Congressional hearings by an IAM whistleblower. (Even though the basic complaint went to Dennis Muilenburg, the CEO ousted last month, and to the Board, it is debatable whether the complaint got the serious attention 20/20 hindsight suggests it should have.)

Boeing remains in crisis. Even after the MAX is recertified and deliveries resume, the impact of the crisis will take years to resolve.

Radical steps need to be taken. And this includes at the Board of Directors. 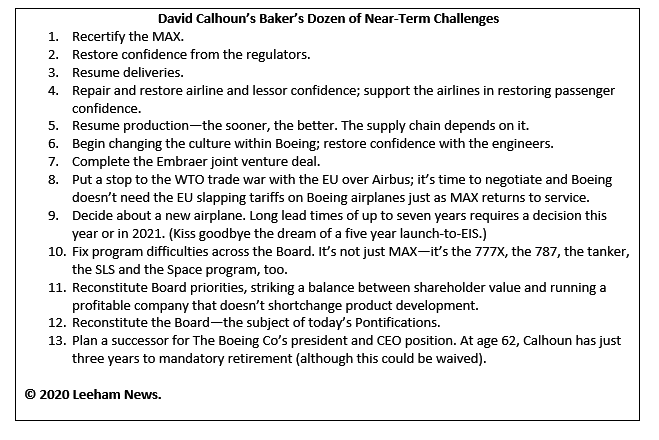