What the constant battery weight means for Electric and Electric-Hybrid

My first round of Corner’s about Electric airliners showed these aircraft have fundamental problems. Different from a battery-driven Electric airliner, you can make a Hybrid work. The question is, will it use less fuel than the aircraft it replaces and by it reduce our environmental CO2 load.

The first round of this analysis was made with back of the envelope calculations. No more sophistication was needed to see the problems. Now we go a step deeper by using our airliner performance model.

To test the Hybrid case for plausibility, we will do a simple experiment. We use our airliner performance model that can calculate an airliner’s mission fuel consumption within the odd percent of the true value.

We pick the most fuel-efficient small regional jet to do our check, the 88 seat Embraer E175-E2, Figure 1. It’s just started it’s certification flights and will be available in the market next year.

Figure 2 shows the two configurations of the E175-E2 we compare. The first variant uses the engines it was designed with, the modern Pratt & Whitney PW1700 GTF. 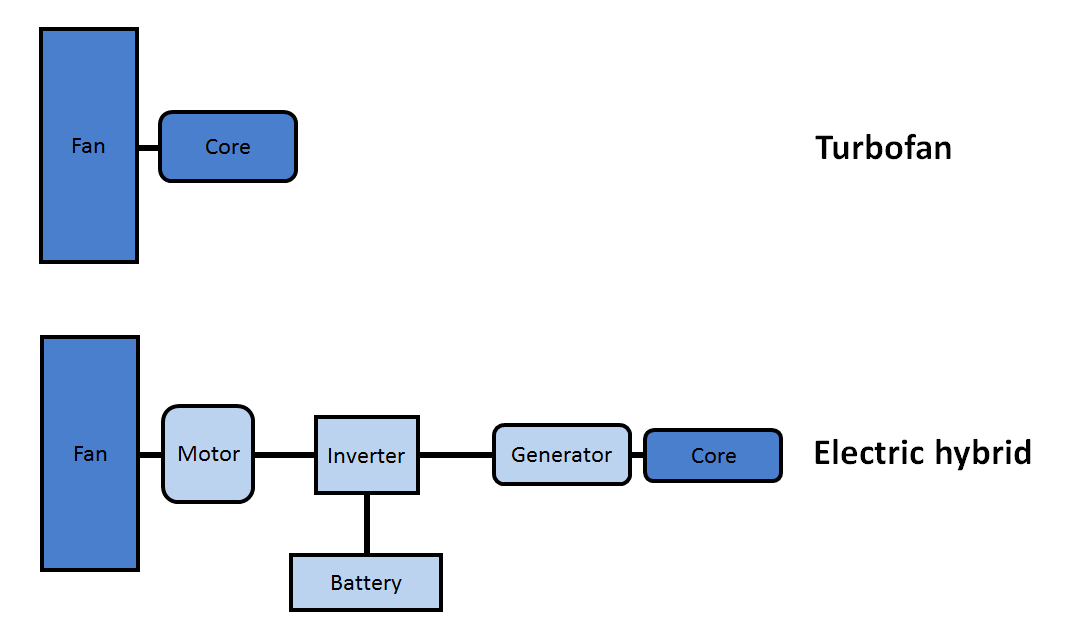 The second variant has hybrid engines with the same key characteristics as the PW1700 GTF (the battery is an energy source so it’s not included in the powerplant). The battery alleviates the takeoff fuel energy consumption from the gas turbine so we can make the gas turbine smaller and thus less energy-hungry. We assume we can fill the battery with less polluting electric energy from the grid before takeoff.

We further assume the Turbofan variant and the Hybrid have the same installed weight for the complete powerplant. I have before argued this is not the case, the complex hybrid installation plus gas turbine will be heavier than Turbofans. But we assume them equal for the experiment; we are running a best-case test for the Hybrid.

Instead of arguing the increased efficiency of the Hybrid upfront, we run the E175-E2s over a 300nm still air mission and look at the improvement in efficiency required for the Hybrid to consume the same fuel as the Turbofan version. We need equality before we discuss any improvement.

We assume our certifiable battery system (not cell, not battery alone) has an energy density of 0.15kWh/kg and a weight of 6,000kg. It gives us an energy store of 900kWh, the equivalent of 75kg of jet fuel.

For our hybrid, the takeoff weight is 47.7 tonnes as it flies the mission with a constant 6t higher fixed weight. Now the fuel consumption is 1290kg if we assume the same efficiencies for the two powerplants (everything else being equal) and that all battery energy is used during the flight.

We see we can store the equivalent of 75kg of fuel in the batteries, but these cause the equivalent of a 110kg increase in energy consumption for the flight. This is when we assume this 6t Battery system has no influence on the structure of the aircraft (which it has, MZFW and MLW have to increase which affects the structure) and that the Hybrid powerplant weighs the same as the Turbofans (which it doesn’t).

You can argue a higher efficiency hybrid powerplant reduces the amount of jet fuel that would be consumed but we are losing 9.3% in fuel efficiency due to the constant 6t higher weight caused by the batteries. A Hybrid aircraft has its work cut out to reach equality, let alone lower fuel consumption (increasing the precharged energy from the grid doesn’t help, if we do this the Hybrid efficiency gets worse).

The example has several simplifications. It’s a first-order check to see the challenges a hybrid airliner faces, this time narrowed down to the increase in fixed weight from the batteries. A detailed analysis would model a complete Hybrid airliner with its fixed weight and powerplant efficiency against the best Turbofan aircraft at the time of introduction.

The different checks in previous Corners show it will be difficult to make a hybrid-powered airliner that is more efficient than a turbofan-powered plane. The added weight of generators, distribution networks, inverters, motors, and battery kills the Hybrid. The most likely outcome is the first generation of Hybrids will consume more fuel than the aircraft they want to replace.

Re. battery driven airliners. I don’t need to make an example of such an aircraft. It doesn’t matter what fantasy figures I apply for battery energy density; it still produces non-viable airliners.

Different to battery-electric airliners, Hybrids are feasible. It’s just difficult to make them reach the fuel consumption of the aircraft they shall replace.

← Boeing down sharply second day in a row. Airbus stock in similar decline
Pontifications: What kind of aid could US airlines get? →

37 Comments on “Bjorn’s Corner: Why e in ePlane shall stand for environment, Part 13. Serial Hybrid.”