September 11, 2020, ©. Leeham News: In our series on Hydrogen as an energy store for airliners we look at whether we use an LH2 burning Turbofan as propulsion or as the EU study proposed, a Parallel Hybrid feed by a fuel cell, Figure 1. 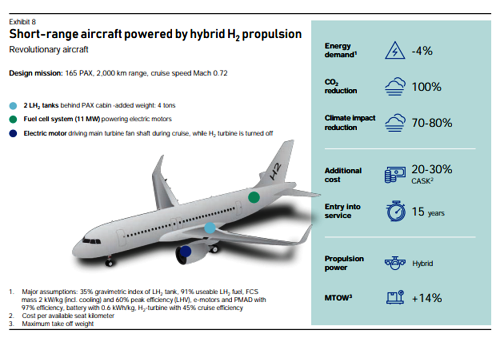 The EU study presented a Fuel cell parallel electric hybrid aircraft at 165 seats for introduction in 2035 as the alternative to today’s Airbus A320 and Boeing 737 aircraft. Let’s call this the LH2 Hybrid. Key data and assumptions are shown in Figure 1. Let’s examine these a bit closer.

The size and configuration is a modern variant of an A320/737. This is the size class we dissect in our series. The configuration of the propulsion should be the bottom alternative in Figure 2. 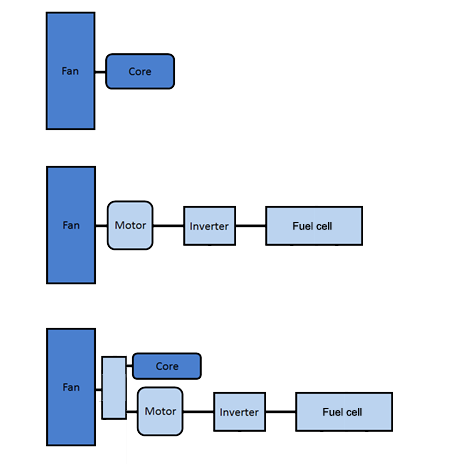 The study assumes the cruise power needed to propel the aircraft is 10MW, taken from an 11MW fuel cell, through the inverter, and driving a motor that drives the fan on each side (1MW disappears in chain losses). During takeoff and climb an LH2 gas turbine core is assisting.

The picture assumes 11MW fuel cell output is enough to propel the cruise for the aircraft at 0.72M cruise speed. After losses through the Inverter, the Distribution network, and Motor we are at 10MW fan power for the LH2 Hybrid case.

Takeoff power to the fans for today’s A320 is 40MW, with cruise power of 14MW at the average weight on the average sector. Cruise speed is then 0.76M.

Let’s first calculate the weight of the components for the LH2 Hybrid and then discuss how realistic this configuration is for a 2035 realization.

The fuel cell weighs 5.5t with the assumption of 2kW/kg. The inverters weigh 0.6t and the motors 0.9t (kg/MW values from the Electric Corner series).

To understand the weight of the parallel helper core we need to assume an additional power need on top of 10MW. With today’s A320neo it would be 30MW.

The EU LH2 Hybrid assumes to be more efficient than today’s A320neo, so it should need less takeoff power. It’s easy to think it should be (let’s disregard the battery in the concept, in order to give the LH2 Hybrid it’s best shot. We know by now batteries kill any configuration).

But we know the empty weight and wetted are of any LH2 aircraft will increase because of the tanks as a carbon fueled aircraft gets the tanks for free (in the wingboxes) and the isolated LH2 tanks weighs a lot and take considerable space in the fuselage. So before we look at the LH2 Hybrid propulsion system we have a heavier aircraft with a larger wetted area.

The fuel weight fraction will be lower (LH2 has three times the energy per kg of Jet-A1) but on the short-range flights we look at it can’t fully compensate. We fly a larger and on average heavier aircraft on the sector we fly. This is consistent with the conclusions of the Airbus Cryoplane study (we talk of around 10% higher drag = energy consumption for an LH2 aircraft compared to carbon fueled variant according to the Cryoplane study, everything else being equal).

The fix for this is a wing with a higher aspect ratio, to reduce the wetted area of the wing and offer a higher effective span, by it, reducing induced drag. But we are span limited to 36m, otherwise, the aircraft doesn’t fit the airports. In reality, we are lucky if we can improve the power need from today’s A320neo.

Let’s give the LH2 Hybrid its best shot

To not be to negative, let’s assume we can by some magical means keep takeoff power at 30MW and cruise power to the fans at 10MW, a 25% or more improvement from today.

As we can see it’s break-neck developments for a Hybrid power that 2035 is not more efficient than today’s PW1100/LEAP cores. And this assumes we can develop all the components for the Hybrid at the assumed weights and efficiencies. We are today at 1MW motors/inverters and aircraft fuel cells of below 1MW.

In the next Corner, we examine LH2 fueled Turbofans as alternative propulsion.