How to store hydrogen efficiently on airliners?

We will discuss the tank design for liquid hydrogen (LH2) in this Corner. It’s the area that forces a major change compared to the airliners as we make them today, and the subject has enough variables that we focus the aircraft fuel system in the next Corners.

Hydrogen is the most common chemical substance in the universe. It melts from solid material to liquid at 14K (-259°C) and boils to gas at 20K (-253°C). It means, unless we want to store it under extreme pressure (which is not weight efficient for an aircraft), we need to store the LH2 between 14K and 20K in our tanks.

As discussed, this is too volume inefficient for airliners and we, therefore, store hydrogen in its liquid phase as LH2. This means we need to figure out how we keep hydrogen below 20K in the tanks. You do it by insulating the tanks extremely well.

The common designs are an inner liner that can sustain the characteristics of LH2 (among others no permeable leakage and no embrittlement), followed by an insulation layer to keep the fluid at the below 20K it has when filled from the fueling truck.

This is not possible for all parts of the tank over a longer period. At parts where the temperature exceeds 20K, hydrogen will boil off and there will be a top layer in the tank of hydrogen gas, Figure 2. 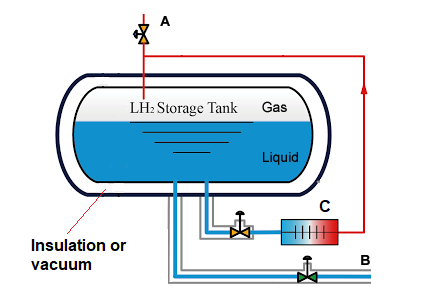 A certain loss of hydrogen is accepted, the boil-off factor, which is less than a percent per day for well-insulated tanks. The boil-off gas also replaces any LH2 that has been consumed from the tank through B.

The gas is not allowed to build high pressure in the tank, above a fraction of a bar a pressure relief valve will vent the hydrogen to the surroundings or to for instance a hydrogen fuel cell system that replaces the APU in the aircraft (A in Figure 2).

To keep the fuel cell feed when the boil-off is not sufficient, a path from the liquid side with a liquid-to-gas heat exchanger is included at C.

The inner tank (the liner) is typically aluminum, with a foam style insulation or a vacuum chamber on the outside. Designs that use a vacuum layer have an insulation layer on top. The vacuum functions according to the Dewar or thermos principle to reduce heat transfer to the LH2 area. The additional insulation is a safety measure in case the vacuum is lost. Without the insulation layer, the boil-off in the tank would be strong, creating a potentially dangerous outflow of gas.

As hydrogen gas is a non-toxic gas it can be vented to the atmosphere for any excess or leaked gas. Schemes where the boil-off gas is re-liquified by cooling, such as the storage tanks for missile launcher sites, are appearing for stationary longer-term storage, Figure 2.

(We use the word Cryogenic a lot in this series, it also appears in Figure 2. Here its meaning from Wikipedia: In physics, cryogenics is the production and behavior of materials at very low temperatures.) 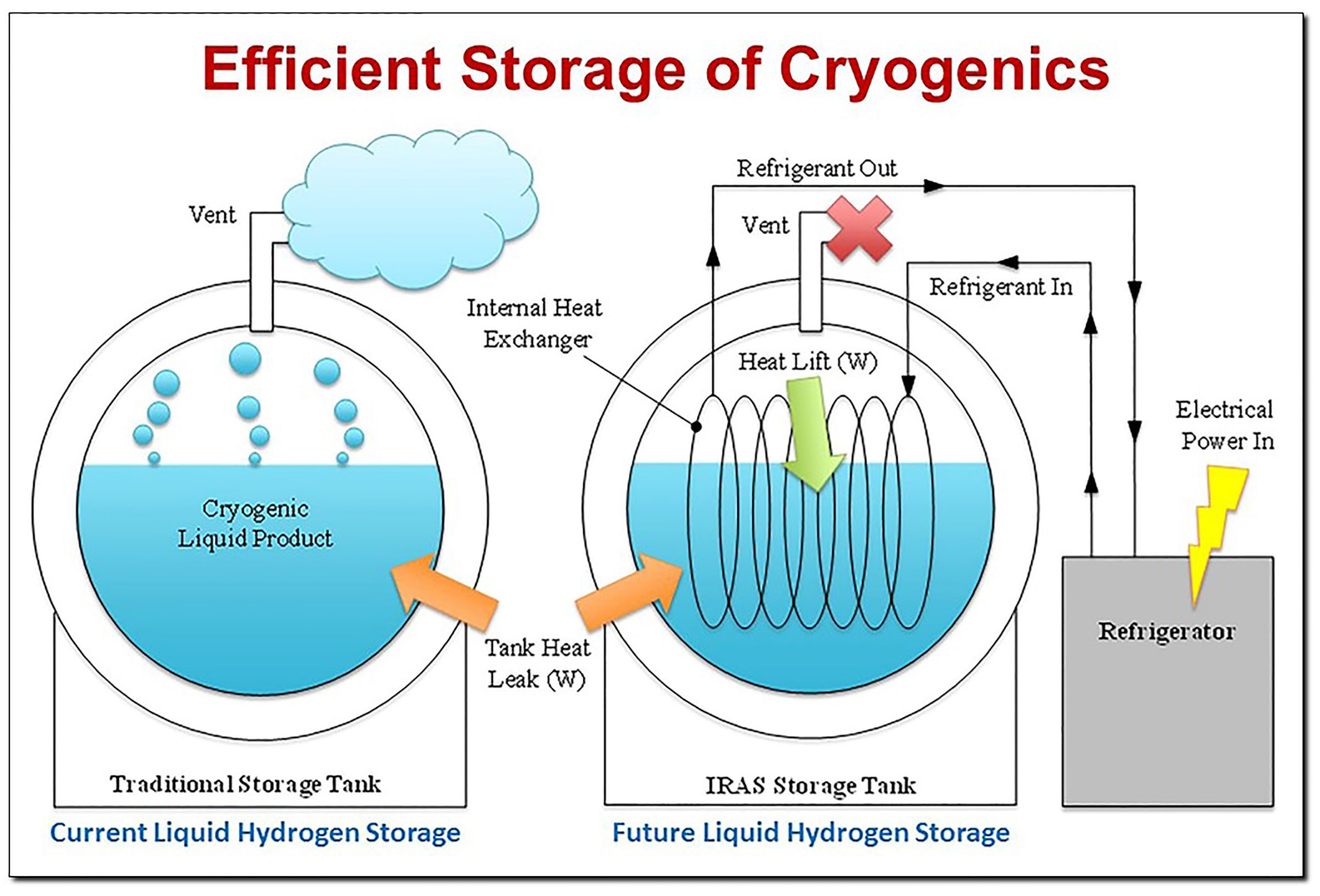 It has not found its way to airborne tanks yet, the system complexity and weight doesn’t pay off for missions of up to 15 hours.

There are several reasons why efficient tanks have spherical or cylindrical or near-spherical/cylindrical shape:

The insulation of the tank is designed to give the desired heat transfer for the storage of a day or so. For longer parking of the aircraft, the LH2 is returned to the airport tanks via the tanking trucks.

In the next Corner, we look at tank placement and compromises in tank shape.

← Sunset of the Quads, Part 3
IAM warns members: Boeing is coming for concessions on 787 consolidation study →

35 Comments on “Bjorn’s Corner: The challenges of Hydrogen. Part 5. The Hydrogen tank.”