Oct. 14, 2020, © Leeham News: Covid-19 has made airlines, aerospace companies and suppliers really, really sick. IATA now says it could be 2024 before worldwide travel numbers get back to something near pre-Covid levels.

To get more paying flyers back in the air sooner, the industry is looking for ways to make passengers feel more assured that they won’t get infected while in the air. It’s leading to some innovative solutions and what some industry insiders say is the setting of long-overdue standards for in-flight cleanliness. 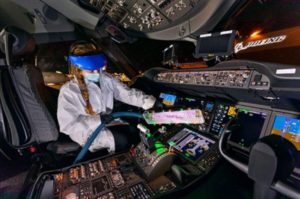 Boeing developed a system using UV-C radiation to sterilize cabin surfaces. One of Boeing’s best-known suppliers, Teague, designed new gaspers to inhibit the spread of airborne virus particles. And several other suppliers are pushing forward with products that inhibit the growth – and potentially kill – viruses and other microorganisms on high-touch cabin surfaces.

Aerospace suppliers say there’s not one silver bullet that’s going to prevent the spread of Covid-19 on jets.

“It’s the sum of all the parts,” he said in an interview for the current edition of Northwest Aerospace News magazine. “The HEPA filters, the airflow exchange. And now we’ve added this, this and this.”

IATA hosted a conference on the subject of Covid cleanliness last week. Airbus, Boeing and Embraer were among the presenters, and some of the key takeaways were:

Given the emphasis on preventing airborne spread of the virus, an early proposal from Teague, the Seattle-based design company, seems to be more important than ever. 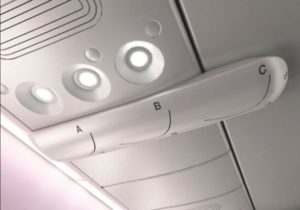 Teague in March released plans for what it calls the Air Shield. It’s an attachment that replaces the valve on standard gaspers to provide a sharp blade of air that surrounds each passenger in their seat.

The air moves fast enough to greatly inhibit the spread of any virus particles that may be exhaled by a passenger, pushing them down to the floor where they’re sucked into a jet’s existing air circulation system, where 99.9% of them are scrubbed out by hospital-grade HEPA filters within two or three minutes.

Teague has done computer modeling on the way the air flows inside a cabin, and set up simulated A320 and 737 interiors for simulator tests that confirmed what the computer models predicted.

One of the biggest benefits to airlines, said Anthony Harcup, Teague’s senior director for airline experience, is that the product is cheap and simple to install.

“A decent, Tier-1 airline using their own ground staff could do three or four (planes) overnight,” he said. “Airlines are really on their knees. They need to have something that they can fit quickly and buy in volume.”

Back in April, President Trump infamously proposed injecting bleach into humans to fight coronavirus (a treatment his doctors seem not to have thought of when he himself became infected). He was mocked for that, as well as for saying that light could kill the virus.

But he wasn’t entirely wrong. UV-C radiation does in fact kill viruses and other microorganisms, and it’s been used for decades to sterilize medical equipment. However, its effects on human tissue – rapid and severe sunburn, damage to corneas and skin cancer with repeated exposure – make it impractical for use on humans. 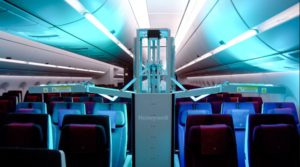 Several proposals have been developed to safely utilize UV radiation on aircraft, however.

Honeywell, for example, has developed a UV-C unit the size of a beverage cart, with arms that extend over seats. It claims it can disinfect a cabin in as little as 10 minutes. Qatar Airways is the first airline to use it.

Boeing in September licensed a UV-C emitting wand it had developed to Florida-based Healthe Inc., which will manufacture the units. Boeing says ground crews can use them to disinfect high-touch cabin surfaces and said that it takes about 15 minutes to completely sterilize a flight deck.

And Waypoint Aeronautical in Everett has developed a UV lighting system that integrates into the Passenger Service Unit. The UV lights would be installed in the reading lights. Since they’re limited to a light spectrum (405 nanometers) just outside the UV spectrum, they would not be harmful to humans,  CEO Robert Olson said.

At this level, an airline can keep the system running and disinfecting surfaces while passengers are on board, or put it on a timer to turn and off automatically. Waypoint was developing the system to combat flu infections – following procedures used to battled the H1N1 virus back in 2009 — when Covid-19 hit

There are some real benefits to sterilizing with UV-C, compared to disinfecting with sprays and wipes, said Molly Bridger, the vice president of marketing for Simona Boltaron.

Plastic surfaces can have textures, grooves or scratches where microbes can hide from a disinfectant, she explained. UV-C light, on the other hand, can get into those hard-to-reach areas.

The problem, for airlines, is that UV-C radiation is harsh and that most plastics will fade or otherwise degrade when exposed to it repeatedly. Bridger’s company, which makes sidewalls, side panels and lavatory components, produces a proprietary color-fast plastic that won’t fade under UV-C disinfecting and will also stand up to chemical cleansers.

Part of the solution

A study released last week by Harvard University determined that contaminated surfaces contributed less than 10% of the total infection risk for fliers.

But disinfecting surfaces still should be part of a multi-faceted approach to cabin hygiene including masks, hand-washing, advanced air filters and screening for people showing Covid symptoms, the researchers said.

Several companies are working on materials for high-touch surfaces that naturally resist microbes.

“You’re not eliminating cleaning,” said Ben Smalley, the aviation business manager at Sekisui Kydex. “You still need to clean. But what you’re doing is keeping it clean between cleanings.”

Smalley’s company is the U.S. subsidiary of a Japanese industrial giant. It provides anti-microbial sheets to higher-tier suppliers that thermoform them into finished pieces.

Another company, Nycote, has a nylon-based polymer resin that has been used for decades to stop the growth of microbes inside fuel tanks. Now it’s looking for partners to put the resin on high-touch cabin fixtures, said Andrew Larsen, Nycote’s officer for business development, technical sales and communications. “Seat backs, table trays, arm rests, call lights –anything that we can coat.”

And Tapis markets fabric embedded with strands of a silver ion that’s proven to inhibit the growth of bacteria and viruses other than Covid-19. The company – like most of the other suppliers — is waiting on results of testing against the coronavirus.

What does clean really mean?

The silver lining in all these dark clouds could be that the industry is coming together for what Smalley called a long-overdue discussion on aircraft cabin hygiene.

The Red Cabin group, which specializes in industry meetings for the aerospace and automotive industries, has formed a cabin hygiene working group that is holding virtual meetings on a regular basis to address pandemic-related issues.

One of the first steps, Smalley said, is setting standards for what actually constitutes adequate disinfection.

In an industry dominated by regulatory standards, “nobody has a definition of ‘clean,’” he said. “There really isn’t a standard for clean out there in the industry. People have different procedures, but there isn’t a standard that we’re all striving for.”

That will change as a result of the Covid crisis, Smalley predicted. “That neglect toward aircraft cleanliness in the past is going to be top-of-mind for the industry as a whole. It’s going to be a key part of the passenger experience in the future.”

Preparing for the next pandemic

In its October edition, Northwest Aerospace News reported that several suppliers had found ready buyers for their clean-cabin products.

But given the financial constraints that the airlines face – particularly in the United States, where it seems that no additional coronavirus relief is coming until after the Nov. 3 elections – most buyers are being very selective about their spending, the companies said.

Their message is “we don’t need a knee-jerk fix,” said Nicholls, at Tapis. “’We don’t want to spend a million bucks and have it be obsolete in 12 months; we’d rather spend two million and have it last for 10 years.”

Bjorn Fehrm and Scott Hamilton contributed to this report.

← Lessors to Take Growing Share of Fleeting the Future
Enhancing the Dreamliner, Part 2: The 787-8 analyzed →

39 Comments on “Covid in cabins: Low risk, no silver bullet”