November 13, 2020, ©. Leeham News: In our series on hydrogen as an energy store for airliners, we now look at the cost of hydrogen.

The current cost-efficient production is predominantly by reforming natural gas, meaning it’s a process that involves carbons. Hydrogen as an energy transporter then makes no sense as the point is to de-carbonize our energy supply. 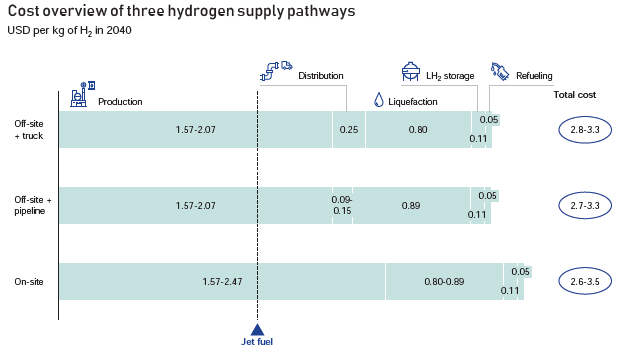 When we talk about hydrogen production and its cost, we must separate the short-term and long-term goals.

Short term, we can accept that hydrogen comes from carbon fuels to build-up the eco-system. The whole system needs bootstrapping with adequate access to reasonably priced hydrogen.

The longer-term hydrogen production chain must transfer to non-carbon sources (or natural gas with carbon capture). Such investments are happening. The latest two weeks ago, when the Norwegian company Nel signed up to deliver 40-50MW of green hydrogen, produced through electrolysis from hydropower, to steel production in Norway. The present carbon-based energy for the steel plant emits 100,000 tonnes CO2 per year. The switch to green hydrogen energy will reduce this by 60%.

The most recent study on hydrogen production cost is the EU study; Hydrogen-powered aviation. Hydrogen produced in the quantities required for a green conversion of the transport industry, including aviation, would cost around $3 per kg by 2040, Figure 1.

The equivalent energy cost for Jet-A1 would be around $2 if the prices stay flat from today. Alternatives like synfuels would cost more than $4.

Figure 2 shows the long term evolution of fuel prices as projected by the EU study. Observe it’s per MWh, thus per unit of energy. 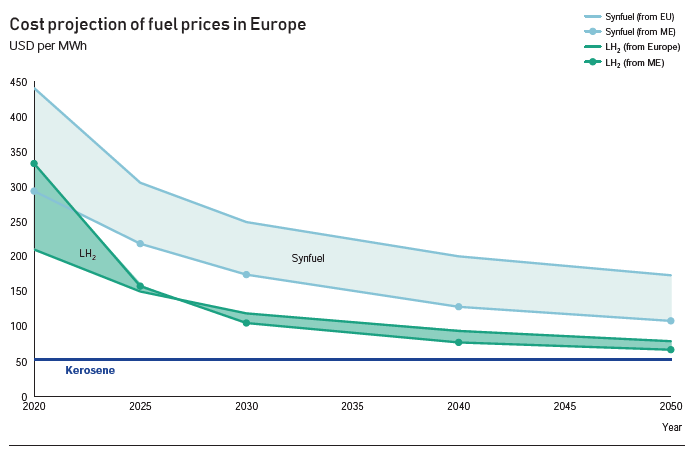 The projection builds on the continuation of today’s low fossil fuel prices. It’s then quite an achievement that sustainable energy production can come within 30-50% of the production costs of something that relies on Sun energy capture in nature over the last million years, now pumped up and burned off in a non-sustainable process.

The different production methods for green hydrogen needs development and built to scale to get to the above figures. But the change has started. The Nel electrolysis process referenced above will be more efficient than today’s processes. And it uses renewable hydropower as the energy source.