Future of 737-10 MAX clouded by Calhoun: What it means

CEO David Calhoun said Boeing might cancel the 737-10 MAX program if the FAA doesn’t certify it by year-end or Congress doesn’t grant an extension of a mandated deadline. Photo Credit: Leeham News.

July 17, 2022, © Leeham News: Boeing CEO David Calhoun cast doubt over the future of the 737-10 MAX in a July 7 interview with Aviation Week magazine.

With questions about whether the Federal Aviation Administration will certify the MAX 10 by year-end, doubts about the program’s future had been whispered in the market for weeks. A Congressional mandate adopted in the wake of the MAX crisis established the Dec. 31 deadline for the MAX 10. Boeing already has talked with customers about swapping MAX 10 orders for the 737-9 MAX, according to market sources.

The 737-7 MAX also remains uncertified even though flight tests have been completed.

Calhoun told Aviation Week explicitly that canceling the MAX 10 was an option Boeing will consider if certification isn’t done by year-end and if Congress doesn’t grant an exemption. (Today’s Democratic-controlled Congress is unlikely to do so. If Republicans take Congress following the November mid-term elections, an exemption becomes more likely.)

“The intent of that legislation was never to stop the derivative product line with respect to the MAX,” Calhoun said on the first-quarter earnings call. “So, I believe our chances are good with respect to getting legislative relief. It doesn’t mean we’ll get them and if we don’t it’s a problem.”

“The [737-10] is a little bit of an all-or-nothing,” Calhoun told Aviation Week editors in an interview at the company’s new headquarters in Arlington, Virginia. “I think our case is persuasive enough. . . . This is a risk I’m willing to take. If I lose the fight, I lose the fight.”

Calhoun’s interview and timing with Aviation Week is a tradition with Boeing and Airbus in advance of the Farnborough and Paris Air Shows. (Calhoun’s full interview, including other topics, is here. The interview with Airbus CEO Guillaume Faury is here.) But there is an element of awkward timing in Calhoun’s remarks casting doubt over the future of the MAX 10. Delta Air Lines, which Boeing has been chasing since the MAX 10 was launched in 2017, is expected to announce a big order for 100 airplanes this week at the air show.

Delta’s first order for the Airbus neo or Boeing MAX ultimately went to Airbus for the A321neo. But the bake-off actually slightly favored Boeing and the MAX 10. However, part of the airline’s demand is that Delta Tech Ops be licensed to perform engine maintenance, repair, and overhaul not only for Delta but also be free to contract with other airlines. CFM refused. Pratt & Whitney, which already sold the Geared Turbofan to Delta on the Airbus A220 and granted a license, agreed. This tipped the order to Airbus. (Scott Hamilton’s book, Air Wars: The Global Combat Between Airbus and Boeing, details this.

Delta also wanted to place an order for the MAX 10 earlier this year. But Boeing didn’t give the pricing or the delivery slots to Delta (or to Westjet, which concurrently was seeking an order). Instead, Qatar Airways and Boeing announced a memorandum of understanding for the MAX 10. This MOU has since expired. It’s unknown if these delivery positions remain reserved for Qatar.

Calhoun’s comments will undoubtedly generate questions about the future of the MAX 10 at any press event announcing the Delta order, which will take the blush off finally winning Delta—the only major US carrier without any MAX orders.

What if the MAX 10 is canceled?

If Delta announces the order, Boeing will have around 800 sales for the airplane. Canceling means swapping the MAX 9 and perhaps the MAX 8 for the MAX 10. Many of the outstanding orders were originally for the two smaller variants. 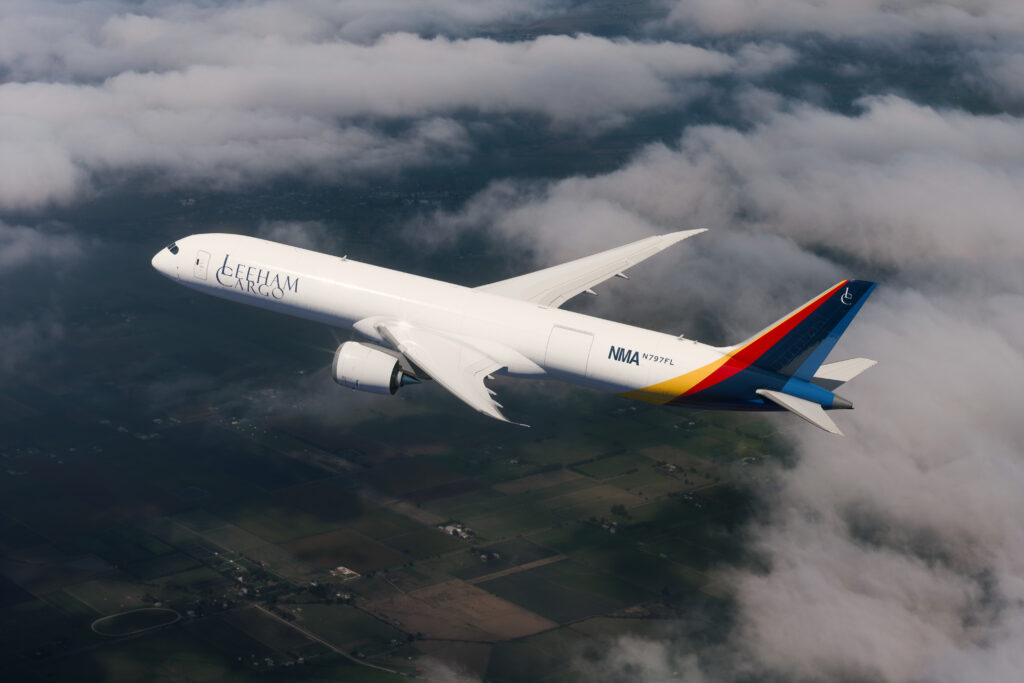 A freighter version of the New Midmarket Airplane may be a key reason Boeing returns to the idea of a twin-aisle design for the Next Boeing Airplane (NBA). Photo Credit: Leeham News.

Canceling the MAX 10—a prospect LNA thinks is unlikely, but not out of the question—increases the likelihood that Boeing could launch a new airplane program sooner than later. LNA also believes this tips the scales back toward a twin-aisle New Midmarket Airplane. There are many reasons, but one includes the prospect of an NMA Freighter to replace the Boeing 767-300ERF.

Boeing faces a requirement to terminate production of the 767F after 2027 due to ICAO noise and emission standards. The FAA proposes adopting these standards, effective at the end of 2027. The 767F doesn’t meet the standards. Calhoun said Boeing seeks an exemption. A Democratic presidential administration might grant an exemption to bridge to a new technology airplane. A Republican administration likely would grant an indefinite exemption. But the presidential election isn’t until 2024. Boeing should decide whether to launch the NMA next year or in 2024.

Airbus CEO Faury told Aviation Week it makes no sense for Boeing to launch a new single-aisle competitor to the A321neo with improvements to today’s engines when the CFM RISE Open Fan may be available for service in 2035. In this, he’s not wrong. But Airbus is focused on the single-aisle and is not looking at the bigger picture.

No announcement at Farnborough this year

LNA doesn’t expect any program announcement from Boeing (or from Airbus) at this year’s Farnborough. We have long maintained that 2023 or 2024 will be the year Boeing proceeds. The MAX and 787 inventories should be well on their way toward full deliveries. Cash flow will be restored. Some of the debt will be paid down. Boeing’s balance sheet and stock price should recover enough to pursue an equity offering if leaders choose.

Boeing should be positioned no later than 2024 to at long last launch a new airplane.