Boeing is gearing up for the transition from the 737 Next Generation to the 737 MAX at its Renton plant in Washington State.

During pre-Paris Air Show briefings at Boeing last month, embargoed until today, Boeing officials detailed how they will transition the production facility in a continuous flow. When Boeing introduced the 737NG, sales of the 737 Classic were terminated. Boeing expects a two year transition period this time, meaning the NG will continue production 2019, two years after the 737-8 MAX first enters service.

The exception will be the P-8A assembly line, which is based on the 737NG and which is in the so-called “saw tooth” building to the west of the primary 737 assembly plant. The saw tooth building is seen at the far right of this Boeing illustration. 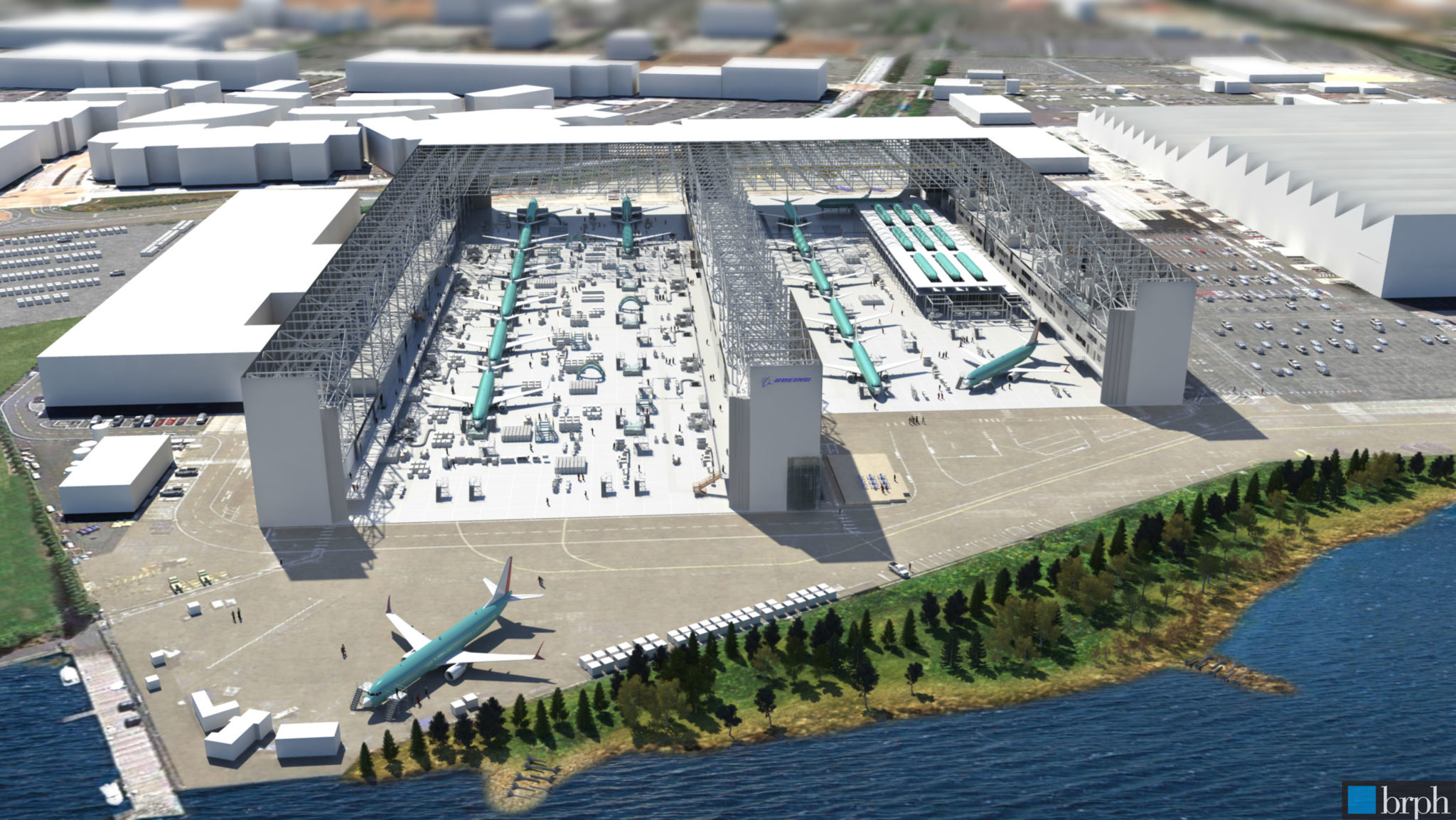 The primary plant above shows the current NG assembly lines to the left and right. The line on the left produces 21 737s a month and the one on the right will be at this rate next year. The line in the center will initially be the MAX transition line, where the test aircraft will be assembled and the workforce learns the differences between assembling the NG and the MAX, which will have substantial differences compared with the NG.

Eventually, the MAX will fully integrate on the two NG lines.

At previous air show briefings, Beverly Wyse VP and GM of 737 Program, said the center line will have the capacity to match the assembly rates of the other two lines, or 21 per month, giving Renton the capacity to produce 63 737s a month.

At last month’s briefing, Wyse displayed this chart that suggests production rates will maintain at 42/mo from implementation next year. 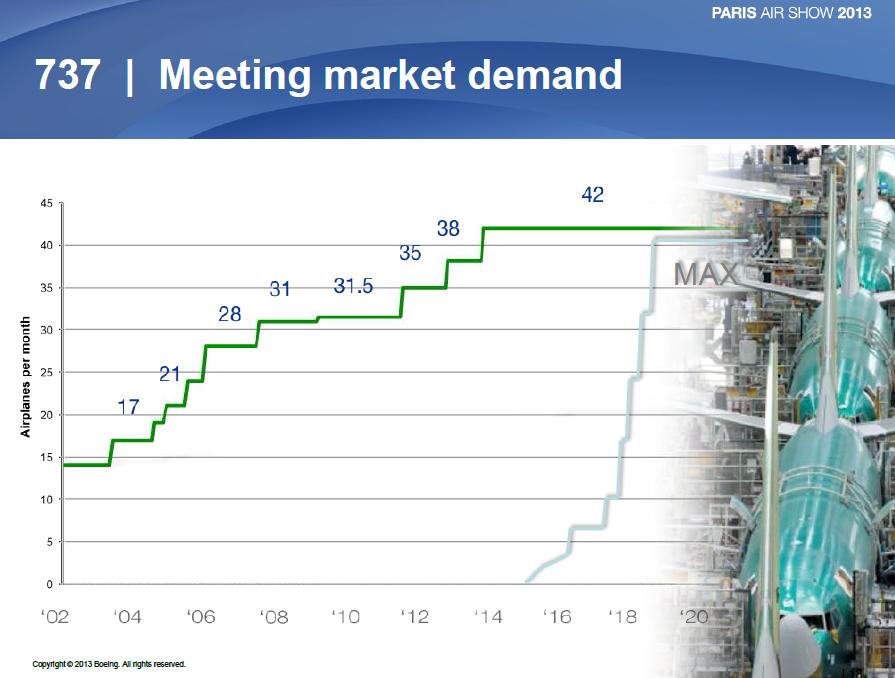 However, we know from our own market intelligence that Boeing is considering sharply higher rates by the end of the decade.

Wyse, in the recent briefing, said the workforce is a key advantage for Boeing with flow-through benefits for Boeing’s customers.

“One of our key strengths at this site has been our employees…both in design and in production. It gives our customers a significant advantage and one of those advantages it brings our customers is flexibility. It has served our low-cost customers very well.”

Wyse said the 737’s lighter weight compared with the A320 is another advantage. 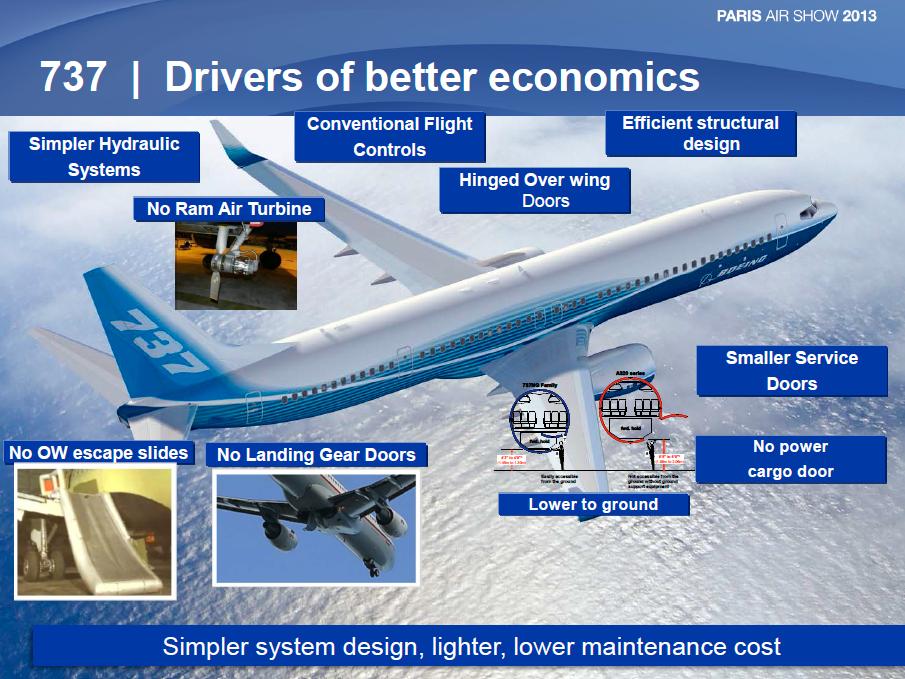 “The structural efficiency of the aircraft is not really visible, such as advance alloys, that contribute to lighter weight. We don’t have landing gear doors on the plane. That contributes to hundreds of pounds of weight advantage. The light weight, inner-opening cargo door contributes about 800 pounds of weight advantage. The lack of overwing escape slides. The fact that it’s lower to the ground. And yes, even that slightly narrower fuselage actually translates into an advantage for our customers.”

[We’re not sure we’d brag about not having evacuation slides, but maybe that’s just us.]

Wyse zeroed in on the lighter weights of the 737s vs the A320 family with this slide. 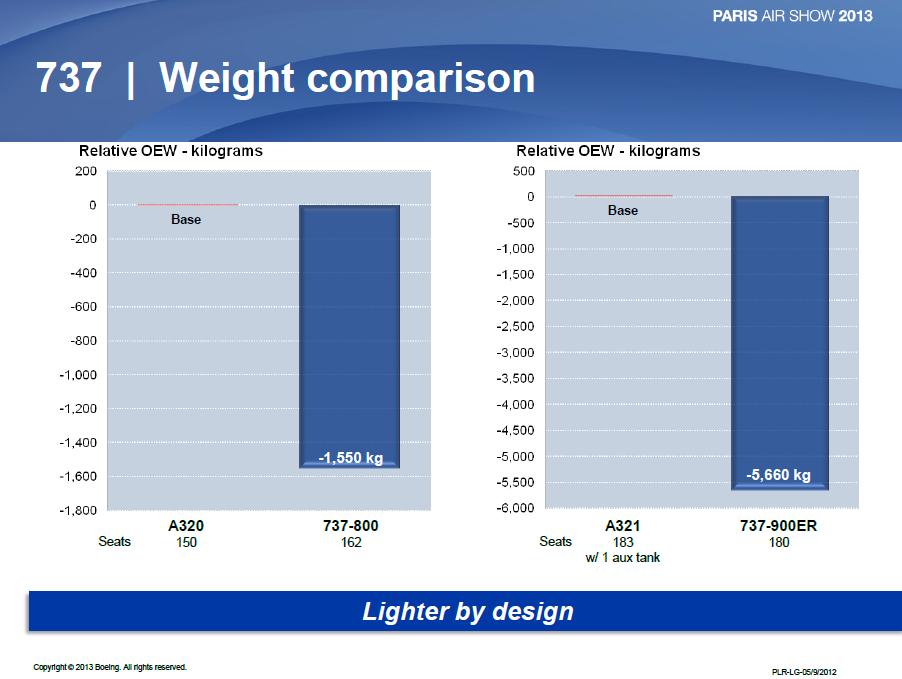 We noted that Boeing included one auxiliary fuel tank for the A321 but not for the 737-900ER and subsequently questioned the rationale for this because this would appear to be unfairly adding weight to the A321 for purposes of this illustration.

A spokesman provided this information:

Rather than comparing airplanes with the same number of fuel tanks, we compare those with the closest range to get that figure.  But in full disclosure, even with an extra fuel tank and 415 nautical miles greater range, the Boeing airplane is lighter.

Here are the numbers behind the chart:

The addition of 160 kg to both the A320 and A321 OEWs for “Production Winglet in lieu of Wing-Tip Fence” results in the two delta weights shown on the charts.  Adding that results in the following:

Although we probably could quibble with some of the methodology described, we at least now understand how Boeing came to include one aux tank for the A321 and none for the 737-900ER.

“Huge to our customers is the increased revenue they can get from the 12 seats. It results in nearly half a million passengers being carried over the 20 years,” Wyse says.

← Comparing the 737 and the A320: the story continues
Airbus v Boeing on wide bodies →