Airbus comes up for air, responds to Boeing’s Form 41 reliance

Airbus came up for air from the Paris Air Show and provided this response on the DOT Form 41 debate. Readers can now compare closely Boeing’s response to our queries with the Airbus response and draw their own conclusions. As with Boeing, we print their verbatim replies to our questions.

Boeing uses F41 data of the period 2004 to 2011 to demonstrate lower maintenance cost of the 737NG compared to the A320. Without debating about the relevancy of F41 data for aircraft maintenance performance and the “correctness” of the data, let’s have a look at the reported F41 data from the point in time when the A320 entered the US market (1991). 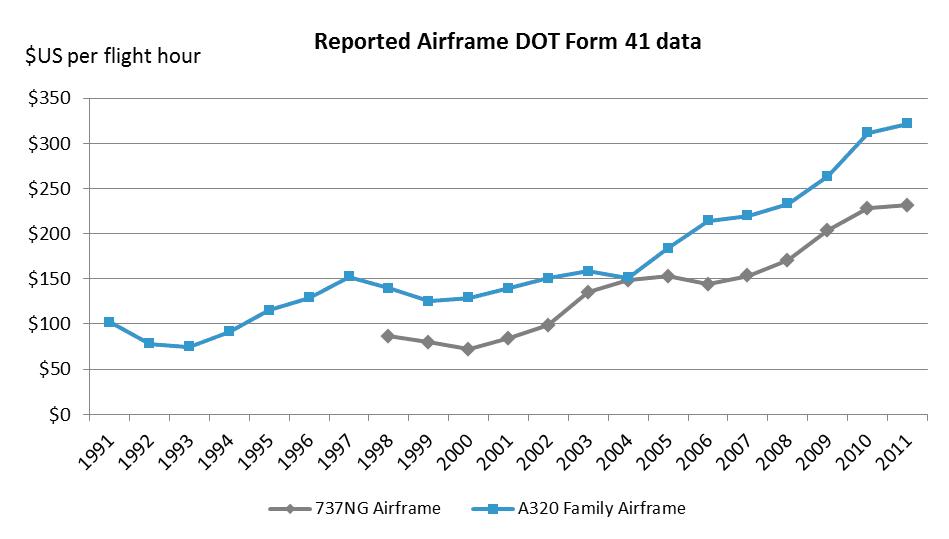 We see why Boeing is focusing on the 2004 to 2011 period, the reported data are at the first glance favourable for the 737NG.

However, the NG entered in the market in 1998, seven year later than the A320, hence at any point in time the graph compares aircraft with at least a seven year age difference. Is this a “like for like” comparison?

The picture does now look quite different, but money over time does not have the same value and this is in the above graph penalising the NG. 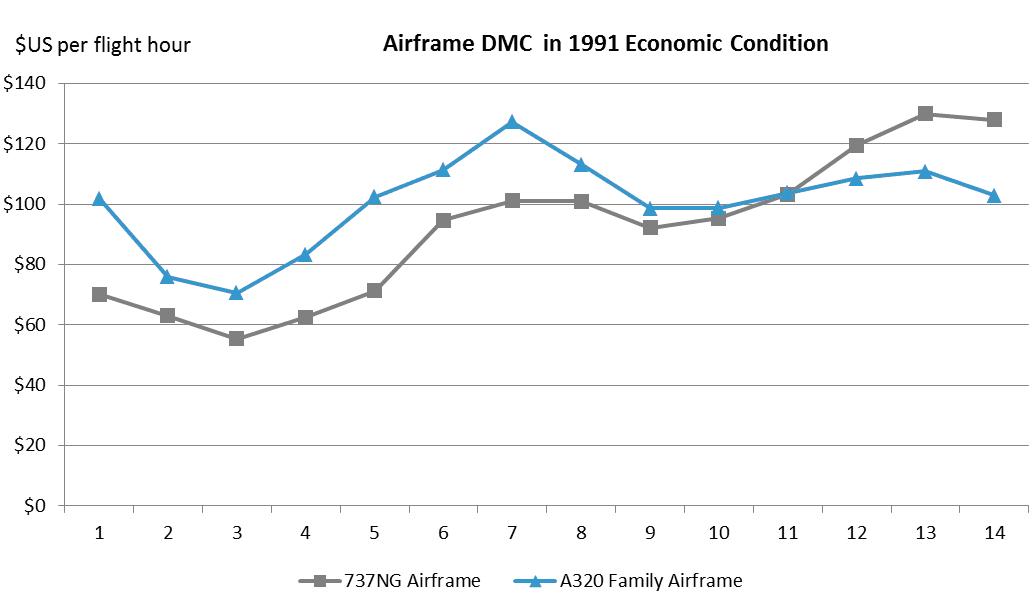 At the time A320 entered the US market barely any MRO capacity was in place. This has changed over the years and from a certain point in time MROs started to make money with performing maintenance work on the A320. Competition started to take place between the MRO’s, which impacted the pricing of maintenance work in reducing the money spent for the operators. For the NG the maintenance market condition has not been the same. Due to the derivative nature of the NG to the 737 Classic a wide MRO base has been proposing maintenance work on the NG right form the entry into service in 1998.

The graph below illustrates this effect in showing the evolution of independent MROs in the US market. 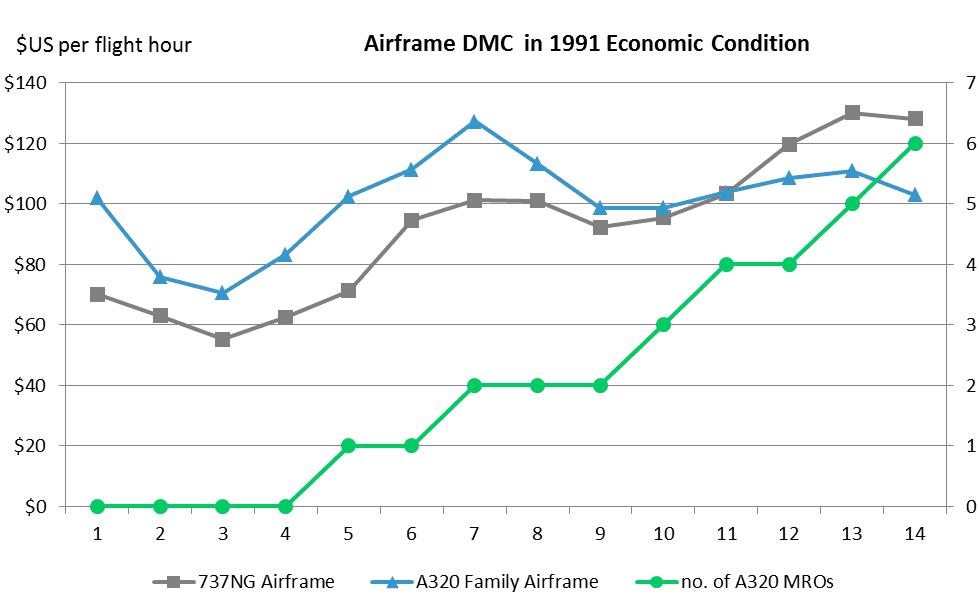 Another fact leads to lower maintenance cost for the A320 compared to the NG. It is the solid structure, which has been fully fatigue tested during the certification of the aircraft. An advantage the NG does not have, because again due to the derivative nature of the NG compared to the Classic, no full fatigue test has been performed and certification of the airframe has been obtain by “grandfather rights”.

Some quotes from leading MRO’s illustrate the well maturing structure of the A320: 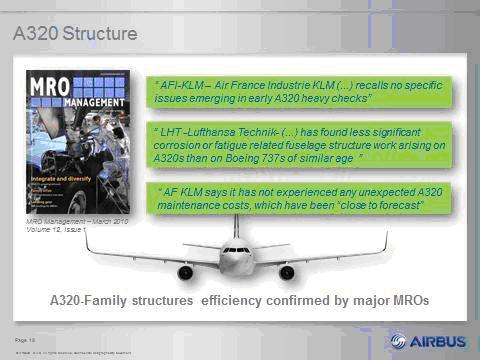 ·         Instead of focusing on the “sweat spot” for the NG, data of the entire reporting period must be compared

·         Comparing different fleet ages is not leading the sensible results

·         Market forces e.g. competition have an impact on maintenance cost 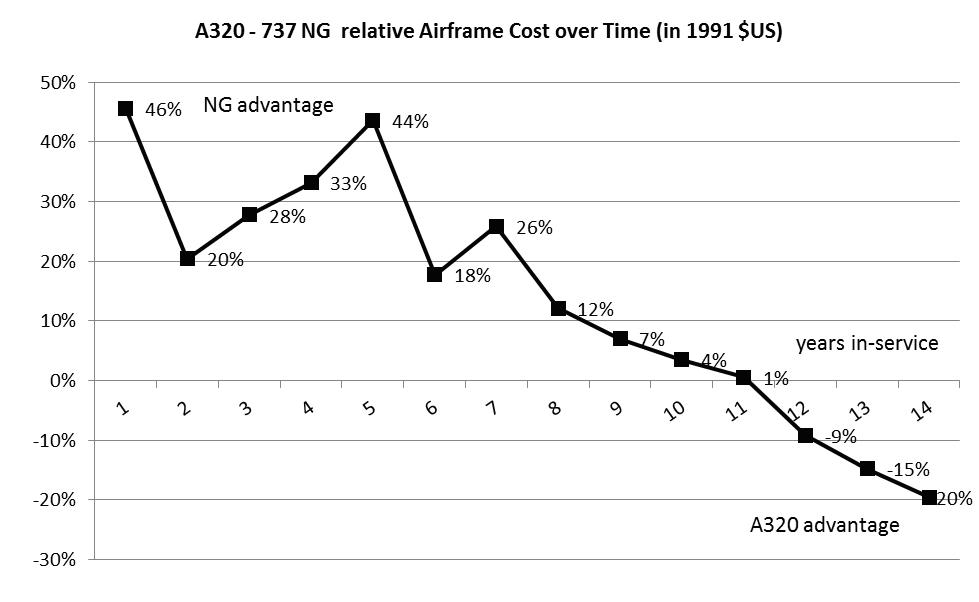 The A320 airframe is better maturing than the NG and improvements on the A320 are showing tangible results.

← Paris Air Show wrap; and other Odds and Ends
We’re off to Svalbard (we know: ‘where’s that?’) →

71 Comments on “Airbus comes up for air, responds to Boeing’s Form 41 reliance”