Lessons learned by Airbus on its A380 production and development by arch-rival Boeing of the troubled 787 appear to be paying off with the A350 XWB.

There are now two A350s operational in the flight test program as it counts down to a fourth quarter delivery target for launch customer Qatar Airways. Testing has passed the 1,000 hour mark and by all accounts is going well. Three test aircraft are coming on line in the next four months to complete the 2,500 flight hours needed for certification. After 1,5 years of delays, the flight test program appears proceeding smoothly and tracking to plan.

Boeing and Bombardier should have had it so good with the 787 and CSeries. The 787 program was delayed nearly four years, interrupted by design and production issues and an in-flight fire on final approach to a landing in Texas involving a power control unit. Bombardier last month announced a new delay, its third, in the CSeries countdown to EIS, this time of 9-15 months.

With flight testing heading for certification in August-September, Airbus says the big challenge is now the production of the serial airplanes. Having been following the production preparations over the last two years, here is our view on how Airbus stands in their industrial ramp up. Airbus plans to ramp up to 10 A350s per month four years after EIS, and it is talking with suppliers about a higher rate.

Airbus has since its inception in 1966 used the principle of pre-equipped sections of the aircraft which are completed are remote locations and then flown to a Final Assembley Line (FAL) at Toulouse for final joining together to a complete aircraft. This principle, called FAL and pre-FAL, was invented by Airbus production father, Felix Kracht, as gifted as its original chief designer, Roger Beteille. The pre-FALs were a clever move to give the participating countries enough systems and integration work for them to give up their demand for multiple final assembly Lines, a devastating inefficiency that had plagued previous cooperation projects in Europe.

The historical pre-FALs have today morphed into competence centers with accompanying production facilities. The pre-FALs for the A350 are:

·         Filton and Broughton UK, competence center and production unit for wings. These then gets shipped to Bremen who does the final pre-FAL assembly of the wings with their high lift systems.

·         Getafe Spain, which is the pre-FAL for the horizontal tailplane produced at Puerto Real

·         To this shall be added the engine, the Rolls Royce TXWB, which is produced at Derby UK.

All these pieces of the total airplane are produced as complete modules with all systems installed except cabin walls, seats, galleys etc. They are also tested for their correct functionality at the pre-FALs.

At the A350 final assembly line all these sections are built together at seven different stations. The stations are named in reverse order; the pre-FAL sections are gathered at Station 59 and final checkout of the finished aircraft is done at Station 20.

We have followed the A350s production through these stations over the last two years. The time that each aircraft spends at the FAL stations gives a good picture of the production readiness of the program because any non-maturity of the sections or traveled work means more work packages have to be completed at FAL and more time spent in the troublesome stations. The following graphs shows how the FAL has performed since the first test aircraft MNS001 entered FAL in July 2012.

The first graph shows elapsed time in the different stations. One can see how gradually the FAL time has gone down from 300 days to (our prognosis of) 220 days for the last prototype, MSN005. This prototype is now in Station30 and will be flying end of May: 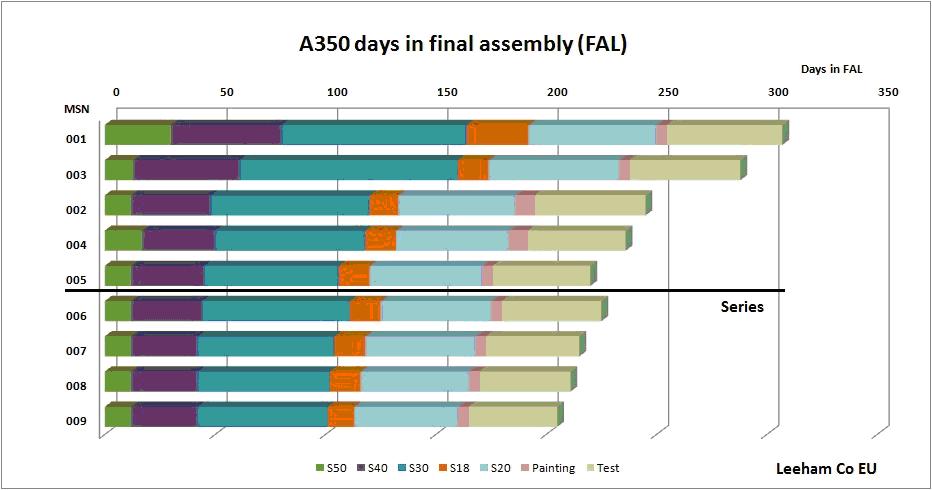 ·        S59: the reception station for pre-FAL sections and where fundaments are fitted which are too large to enter through the doors (galleys, toilets, large fundaments)

·        S40: the wing, horizontal and vertical tail join station where also pylons are hung and the cabin walls are fitted. During the operations the electrical system is also checked out for the completed aircraft.

Airbus produced a video showing how the FAL functions

To make the FAL time graph more readable, we have added 20 respective 10 days of cabin installation days at S30 and S20 for MS004, which does not have a cabin nor a heavy instrumentation fit. Without this addition, it would have been difficult to see the trend for other MSN004 stations. 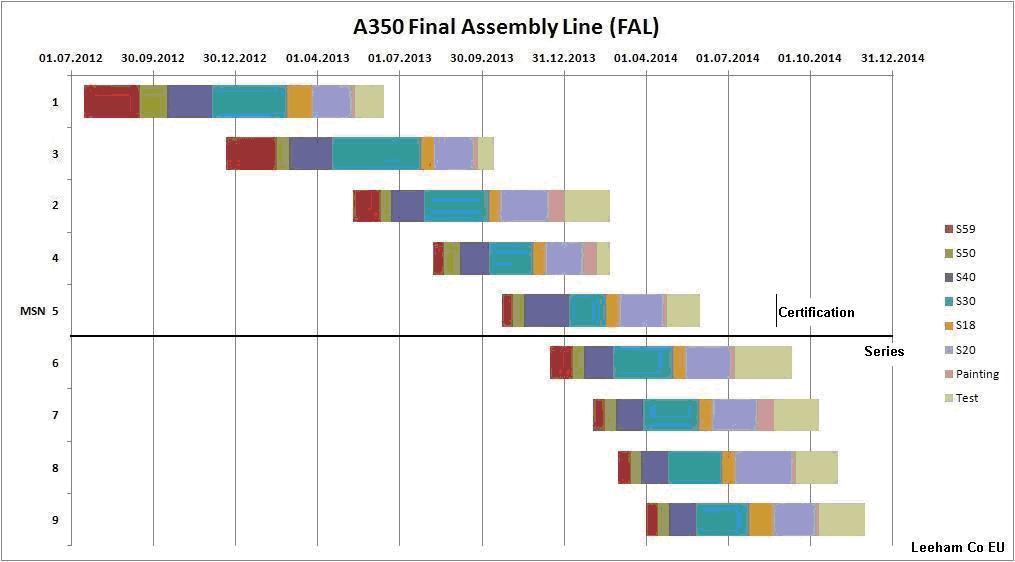 From these 2 charts one can draw some conclusions:

·         The A350 FAL shortens the assembly times in the different stations monotonously. This shows an early learning curve and the diminishing level of elaborate test instrumentation installations. It also shows a low level of FAL dramas, i.e. traveled work or parts that does not fit.

·         MSN5 is the first serial like aircraft with virtually no test instrumentation. Its FAL time is a good yardstick for the time MSN006, the first A350 for Qatar, will spend in FAL.

·         With added test time for final inspection and delivery to Qatar, the predicted time for delivery is still ahead of the communicated times of December (Airbus) and November or October (Qatar).

From the above it is clear Airbus has built in margins for any delays in certification or delivery issues with the first EIS A350 for Qatar. One can also see that Airbus should be able to deliver an additional three aircraft before the year draws to a close if things run to plan.