Air New Zealand and Boeing displayed the industry’s first 787-9, of which ANZ is the launch customer, in a media show-and-tell today.

ANZ touted its black-painted exterior and black-decorated interior for what it called a game-changing airplane that is better than the 787-8. Officials noted this is the first time an airplane stretch has more range than the shorter version. 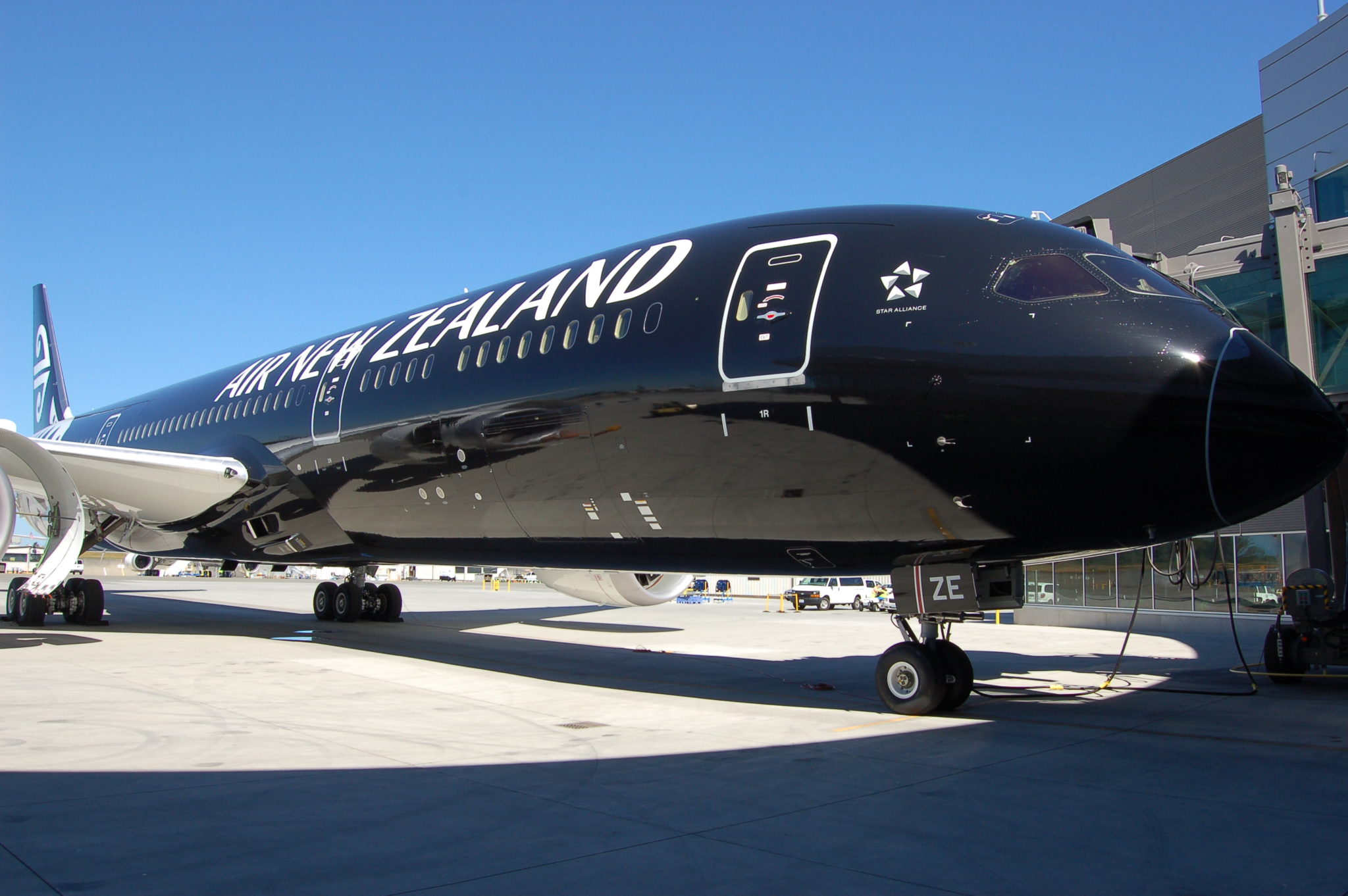 Air New Zealand is the launch customer for the Boeing 787-9. It displayed the plane July 9 in a show-and-tell for international media. Photo by Scott Hamilton.

Boeing officials pointed to a more efficient production system, better engineering and lessons learned from the 787-8 program that produced an airplane that is expected to at least match the current dispatch reliability of the 787-8, if not better it, upon entry-into-service in the coming weeks. The 787-8 had a difficult EIS and a lower-than-expected dispatch reliability. Lessons learned should overcome all these disappointments.

Rolls-Royce was also present, touting the Trent 1000 on the 787-9, which the official there said is up to specifications; the earlier Trents on the 787-8 initially fell short and were subject to several Performance Improvement Packages (PIPs) to bring them to spec. 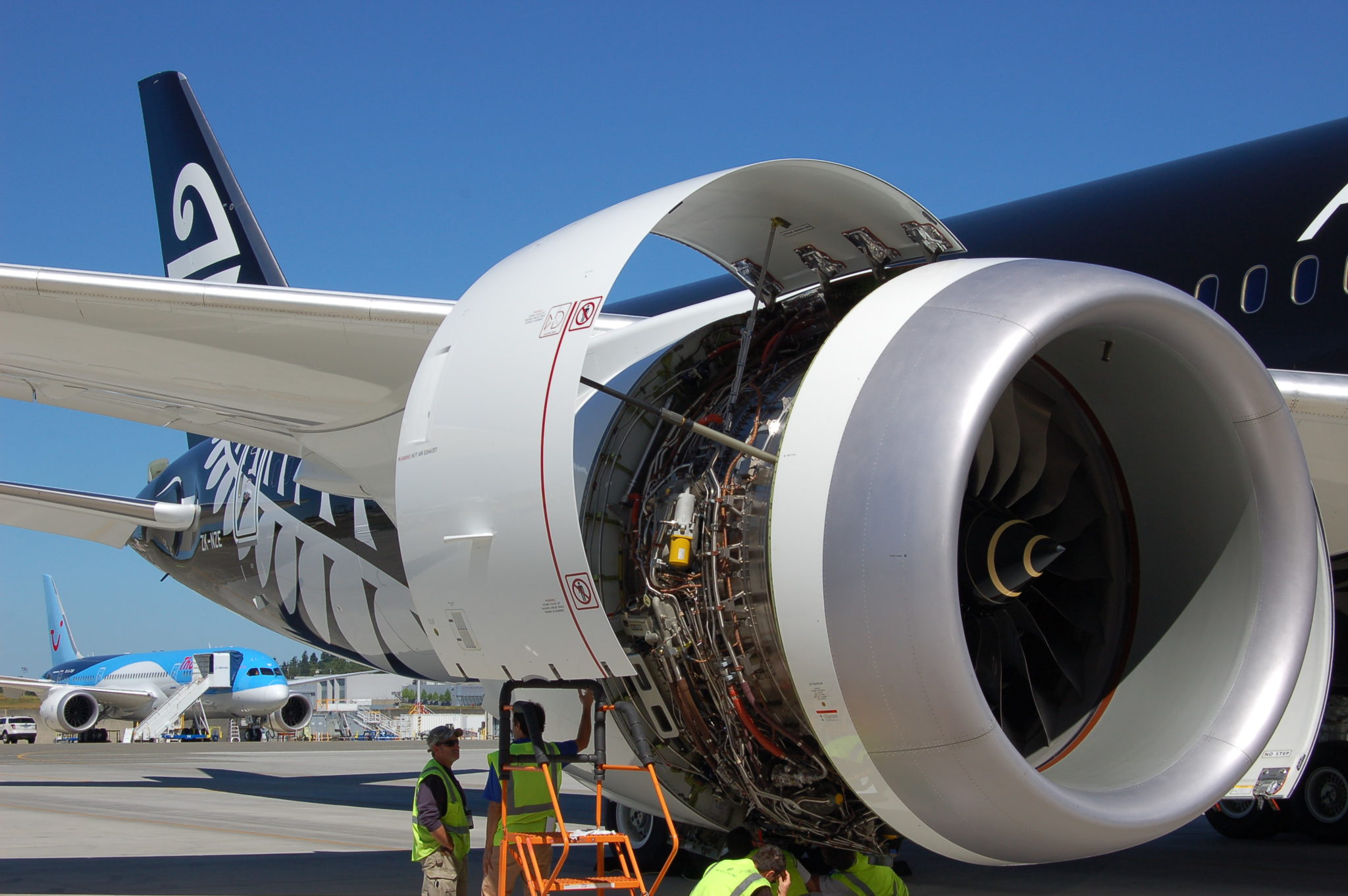 The Air New Zealand is powered by the Rolls-Royce Trent 1000 engine. Photo by Scott Hamilton.

The 787-9 is a milestone for the program, agrees Mark Jenks, VP 787 Airplane Development. Software problems, design challenges, too much weight and other issues that plagued the 787-8 have been eliminated in the 787-9, he says. Work was brought back in-house to Boeing and more engineering was done by Boeing than by outsourced companies. All of this serves to prepare the sub-type for a smooth EIS, he says.

The 787-9 also has 330 minute ETOPS, though Capt. David Morgan of ANZ–the company’s test pilot–says ANZ doesn’t expect to use it in the near term. ANZ is currently only using 220 minute ETOPS (by the Boeing 777-300ER). New Zealand to South America will eventually be served by the 787 and 330 ETOPS will be needed then.

(As an aside, Morgan said that on the 777 routes, the ETOPS is used to sometimes fly a slightly longer route but with more favorable winds, reducing fuel burn and carbon emissions despite adding 5-6 minutes to the flight time. While this is inconsequential to passengers, the time saved per flight over the course of the year adds up to real savings and reduced emissions.)

Entering the ANZ plane, complete with the mood lighting that is a feature of the 787, is dominated by black seats and trim–something that intuitively is not a design feature that would seem to work–but it does. 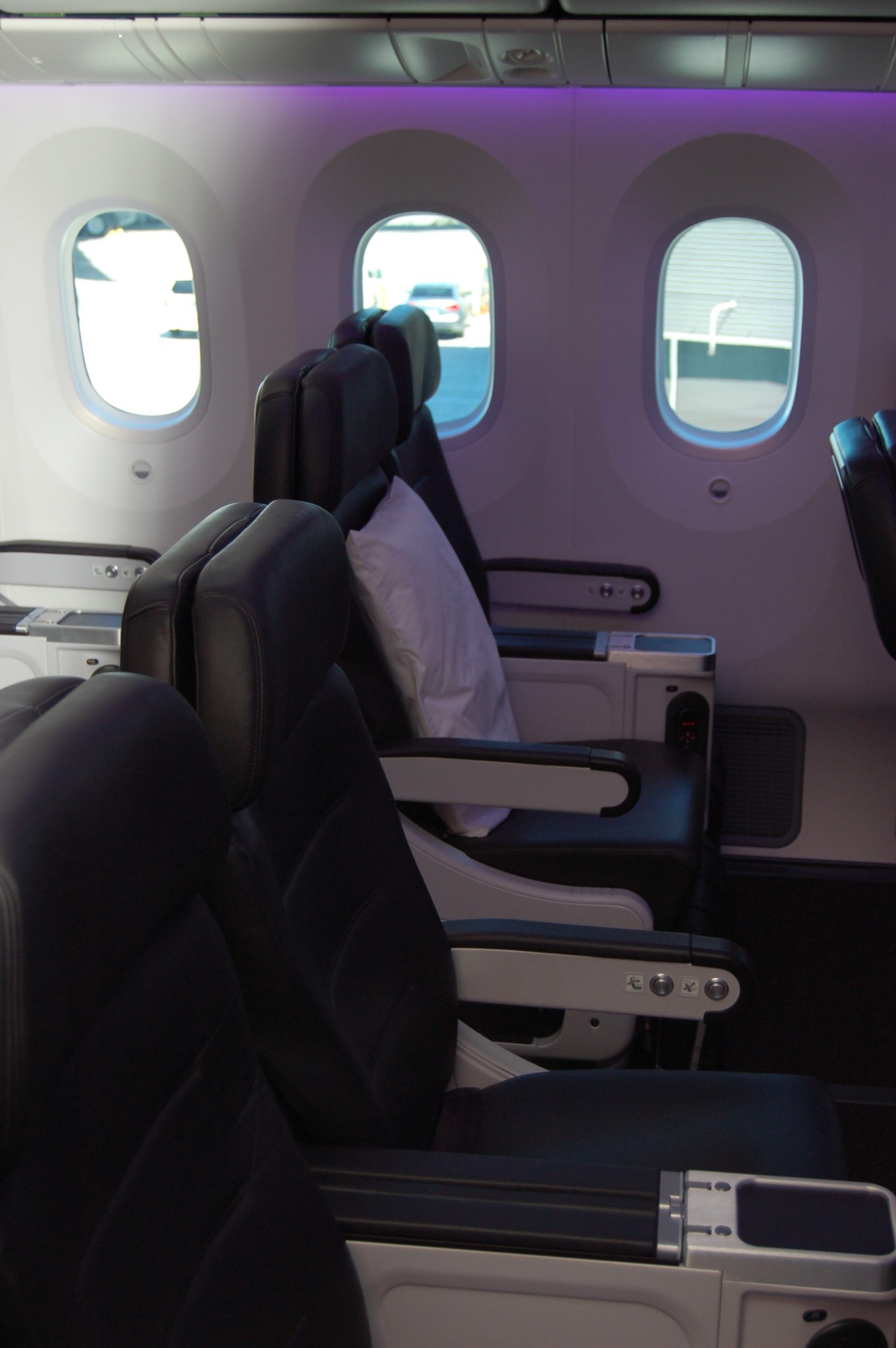 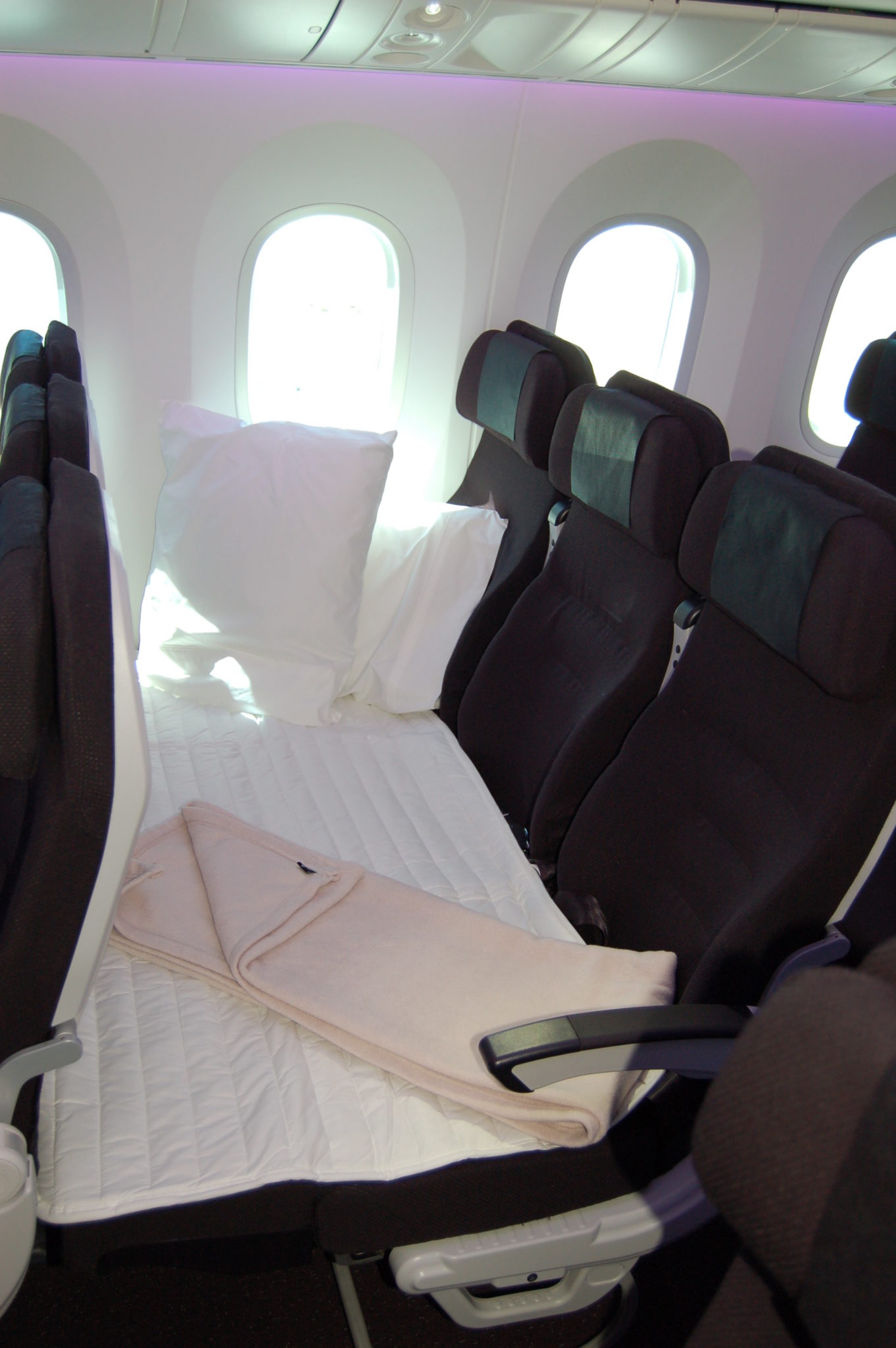 Air New Zealand offers an option in coach to buy all three seats, which permits a bed to be created. Photo by Scott Hamilton.

One of the more interesting features created by ANZ is something to spruce up one of the most necessary but least aesthetic areas of the airplane: the bathroom. ANZ decorated the bathrooms with designer wall paper. One design is quite fitting: illustrations of bookshelves of books, suitable for any reading room. 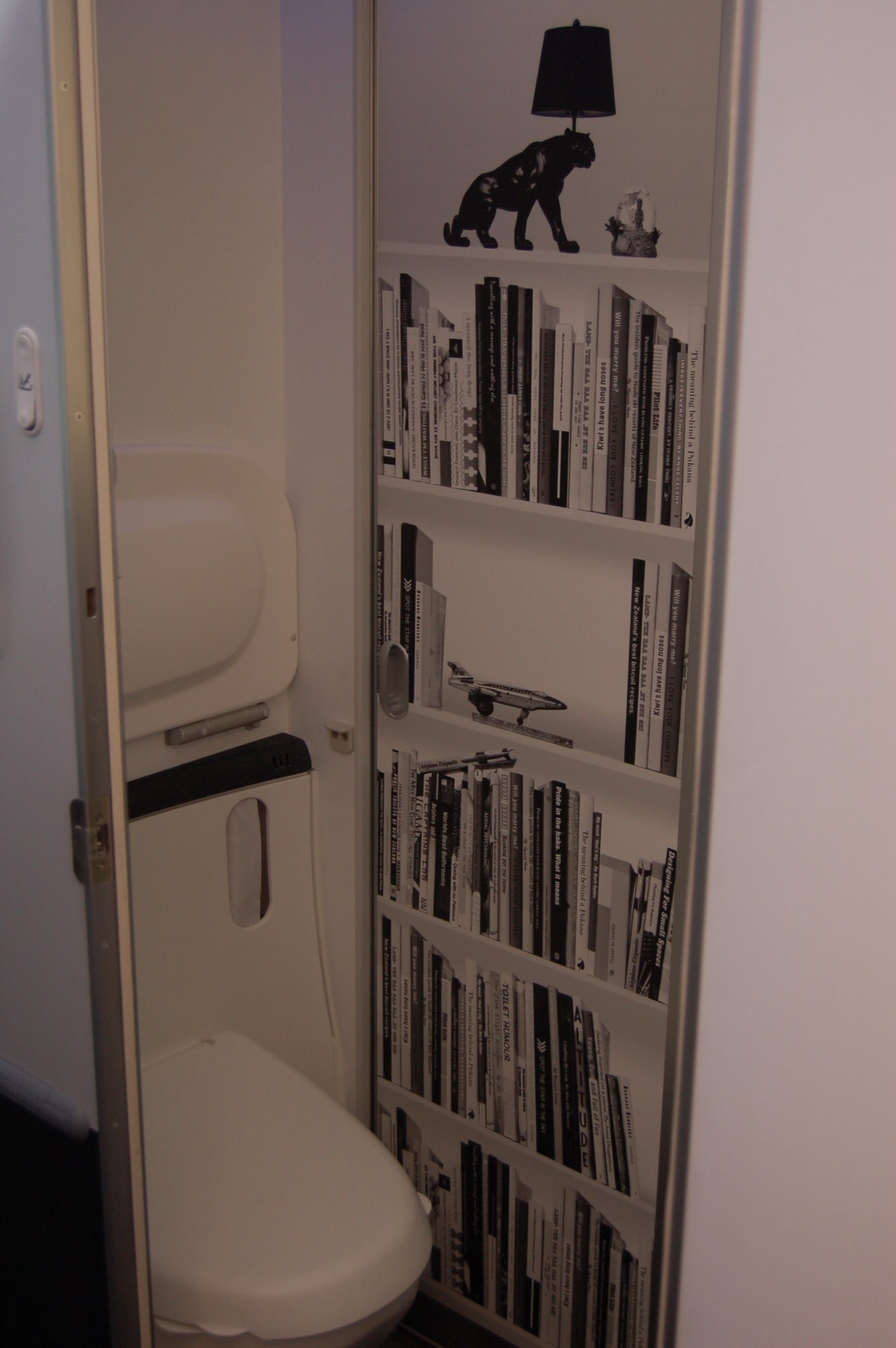 In a photo the books may look real but it’s only wall paper. Still, Air New Zealand–known for its humorous flight safety videos–makes the toilet look like any reading room. Photo by Scott Hamilton.

Rolls-Royce said the 787-9’s engine incorporates improvements from the 787-8’s early Trent 1000 model and that the forthcoming 787-10’s Trent 1000 TEN (pronounced T-E-N, not “ten”) will have features from the Trent XWB developed for the Airbus A350 XWB that will improve fuel consumption and be lighter weight.

ANZ gets its next -9s in September and October. This one will initially serve Australia and routes that follow will be to Asia. Eventually the -9 will serve Vancouver, Canada, a 14 1/2 hour flight.

← Comparing the A330 and 777 Classic backlogs
Is the A330neo engine Rolls Royce’s first carbon fan model? →