Airbus last week announced it will reduce production on the A330ceo from 10 per month to nine per month, beginning in 4Q2015. We predicted in 1Q2014 that the rate would have to come down, due to the sharp decline in the backlog beginning in 2016. 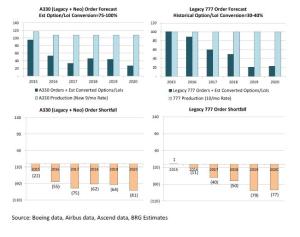 Buckingham Research Group included this chart in its note Friday about the Airbus A330 production rate cut announcement from 10/mo to 9/mo in 4Q2015. BRG predicts a 777 cut from 8.3/mo to 4.3/mo in 2017. We think the rate will step down, first to seven and then to five, before production of the 777X begins. Click image to enlarge.

We also predicted then that Boeing will have to reduce the production rate on the 777 Classic due to its sharp decline beginning in 2017.

Boeing so far continues to claim that it can maintain its production rate at 8.3/mo right through the introduction of the 777X into service in 2020. We don’t believe it can. We’ve illustrated why we believe a rate cut is inevitable. Buckingham Research Group, in a note issued Friday following the Airbus announcement, neatly encapsulates the data in a single chart.

What’s important here is that BRG (as did we) includes orders, options and Letters of Intent for both the A330 and the 777 Classic–and there still are significant gaps between the current 777 and revised A330 production rates.

Airbus still hopes to land an order for as many as 200 A330ceo “Regionals” from China, which would go a long way toward filling its order gap–if it happens. There is an air show next month in Beijing that would be a natural forum to make an announcement, but these opportunities have come and gone in the past.

Boeing currently has 25 777s Unidentified, which are factored into our analysis and into BRG’s. President Obama will attend a pan-Asian regional conference held in Beijing concurrent with the air show, and we expect a Boeing order announcement that probably will come out of the 930 Unidentified 737 orders, the 777 backlog and maybe some of the 25 Unidentified 787 orders.