Dec. 5, 2014: Boeing retains the lead in net orders going into the last month of this year, although the gap has narrowed considerably–and there are a couple of public campaigns and commitments Airbus has announced or talked about that could shift the year-end balance.

Boeing has been less open about pending campaigns, so it is harder to gauge potential orders this month. 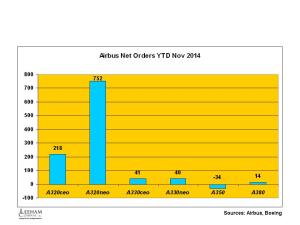 Year to date, Airbus reports 1,031 net orders and 297 cancellations, including the 70 A350s canceled in June by Emirates Airlines. Boeing 1,274 orders net of 106 cancellations, for a net advantage of 234 orders over Airbus. Airbus previously announced a commitment from Indigo Airlines of India for 250 A320neos and it continues to press China for an order of 70-200 A330 Regionals. Airbus also said it expects an order before the end of the year for the A321neoLR, but the quantity has not been specified. 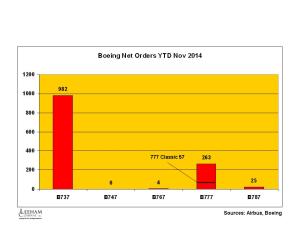 Boeing has said it hopes to win a sizable order from Avianca for the 737 MAX, but we’ve had soft indications this has gone to Airbus.

Boeing’s total was boosted nicely by converting the launch order commitments for the 777X announced at the 2013 Dubai Air Show into firm orders.

Boeing won 57 orders for the 777 Classic, including the 10 from Kuwait Airways, which we don’t believe have yet been inked but which are included above. Fifty seven was the figure announced by David Muilenburg, president and COO of Boeing, at the Credit conference this week. 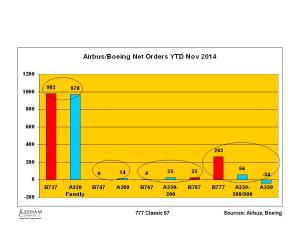 In Figure 3, we’ve combined the orders from Airbus and Boeing into one slide and grouped the airplanes into their respective competing categories for comparison.

YTD Airbus and Boeing are about even on single-aisle airplanes and Boeing, aided by the Emirates cancellation of the A350 and its own 777X conversion to from commitments to orders, clearly wins the twin-aisle sector. Airbus converted only 15 of the 121 A330neo commitments announced at the Farnborough Air Show into firm orders through November. We don’t believe it will convert the remainder to firm orders by year-end, though some might convert.

← At what price do used A380s make sense?
USAF moves up AF One replacement, reports Inside Defense →