The US Air Force has picked the Boeing 747-8 as the replacement for the 747-200-based Air Force One, reports Bloomberg News. The decision comes as absolutely no surprise.

Airbus didn’t submit a bid to supply the A380 for Air Force One.

Airbus didn’t submit a bid for its A380 to serve as AF One, something that was probably considered such a remote possibility of being selected that it wasn’t worth its time. It will compete on systems, however.

Boeing hopes to sell the 747-8I to Turkish Airlines, which is considering a widebody order to be decided this year. The 747-8 is against the Airbus A380, with a quantity of 10 under consideration. Boeing is also offering a combination of 777-300ERs and 777Xs in lieu of the 747-8. 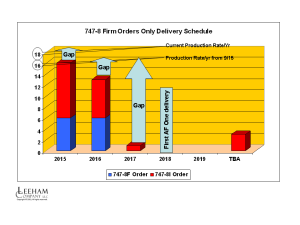 Boeing has a production gaps for the 747-8 program. Firm Orders for the freighter and passenger airplane fall short this year and next and are virtually non-existent in 2017. There are a small number of firm orders deferred. The first 747-8I for Air Force One is to be delivered in 2018. Click to enlarge into a crisp view.

Absent an order from Turkish, or any others, we now see Boeing announcing an end to the 747-8 perhaps as early as this year, effective with the delivery of the two 747-8s to the USAF. 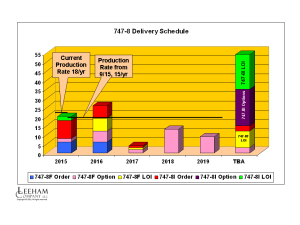 Boeing’s 747-8 production gap looks better if Options and LOIs are included, but filling the gap depends on exercising these and obtaining new orders. Click to enlarge into a crisp view.

← Boeing earnings conference call: We’re in better and stronger position than ever, says McNerney
A350-1000 gets upgrade to 387 seats; we analyse the consequences →