16 April 2015, C. Leeham Co: As described last week, I was asked if I wanted to fly an modern airliner later in the spring and you can guess my answer! Having accepted the challenge, it was time to think about how to get ready. Even though the flying I once learned would sit, modern airliner flying is 90% about the procedures and how these make the transportation of passengers safer and more reliable.

This is something different than just flying the around in the aircraft. It is all about how the aircraft manufacturer has created an environment for consistency, economy and safety and how the goalposts in these dimensions gets moved further and further out. That is what we should test.

I cannot reveal what aircraft it will be, but my tools for training will give away the general type.  I am right now using Airbus flight simulators and manuals to refresh my flying and learn the procedures used.

I prefer to do the training myself; I have always learned best that way. Some things are hard to get into the head. Then it takes a very long time to pass this part of the syllabus. Other things just click and they are there. When self-learning, the pace can be adapted to this roller coaster of mental assimilation.

First one has to understand the concepts used in the aircraft. For me, the systems and performance part is almost a given, developing the airliner performance model we use has given me a good understanding of aircraft performance, fuel planning, cruise profiles, weathers influence etc.

What is harder to learn is the logic of the aircraft. As described in last week’s Corner, a modern airliner is flying 95% of the time in autopilot and auto-thrust modes. How these work together and which modes are used for what part of the flight and then how they hand over to each other is tough to learn in a matter of days.

The system aspects of the aircraft is described in the Flight Crew Operating Manual, FCOM, ie the aircraft’s Pilot handbook. This is around 4,000-5,000 pages of detailed description of all the ins and outs of the aircraft and how to manage every possible situation. Where the back-up strategies when things don’t work take as much place as describing what to do when things work.

For a test flight, it is a bit stiff to plow these FCOMs. Better is to have it as backup to a Flight Crew Training Manual, FCTM. The one I have been using is around 300 pages and I have read about two thirds of them. But that is not enough. There are so many logical schematics and flow charts that one simply must test how things work out in practice.

I have been using professional flight simulators for my fighter training and also have been testing others like the Embraer KC390 simulator that I tried when visiting Embraer last autumn. I have tried Microsoft Flight simulator enough to know that there was a possibility to build a quite good training environment in one’s home if one got hold of the right hardware and software additions and got it all to work.

There are more flight simulators that are good than the one developed by Microsoft. Microsoft no longer develops or sells the flight simulator, but the community around it uses the existing version as a base for very sophisticated additions and one can still buy the last version called FSX. Some of the alternatives are more advanced than FSX but for my purposes, a procedurally correct version rather than the best flying or looking one, Microsoft Flight Simulator X, FSX, was good enough.

I then started to locate all the bits and pieces I needed on top of a flight simulator copy I had lying around (not really used more than for a check out some 10 years ago). The best way to understand what one shall buy is to find the right forums and read what others have learned. I got the right pointers from Airliners.net’s “Aviation hobby” section. There real pilots (I knew them from the main forum, Civil Aviation) said what dedicated flight simulation forums was the right ones.

While hunting down the info for the real things, I had dusted off flight simulator and got it going on my home computer. It was as cranky as I remember it. Even flying the simple types I had actually flown in real life like Mooney 20J or a King Air was difficult and no fun.

The forums strongly recommended not flying with mouse or keyboard (which I had done) so I bought one of the recommended joysticks with throttles on, trim buttons and cillions of push buttons etc. That made all the difference. Suddenly I was having fun flying touch-and-go on aircraft I knew and enjoyed fiddling with their simple autopilots and flight directors. I flew them on the virtual airfields and airways I expect my test flight to use. Great stuff! Suddenly Microsoft Flight simulator was fun. I even took out a Zlin copy and did a bit of aerobatics. In the middle of a looping, one can hit Pause and go and have a coffee.

While getting the joy back to simulated flight my first airliner package arrived. I installed it and read the manual. Consternation and frustration, the manual did not jive 100% with the FCOM and FCTM I have for the type. There were shortcuts all over the place. At 50€ it was no big drama if I just could find a better one. And I did. I found through forums and YouTube demo videos Aerosoft’s Airbus A320 range. There were many YouTube videos for this application and they were very exhaustive, flying complete missions around the world. It was clear the first version was ambitious but buggy but there was an updated version of the Airbus 320 range which was good. There were even real A320 pilots with videos on YouTube saying, ” this is good stuff, fun and realistic to fly.”

This time I bought it in download version so could install it on the double. It was comprehensive, made in Germany and it showed. A full eight different PDF manuals and four helper applications popped out of the installer together with the whole range of Airbus single aisles, A318 to A321, in any airline livery you might want.

Flying an A320 simulator

Now 10 days later I have ploughed the manuals and flown the first sectors. I have also compared to the FCOM and FCTM and it is impressive. The most important for me is not the feeling in the flying, even though that is not bad. It is the precision in the check list used and the rendering of all the controls that shall be manipulated and displays that should be read.

Figure 1 shows me flying a mission from Innsbruck airport in Austria to Nice in France, my home airport. I have just started from Innsbruck using a Standard Instrument Departure, SID, that curves through the alpine valley where Innsbruck resides. It is tight and the SID must be followed with precision, I’m therefore happy to engage the autopilot short after gear up. The autopilot flies with a precision that is hard to achieve without concentrating 100% and then there would be no mental capacity left to check that everything is going along as instructed in the SID. 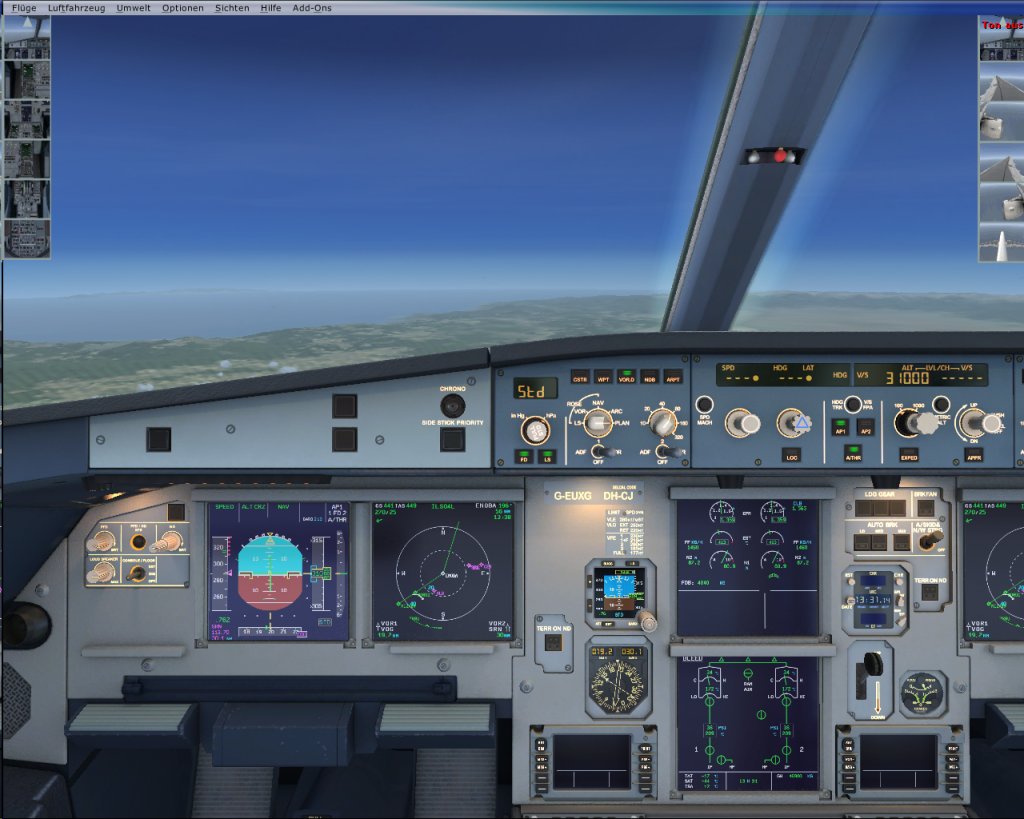 Figure 1. Training airline flying with Aerosoft’s Airbus A321, approaching the Italian Riviera on my way to Nice from Innsbruck. Source: Leeham Co.

The picture is when I am further along, I am flying down the Italian Pau plains and approaching the Riviera coast. I am on an airway leading to a waypoint BORDI named after the little coast town Bordighera on the Italian Riviera, descent is coming up, time for approach briefing.

Figure 2 shows the flight map from the manual for our landing at Nice airport. We will use the Standard Arrival Route (STAR) BORD6C for an ILS approach on Runway 04L. 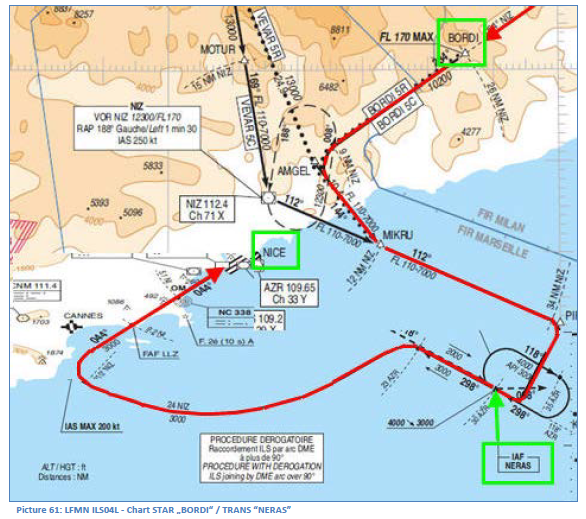 I have just put on the “Fasten seatbelt” sign. The simulator is accurate to the smallest detail and would nag me to taxi in if I didn’t. There are further add-ons one can buy so that each airport and gate, etc., gets rendered with amazing accuracy. This is not for me but the level of honest to reality simulation is amazing, everything for hobby levels of money (my joystick was 80€, worth every cent).

Many professional airline pilots have flight simulation installations in their homes of the type I described or more advanced. Having tried it I can understand why. The performance of modern computers (you need a fast one for this type of simulations but they don’t cost much these days, less than your latest Smartphone) and the add-on packages one can get for Microsoft Flight Simulator (or others) makes for incredibly realistic flight experiences.

These are so painstakingly made that a lot of time goes to learning how to close doors, make announcements to passengers on intercoms or putting on Fasten seatbelt signs. Luckily Aerosoft provides for an automatic co-pilot I call Charlie that can be put in action; he gets to read the checklist out loud and do all the nitty-gritty things like switching on beacons and taxi lights so I can focus on putting in the flight plan into the Flight Management System, FMS, and master the Autopilot.

Then it is just to start the engines, taxi to runway and hit FLX/MCT (Flex Thrust/Max Continuous Thrust) detent on the throttles so things gets moving (there are 30 checklist steps in-between but that is boring to describe and Charlie did most of them anyway). Time to get to Nice before the airport closes for the night.