June 16, 2015, Paris Air Show, c. Leeham Co: On the second day of the Paris Air show we visited several Boeing briefings. The first was Boeing Commercial Airplanes (BCA) update with BCA President and CEO Ray Conner. He elected to not do the usual slide show speech as all slides were available as handout. Instead the whole session was turned into a Q&A, which was good. All hot topics were discussed as questions from the audience. As many were also covered in Boeing’s next session, BCA development update, I will handle these there.

The topics that did not come up in the second briefing were Boeing’s Middle of the Market (MOM) studies for a new mid-range aircraft with 200-250 seats and Boeing’s view on the VLA market. Let’s take MOM first. Conner confirmed that Boeing now has identified that there is a market of around 1.000 aircraft over 10 years which is not served by a suitable aircraft. He dismissed this market being covered by Boeing’s 737 MAX 9 or the Airbus A321LR, both being too small and not having enough range. Range requirement from the many airlines they had visited over the last year was 4,500-5,000nm. The MAX 9 and A321LR have advertised ranges of 4,000nm or less.

Conner said the next step is now to study if Boeing can build an aircraft to serve this market at the price required by the market. “We are early in the studies and don’t expect any concrete decision soon.” He could also not answer if any MOM aircraft parts or technologies could be shared with an up-and-coming replacement for the 737 MAX.

Conner said the Very Large Aircraft (VLA) sector “is a small market. We don’t see that people really want to travel to a point for gathering, then go to the next hub together, only to start spreading out again. People want to go direct to their destination. We are happy with serving this market with our 747-8, especially as part of the small market is freighters.”

In the second Boeing briefing, Senior Vice President BCA Airplane Development, Scott Fancher, gave an update on running development programs. He said “it will sound a bit boring when I go through the programs because the message will be the same. They are well in plan, development is going well, we are generally ahead of time plan if there is any difference and we will deliver the aircraft on time and on spec. This story will repeat itself for the programs we cover; 737 MAX, 787-10 and 777X”. 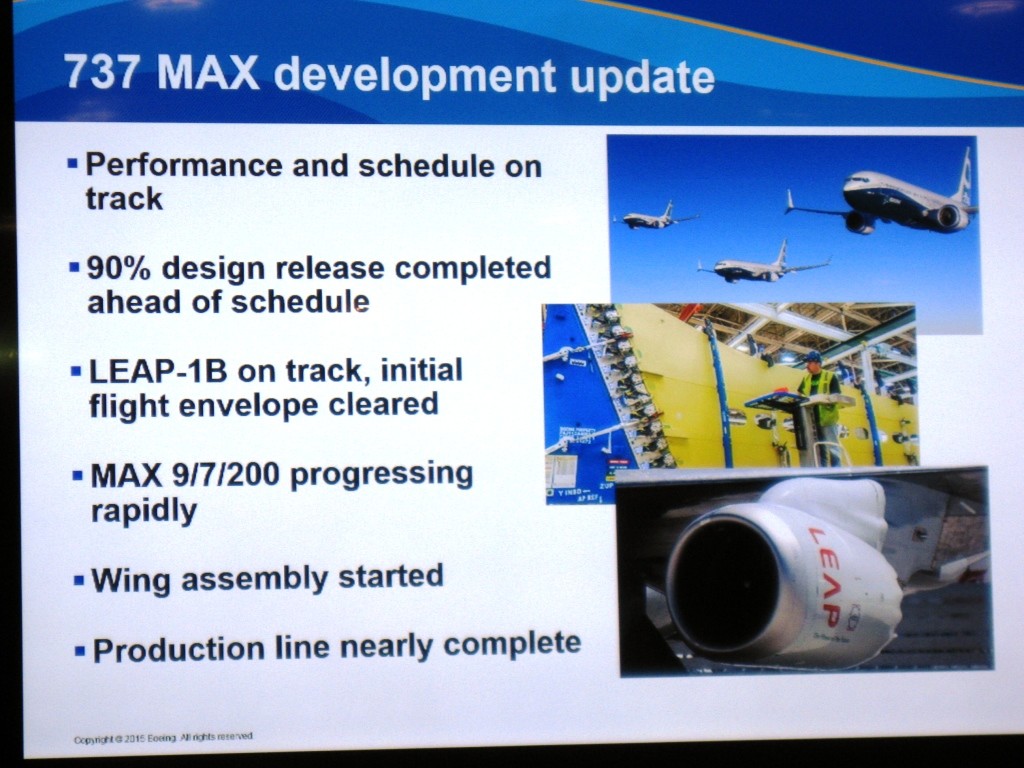 The 737 MAX program is now in the final stages of detail designed with 90% of all drawings released. Fancher said engine development is on track despite any reports to the contrary and manufacturing of first wing for first flying test aircraft has started.

Fancher said that when finished, the program will have the following deliverables: 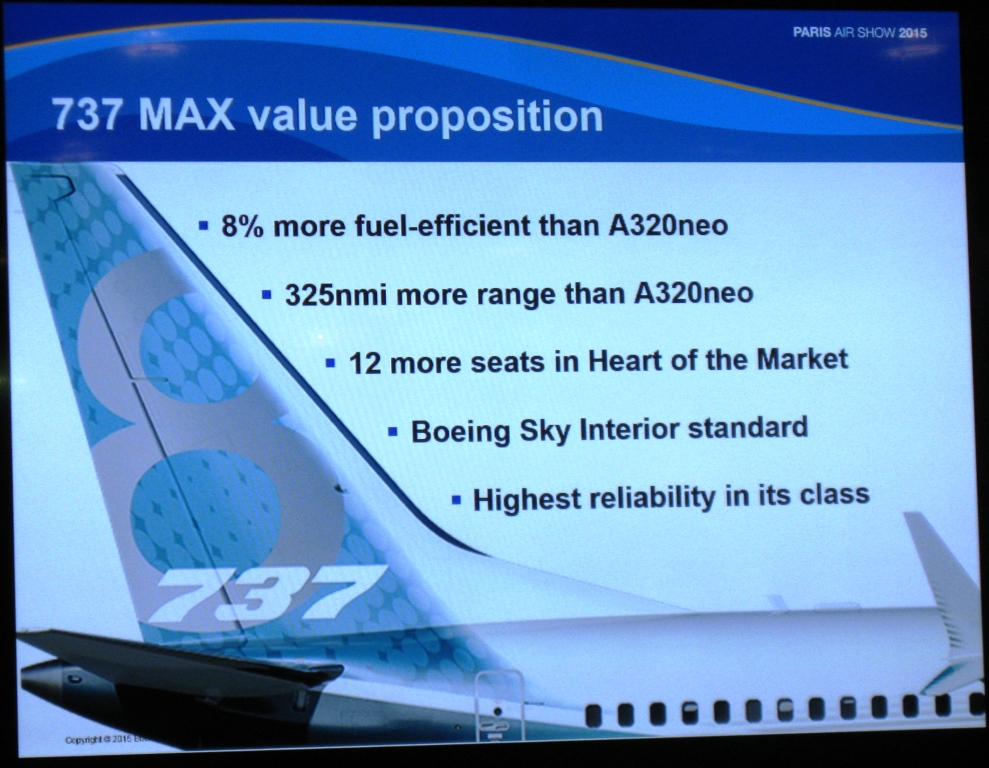 I will not comment on these targets as any discussion of these objectives are best done in our questions and answer section on the blog.

The program has passed firm configuration and is now entering detailed design. 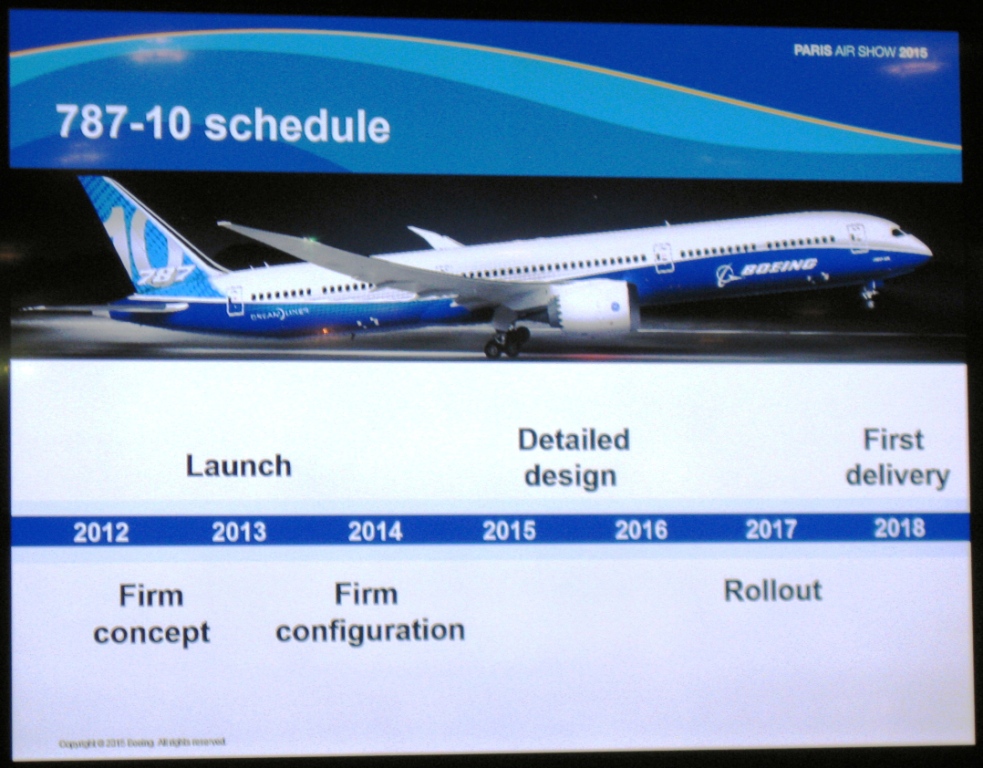 The program’s big advantage is the high commonality with the successful 787-9 program. A 95% parts commonality will mean not only development and production advantages but also operations advantages as 95% spares will be the same between 787-10 and -9. 787-10 will pass the 90% release of drawings milestone before end of 2015. 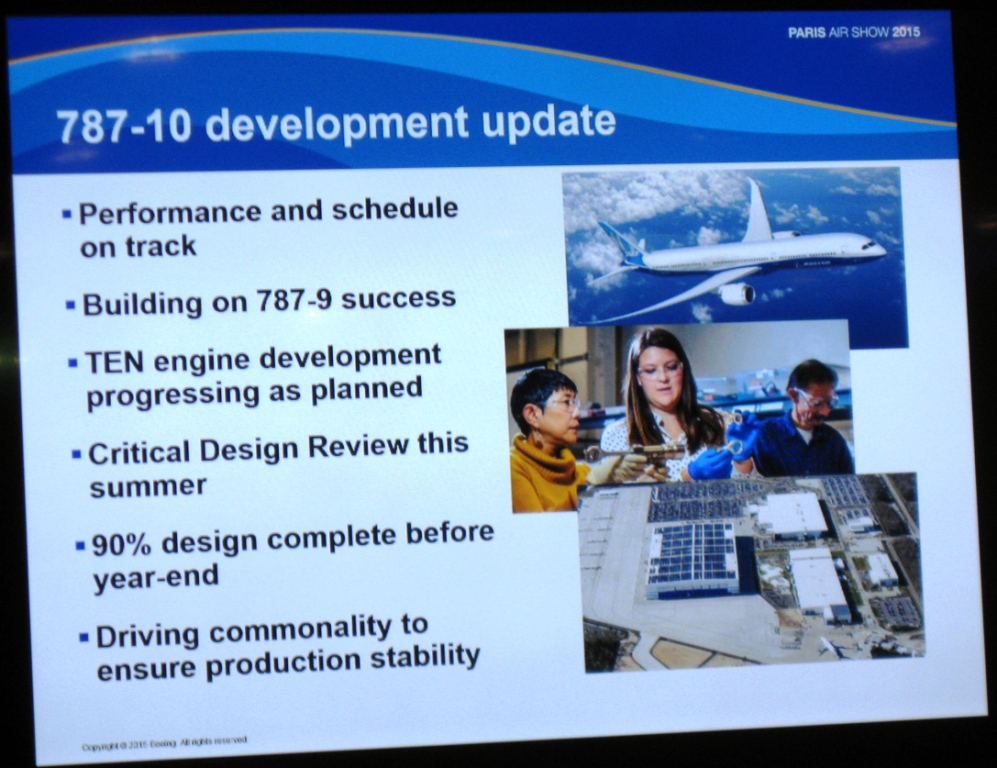 The claimed deliverables from the project is shown in the next slide. 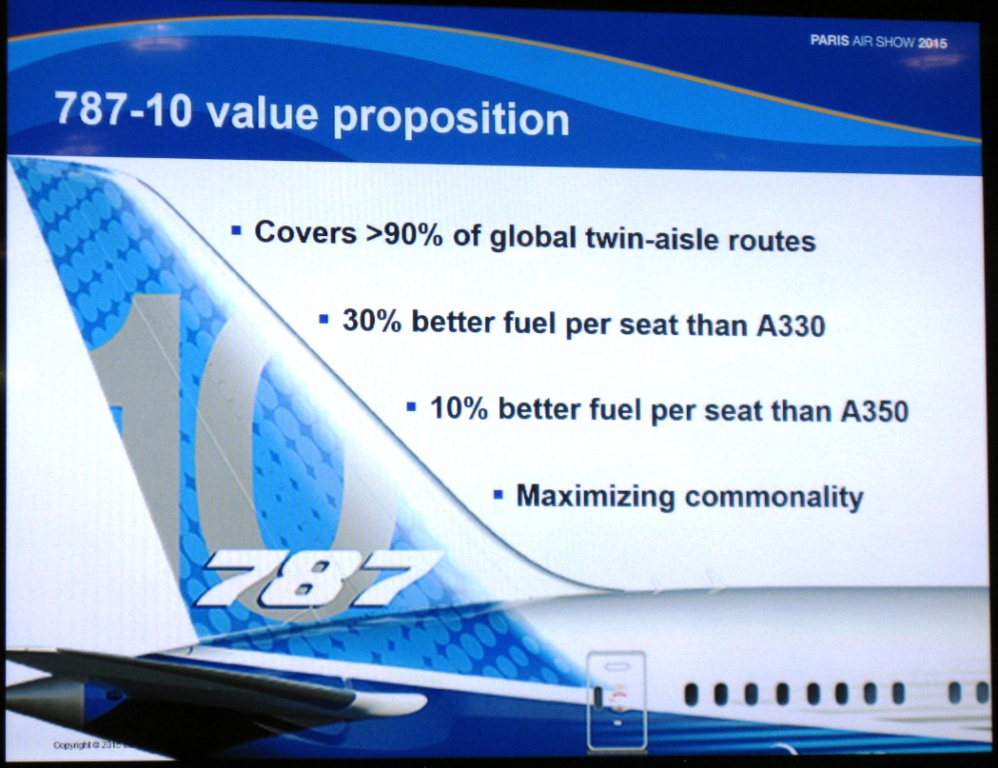 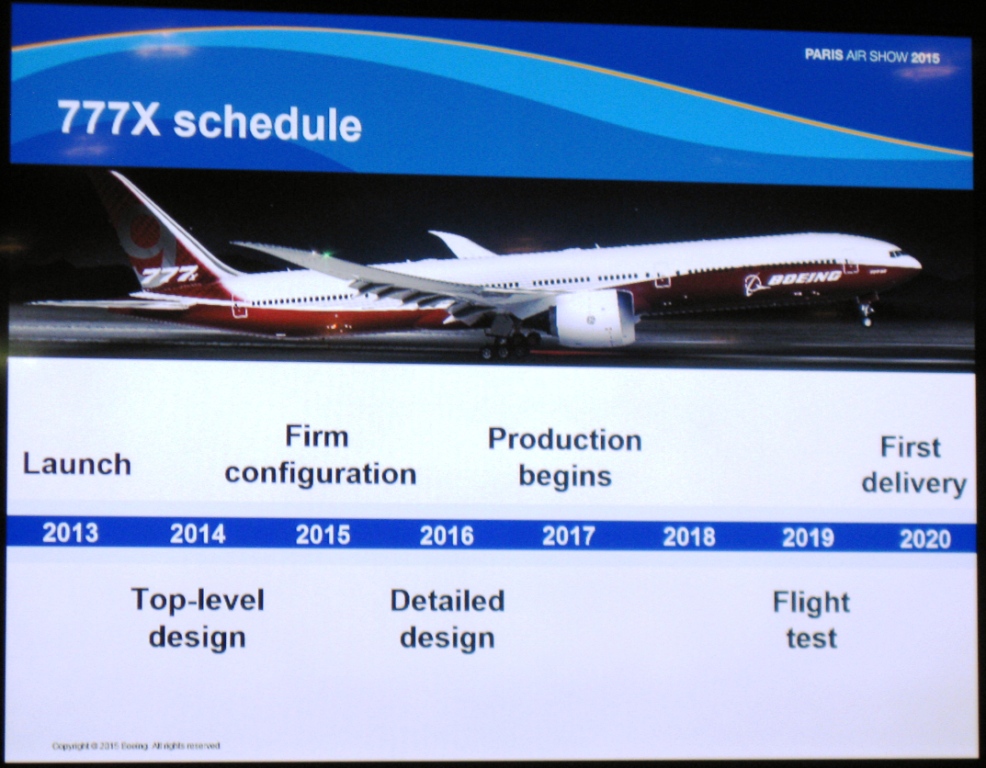 The 777X program is now in the firm configuration phase. Fancher mentioned that this means that one settles on overall specification for the aircraft and that 777-9X is now transporting 413 passengers over 8,000nm. This is a change from previous 400 passengers over 8,200nm. The 13 extra passengers explain 50% of the range change but 100nm is unaccounted for. Typically increased weight depresses range.

The reason for our engine question was that the fan diameter of GE9X was increased from 133.5 to 134 inches in January this year. Our information is that this was the result of the project now demanding 110,000 lbf Take-Off thrust from the engines. Fancher’s answer was that to his knowledge there had been no change in engine specifications over the last year and that engine thrust was at 105.000lbf.

A gradual demand for thrust increase for an aircraft project in the phase where 777X is now is normal. Over the lifetime of an aircraft development project a weight increase of around 5% is almost norm in the industry. One change that certainly contribute to any weight and thrust increase in the program is last year’s decision to split the new composite wing in a composite-aluminium-composite design, where the wing centre section is kept aluminium to ease fuselage interface issues. I discussed this with Fancher and he said that in the total trade on where to put this interface, keeping of the centre of the wing aluminium was the better choice.

The claimed deliverables from the project are: 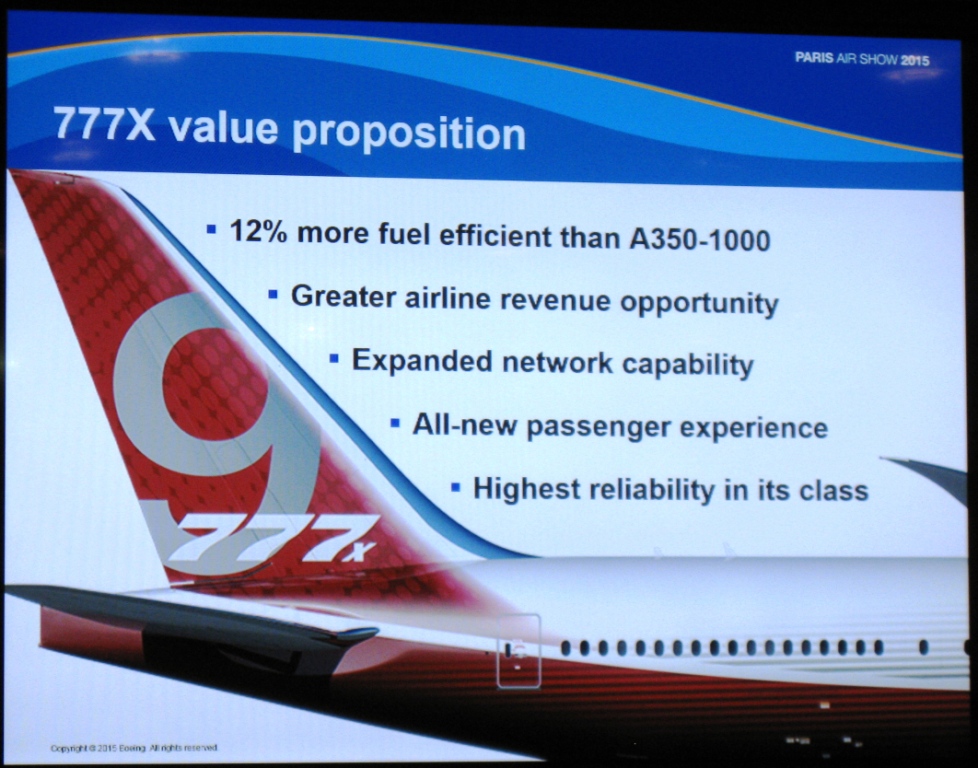 Fancher said the centralised development organisation cut its ropes with 787-9 and 737 MAX and both projects have gone well. The advantages of the centralized approach “resource pooling, resource scheduling efficiency and the building a strong knowledge on how we do things, all of which help, he said.