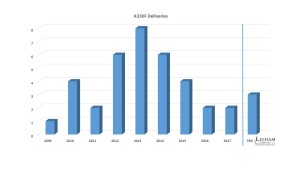 Figure 1. A330F once tallied more than 60, but many were converted to passenger models. Today there are just 38 orders. The delivery stream shows a tapering off. Click on image to enlarge.

The Wall Street Journal reported that Europe-to-Asia volume and rates are falling.

“Maritime and air freight rates for some of the world’s busiest trade routes are tumbling as slower growth in China combined with a sluggish eurozone economy dash forecasts for higher volumes during the normally busy late-summer season,” writes WSJ’s Robert Wall, who is based in London. “The air-cargo market is suffering on several fronts. Lower demand in Asia is coming at the same time air-cargo capacity is climbing. A large chunk of the air-cargo market is transported in the hold of passenger planes. With major airlines adding flights globally this year, that is weighing on cargo rates. Falling fuel costs also are delaying plans by airlines to retire older jets, exacerbating the problem.”

Cargo Facts takes a different view on the belly capacity. 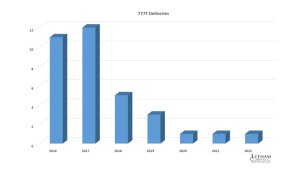 Figure 2. Boeing 777F orders and deliveries were robust (for freighters) in the early years after launch of the program in 2005, but the decline in global air freight took its toll on the 777F. Click on image to enlarge.

“There has been much talk in recent years about a shift of air cargo from main deck to belly, and some well-known carriers have either abandoned freighter operation or considerably reduced their freighter fleets,” Cargo Facts writes. “This has led some observers to conclude that freighters are rapidly becoming irrelevant, but the data simply do not support this. While [there clearly is] an increase in cargo traffic flown by belly-only carriers (particularly domestic traffic) over the last five years, [there are] similar increases for airlines that only operate freighters – both general freight all-cargo operators and express operators.

“[W]hile it is true that carriers like Air France-KLM, IAG Cargo, and Finnair are either cutting back or abandoning freighter operation, there is no sign that ‘freighters are dead.'”

Still, data from the Airbus and Boeing websites show orders and deliveries continue to struggle. Figure 1 shows the delivery stream of the Airbus A330F tapering off during the next few years. At one time there were more than 60 orders. Many were converted to passenger aircraft as the cargo market softened. Today the total orders is fewer than 40. 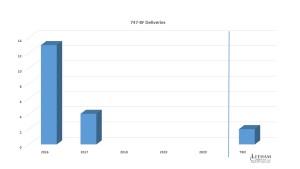 Figure 3. Boeing’s 747-8F delivery stream dries up after 2017. The passenger model deliveries also end in 2017, according to the Ascend data base. Click on image to enlarge.

Boeing’s 777F started out robustly when the program was launched in 2005, but like the A330F, demand has tapered off significantly. For Boeing, this is especially problematic as it tries to bridge the production gap between the 777 Classic and the 777X. Passenger demand for the 777-300ER has largely dried up and Boeing has been counting on the 777F to supplement orders. One from FedEx for 10 777Fs is believed to be the 10 “commitments” of the 44 “orders and commitments” (there are 34 identified orders) officials spoke of on the 2Q2015 earnings call. Now that a pilot contract has reached a tentative agreement, and FedEx has made an offer for Europe’s TNT, we expect the commitment to be firmed up before the end of the year. We don’t have information about the delivery stream, however, the important gap-filling goal Boeing has (Figure 2).

With scores of main-deck freighters of all types stored in the desert, and more Boeing 747-400Ps being retired soon, there is plenty of cheap lift to throw at a recovering air cargo market–but the recovery has been predicted now for years, without materializing to the level needed to spur new-build demand.