Boeing firmed up an order for six 777 Classics early this month there are at least two campaigns in which Boeing hopes to land orders for around 20 777-300ERs.

But it’s the all-important delivery stream that isn’t announced with orders which raise the question of whether Boeing can bridge the gap.

The last 747-8 that is not a white tail is scheduled for delivery in May 2017—hardly enough to match the production rate in 2016 of one per month through August–or even the newly announced reduced rate of one-half per month from September.

Boeing booked a net of two 747-8F sales last year, but these were white tails sold to Boeing Capital Corp. for lease to Air Bridge Cargo. 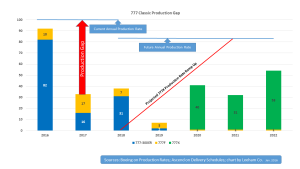 Figure 1. Click on image to enlarge. CORRECTION to this chart: the figures in Column two were transposed; the “16” should be “61”, with a resulting gap of 22 airplanes.

Leeham Co’s annual analysis of the 777 and 747-8 production backlogs, production rates and production gaps concludes that Boeing needs to sell an average of 35 777 Classics a year—and deliver them all by the end of 2021—to close the gap to full production of the 777-8/9 at the currently announced reduced rate of 7/mo. This compares with Boeing’s previous goal of 40-60 sales a year. In 2015, Boeing booked 38 orders.(Figures 1 and 2.)

The current actual rate is 8.3/mo, or an additional 15.6 airplanes a year. This meant Boeing would have needed an addition 45 or more airplanes over the timeline to fill the gap. 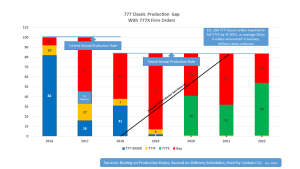 It must be remembered that in pre-Paris Air Show briefings last year, Boeing said that while the production rate would be reduced to 7/mo beginning in 2018, when the first 777-9 enters the line, it would also over the next two years be “shooting blanks” in which a phantom (our word) 777-9 would go into “production” to smooth out kinks and the transition.

This means Boeing will actually deliver fewer 777 Classics than the production rate implies.

But the picture remains anything but clear until Boeing provides detail about the number of blanks and when these are inserted into the production line. Absent this information, the production gap and sales requirements indicated Boeing must sell about 208 Classics through 2021, when we assume the 777-8/9 rate will reach 7/mo–an assumption that may be a bit aggressive (Figure 2).

Boeing hopes to win at least 20 orders this year for 777-300ERs from United Airlines and Turkish Airlines (10 each). No timeline has been suggested for these campaigns. British Airways is also a target, but its CEO, Willie Walsh, told the Airlines Economics conference last week that he’s thinking of leasing used -300ERs instead. Some view this as a public negotiating tactic, since British Air and Boeing are far apart on price, according to Market Intelligence. Walsh wants to pay between $110m and $120m; Boeing wants $145m to $150m, according to the sourcing. United is believed to have a price of $120m for the -300ERs it ordered last year.

Aerospace analysts continue to believe Boeing must further reduce production rates for the Classic. Some are especially pessimistic, suggesting a rate as low as 4/mo. A broader consensus has coalesced more recently around 6/mo.

If rate seven isn’t sustainable (even with blanks) and rate six becomes necessary (including blanks), Boeing’s cash flow is going to be negatively impacted by a delivery stream that is less than the published production rate. Officials hope to make this up through higher production on the 737 and 787 lines.

Completing construction of the 777X wing production building, tooling and setting up the X’s assembly line will relieve some heavy cash requirements. The 737 MAX is already under production, although there is the ramp-up and learning experience costs.

A decision on further lowering the Classic production rate isn’t an easy one, but our information is that it is under consideration.