Boeing’s explanation about the lower guidance for 737 deliveries—12 fewer this year than in 2015—seemed, on the surface, reasonable. As the 737 MAX entered production, both with test aircraft and the first production airplanes, officials said this will lead to fewer deliveries of the NG.

But as stock analysts digested the information, skepticism arose. David Strauss of UBS issued a note last week in which he concluded the real reason for the lower deliveries is a likely production gap—not enough NG sales were achieved to bridge the gap from the NG to the MAX. 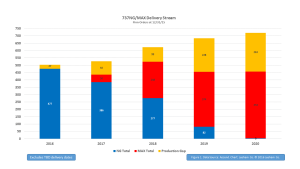 While BA’s explanation seems straightforward, we find it unusual that BA hadn’t indicated any impact on 2016 NG deliveries from MAX prior to this (it also doesn’t appear there was any impact in 2015 when BA mostly built four flight test aircraft). By building more MAX’s in 2016 than expected, BA is partially pulling what we had expected would be a 2017 working capital hit into 2016.

Gap in bridge to MAX

We believe lower 737NG deliveries could be attributable to a gap in the bridge to MAX and therefore BA is diverting available capacity from the NG to the MAX earlier than expected. While BA has ~1,300 737NG’s in backlog currently, examining the most recent Ascend data would indicate unfilled NG slots during the bridge period.

LNC first raised the prospect of a production gap in the 737 line last September.

Furthermore, our Market Intelligence continued to indicate worries at Boeing that bridging the gap was a challenge. We understand that United Airlines’ recent order for 40 737-700s had a connection to bridging the gap and that a low sales price was, among other things, one of the incentives for Boeing to order this airplane.

We also learned late last year that because of worries over the gap, Boeing wanted to accelerate MAX deliveries as much as possible into 2017 and 2018.

Boeing also said it will deliver six fewer 767s this year than last. This, too, was a negative surprise for analysts. Officials said ramp up of the KC-46A refueling tanker was the reason. Again, skepticism emerged on Wall Street. One analyst I talked with noted that production is going up yet deliveries are going down. He wasn’t buying into Boeing’s argument.

On the earnings call, Boeing said the 777 Classic delivery slots for 2017 are 80% committed. This leaves 20 slots unfilled. Given that Buyer Furnished Equipment needs about an 18 month lead to buy the interiors for passenger airplanes, time is getting short. Freighters don’t need this lead time, but the weak cargo market remains a challenge.

If you look at Boeing’s Unfilled order website, there were 33 Unidentifieds at year-end. It’s certainly possible a few of these are scheduled for 2017 delivery, but it’s unlikely that some 20 are.

LNC continues to believe another production rate cut below the seven confirmed by Boeing last month will be needed.