The MC-21 project is United Aircraft’s and Russia’s second civil airliner project after the formation of the Russian federation. The program is used to rebuild the Russian part of the once great Soviet Union aeronautical industry around a key project.

Consequently, there has been considerable technology investment for the project. The wing is made with a new resin infusion Carbon Fiber Reinforced Plastic (CFRP) process and Russia has developed a new engine for the aircraft, the first in 30 years. The investments have been done to bring Russian aeronautical industry back to a position where it can compete with western industry in areas such a structures, aerodynamics and turbofans.

The Russian designers have been using the space of the fuselage less aggressively and in a fair comparison the MC-21-200 is very close to the A320 in cabin size. We have therefore chosen to start our evaluation with comparing the MC21-200 and A320neo.

The MC-21has a larger diameter fuselage than any available or projected single aisle airliner, 4.06m. As a comparison, the A320 has a 3.95m wide fuselage, Figure 1. This will have a positive effect on the cabin layout as we will see later. 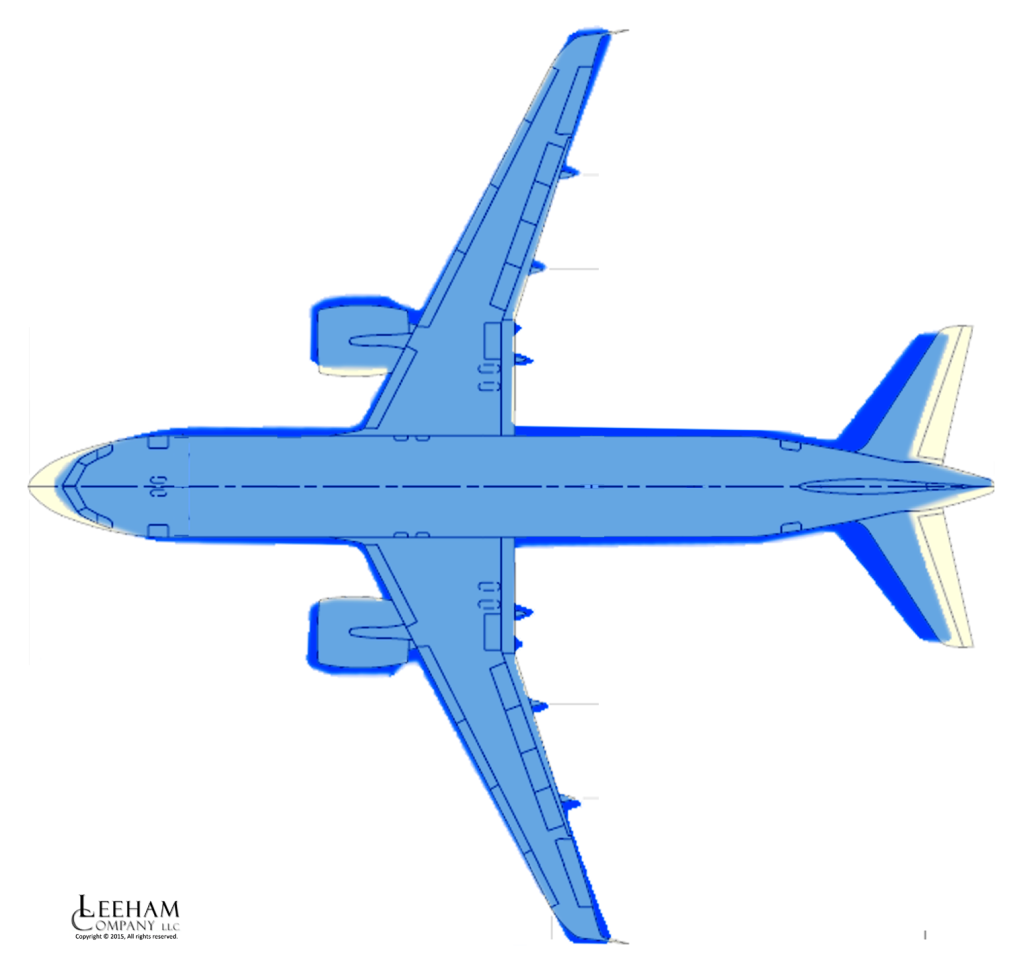 The nose of the aircraft resembles the Boeing 787 in that the designers could make it very short by using six curved windscreens instead of six straight and curved screens (A320).

The wing is similar to the A320 in span. It has slightly higher sweep and therefore cruise speed (M 0.8 instead of A320’s M 0.78) and slightly larger wing area. The lack of winglets and the larger area makes the aspect ratio lower than an A320neo, table in Figure 2.

This aspect ratio is possible as this wing is made of Carbon Fiber Reinforced Plastics (CFRP). This allows the designer more freedom because the weight stays lower despite a long span and it allows the tailoring of the wings form and aero-elasticity to a higher degree than a classical aluminum wing would allow. We covered the manufacturing method using Out-Of-Autoclave (OOA) techniques here.

The wing does not have any winglet or raked wingtips. This is no sign of not knowing how to do such devices. A common misunderstanding is that a winglet or raked tip increases a wing’s efficiency by affecting the wingtip vortices. This is a misconception.

Wing tip devices are part of the overall wing design and they improve the wing’s drag characteristics by forming a wider and (ideally) more elliptical lift distribution. If you achieve your target lift distribution with your base wing within the gate width restrictions you have, you don’t need the complexity of a special wingtip. 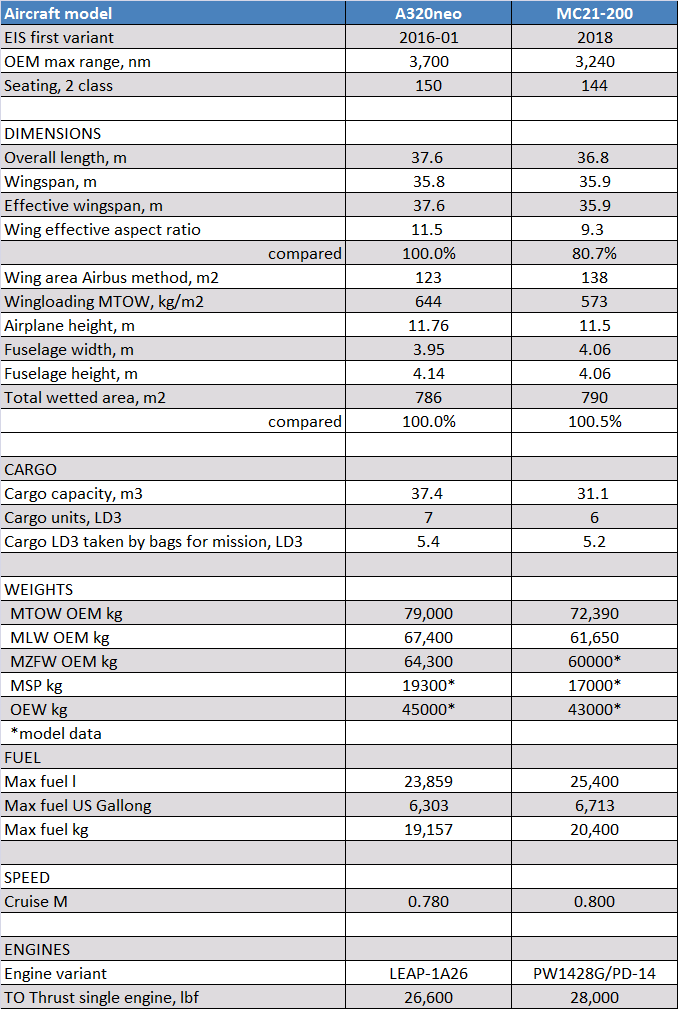 The MC-21 is equipped with a feedback based Fly-By-Wire, it can thereby keep the horizontal and vertical tails small. The airframes have as a result a similar total wetted area, meaning the MC-21 has managed to get more cabin area and larger wing area (for stretched versions like the MC21-300) within the same wetted area as the A320neo.

The shorter/wider fuselage and CFRP wing also have a positive effect on the aircraft’s Operational Empty Weight, OEW. Irkut does not state the empty weight (neither does Airbus). Our aircraft models weight analysis shows the MC-21-200 to have a two tonnes lower empty weight than an A320neo.

The wider fuselage allows a six abreast fuselage with a wider middle aisle, Figure 3. The idea is that passengers will be able to pass each other during boarding and deplaning. This will help with ground turnaround time.

Airbus seems to have used the available length more efficiently. The MC-21-200 cabin is said to take 135 passengers in a 2 class whereas Airbus shows 150 passengers on the same cabin length. With similar galley areas and seats for both aircraft the MC21-200 should be closer to the A320 150 passenger capacity.

Part of the difference in seating comes from the chosen emergency exit layout. Airbus uses a plug type over-wing exit where Irkut/Yakovlev team uses a plug door aft of the wing, which takes more place.

In the next article we will look deeper into the operational aspects of the aircraft and do our first fuel consumption estimates. We will then use the Pratt & Whitney PW1100G engine, which we know from the A320neo.

In a follow up article we will look closer at the new Russian Aviadvigatel PD- 14 turbofan which has been developed as an alternative engine for MC-21 and do fuel consumption predictions with that engine as well.