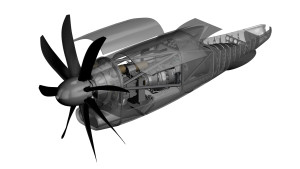 PWC’s development of a next generation turboprop engine is focused on a 4,500-6,000 shp design that could be applied to a new, clean-sheet airplane or retrofitted to the current Bombardier Q400 or ATR aircraft.

In an interview with LNC, Frederic Lefebvre, VP, Marketing for the Regional airline engines, said the new engine will be 20% more efficient and have two to three times lower emissions than today’s engines.

“We are working hand-in-hand with OEMs to understand the aircraft size requirements and aircraft speed,” said Leferbvre. The engine will likely be between 4,500-6,000shp. “That would be the sweet spot for the engine. We believe the next potential will either be an upgrade of the current airplanes or 90-100 passengers.

“There are definitely areas where only turboprops can access airports given length of runways,” he said. “There is growth in emerging countries, GDP and population. There are routes that require 90-seat airplanes. Having said that, the airlines have to strike the right balance between managing costs and frequencies.”

As for PWC and its engine development, Lefebvre said, “We’re not closed on any options for retrofit or development of a new aircraft.”

PWC continues to enhance the current engines on the Q400, ATRs and the Chinese MA-Series.

The market for a new 90-100 seat turboprop over the next 20 years seems limited. Japan Aircraft Develop Corp. (JADC) and ATR are the only publicly available studies we’ve seen to come close to segmenting this sector. JADC, which is partly owned by Mitsubishi, developer of the MRJ jet, forecasts a market of just 510 airplanes in the 80-99 seat sector. This, by itself, is hardly enough to support development of a new, clean-sheet airframe.

Lefebvre said PWC sees a market for 800-1,000 aircraft in the 90-100 seat sector. PWC believes the turboprop market will follow the trend of the mainline jets to up-gauge. 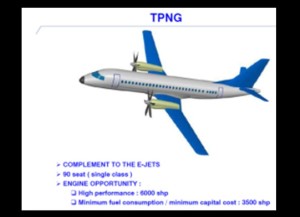 Embraer sees a requirement for 2,050 70+ seat turboprops, but EMB doesn’t break out the 90+ seat market in its public forecast.

Still, EMB has been showing information about a 90-seater, according to people who have seen the presentation. The rendering takes an EJet fuselage and marries it to a low wing, turboprop configuration using a 6,000 shp engine.

Embraer’s chief commercial officer, John Slattery, declined to comment about the prospects for a new EMB turboprop in an interview a few months ago. When LNC showed corporate communications officials the rendering of an “ETP” (Embraer Turbo Prop) during the rollout activities of the E190-E2 last month, they declined comment.

In an interview in October 2014, an EMB officials said Embraer needs a second family of airplanes, but seemed cool to the idea of reentering the turboprop market because of limited demand—some 2,000 airplanes over 20 years—and the cost of developing the airplane, which he said was the same as a jet.

China continues to develop its MA-Series of turboprops, but it’s had plenty of challenges. A Wall Street Journal profile of the MA-600 is hardly reassuring.

India and Indonesia announced development programs. Even if these proceed, and if the airplanes remain largely for the home markets, they’ll split a highly limited market demand.