July 12, 2016, © Leeham Co., Farnborough Air Show: Airbus will lower the production rate of the giant A380 from 18/yr to 12/yr, effective in 2018, the company confirmed after the French newspaper La Tribune first reported the news Tuesday evening Paris Time.

In January, LNC in its annual production rate forecast projected the A380 rate coming down to 12/yr by 2020. More recently Leeham Co. LLC told clients Airbus needed to figure out how to achieve a break-even at one a month (12/yr) and bring rates down sooner. 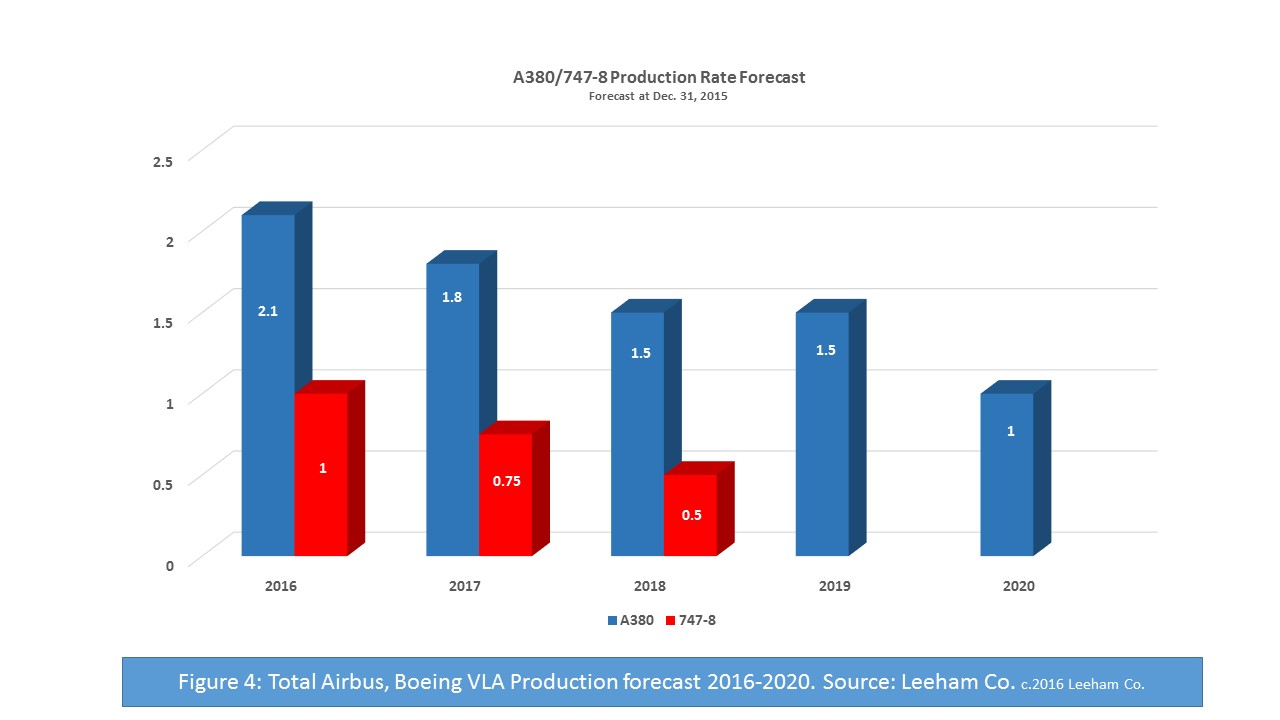 All this was based on the current backlog and customer quality.

In a press release issued after La Tribune’s report, Airbus aid it’s achieved break even at the rate of 20/yr in 2017. The company “targets additional cost reduction initiatives to lower the breakeven further,” it said.

Airbus is sticking to its plan to maintain production of the A380 until future traffic demand catches up to the size of the airplane. In the Global Market Forecast issued Monday by Airbus at the Air Show, the company is sticking with its long-held belief that the Very Large Aircraft market will support 1,500 Airbus and Boeing passenger and freight aircraft during the next 20 years. Boeing’s forecast, also released Monday, is a fraction of the Airbus forecast.

In a statement, Airbus Commercial CEO Fabrice Bregier said, “We are establishing a new target for our industrial planning, meeting commercial demand but keeping our options open to benefit from future A380 markets….”

Will there be a charge?

Airbus did not say if it will take a charge to the program. Officials are meeting Wednesday morning in London with investors.

The move was long seen coming. While some critics, such as consultant Richard Aboulafia of the USA’s Teal Group, believe the A380 is “dead,” Airbus believes the future airport constraints and congestion will prove demand for the aircraft.

Boeing’s competing 747-8I is doing poorly as well. Boeing insists the 747 has a future, but now talks of it as a freighter, not a passenger model.

The move recognizes reality of the current market, driven by necessity. It also gives Airbus time to decide whether to re-engine the airplane at a later date, a persistent request from Tim Clark, the president and COO of Emirates Airlines.

Airbus has been unwilling to commit to an A380neo. More recently, Clark expressed concern that Airbus will simply keep producing the airplane.

This rate reduction answers the question, at least for now.

The A380 may face additional challenges, however, should Boeing decide to proceed with a third member of the 777X family. The plane, already dubbed the 777-10 (though not by Boeing), would seat about 50 more passengers than the 777-9. Boeing is doing studies on the prospective -10 now.

Airbus Targets Delivery of Twelve A380 Per Year From 2018

“With this prudent, proactive step we are establishing a new target for our industrial planning, meeting current commercial demand but keeping all our options open to benefit from future A380 markets, which we consider in the environment of ongoing aviation growth and constrained airport capacity as a given,” says Fabrice Brégier, Airbus President & CEO. “We are maintaining, innovating and investing in the A380, keeping the aircraft the favourite of passengers, the airlines and airports – today and in the future. The A380 is here to stay!”

Airbus reached breakeven at 27 aircraft deliveries in 2015. The company will continue to improve the efficiency of its industrial system to achieve breakeven at 20 aircraft in 2017 and targets additional cost reduction initiatives to lower breakeven further.

With passenger traffic doubling every 15 years, the A380 is the one and only solution for sustainable growth at congested airports. Today, 18 global leading airlines have ordered a total of 319 A380s so far, building their brand with this flagship aircraft. The 193 megaliners that have been delivered to 13 operators serve over 100 routes on an ever expanding global network. Today every three minutes an A380 takes off or lands. In 2016, 14 aircraft have been delivered so far and underlines a stable production performance with the backlog standing at 126.

The 193 A380s in operation today are serving 38 of the 55 global aviation megacities (47 of which are either growth or schedule-constrained). The number of megacities will rise to 93 by 2035, serving 2.5 million daily passengers and 95%+ of long-haul traffic.

Passengers love the A380 and the aircraft is clearly the passengers’ aircraft of choice. Independent studies show that 60 percent of passengers make an extra effort to fly on the comfort-leading double-deck mega-liner. Airbus is supporting this distinctive travel behaviour through a new, unique IflyA380.com booking assistant launched at Farnborough Airshow this year. Operated in full partnership with the A380 airlines around the world the website enables passengers to prioritize and select the A380 when making their travel arrangements.

Airbus expects that based on the flexibility within the wider Airbus programme ramp up environment and also opportunities within other Airbus Group Divisions, the impacts on employment will be mitigated.