Sept. 12, 2016, © Leeham Co.: Sully, the movie about the miracle of the successful water landing of US Airways 1549 on the Hudson River in New York City, sullies the National Transportation Safety Board.

Apparently not content with the gripping drama of the flight’s emergency itself and the dramatic rescue of all 155 souls on board, the movie gins up an NTSB out to hang Capt. Chesley Sullenberger (Sully) and co-pilot Jeffrey Skiles. 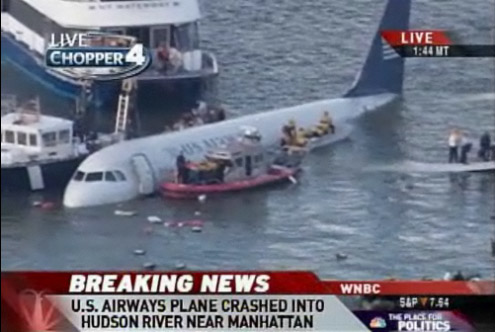 “Sully” producer Clint Eastwood had plenty of material to draw from for his movie about US Airways 1549 rather than ginning up a weak plot line about the National Transportation Safety Board. Photo via Google images.

continue to Teterboro Airport in New Jersey for an emergency landing.

The movie has Tom Hanks, who portrays Sully, dismiss the questions posed by NTSB investigators as routine (which they are) in an apparent attempt to downplay the obvious hostility written into the script. It’s a throwaway line that doesn’t work.

It’s a disservice to the NTSB. The investigators involved protested the portrayal, and some of my peers have done likewise.

Once director/producer Clint Eastwood get beyond this unfortunate plot line and actually focuses on the flight and rescue, the movie is gripping. He replays the flight several times to bring in new information and recollections, perhaps one too many times, but it works.

The rescue of all passengers took 24 minutes. I don’t think Eastwood gave enough time or credit to the herculean efforts (other than closing credit text) of all those involved.

Contrast this to the TV movie, Crash Landing: The Rescue of Flight 232. This movie eschewed the typical disaster movie focus (often contrived) on the passengers and instead centered on the preparation by first responders to disaster drills and the execution of the plans when United Airlines 232 crash landed at Sioux City (IA) after a catastrophic engine explosion severed control systems.

Eastwood had rich, rich material to work with about the backgrounds and professionalism of Sully, Skiles, the flight attendants. Only fleeting glimpses of Sully’s background is included.

He also had rich material to work with on the 24-minute rescue of the ferry system boats, crews and captains; and of the NYPD helicopter crew. This didn’t get enough attention.

Finally, an honest portrayal of accident investigation, while probably not dramatic enough for movie-goers, would have demonstrated the meticulous nature of probes that typically take more than one year.

Eastwood could have really upped the tension if he sequenced the flight, the impact with the birds, the emergency landing and the rescue in real time, all in under 28 minutes, with a little clock in the corner of the screen. Repeated references to “208 seconds” for the flight and 24 minutes for the rescue are abstract figures. Imagine audience reaction living all this as it happened.

Put aside the hyped NTSB story line and you have a three-star movie. With it, it’s a two-star.

I wrote about last week’s Bloomberg report that Boeing is looking at a stretched 737-9, the 737-10, in my column at Forbes.