The GasTurb cross section of a three-shaft turbofan is shown in Figure 1. We will examine the sections between station numbers (22) and (3) and (4) and (5) in the general discussion of compressors and turbines. We will then look at some data for common compressors.

Compressor and turbines use the characteristics of a gas that we showed in Figure 2 last week. I repeat it here with an adaptation for this Corner, the beginning of the combustor is changed for a compressor section in the right-hand piece. The compressor rotor consumes axle hp to increase the speed of the air for the following stator vanes to decrease the speed and gain pressure (and temperature). 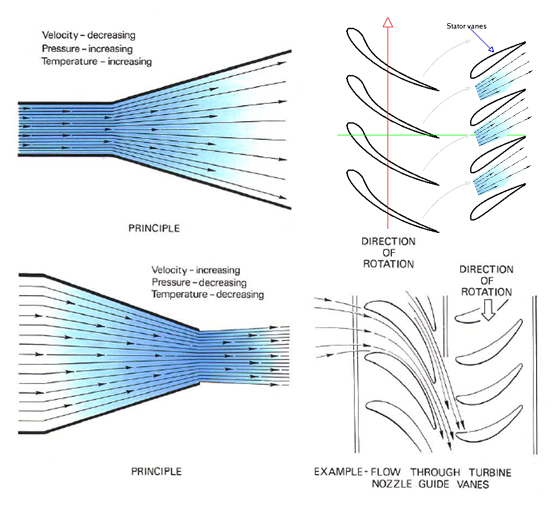 Most speed increase and decrease is in the tangential direction. The axial velocity over a combined rotor and stator pair is roughly constant, Figure 3. 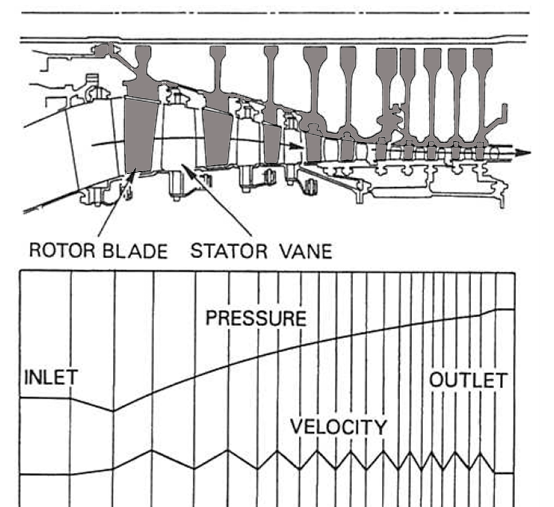 Figure 3. Section through a compressor with pressure and velocity graphs. Source: Rolls-Royce: The Jet Engine.

The compressor has the more challenging task. The shaft hp is used to sweep the incoming air with a rotor blade which acts like an airplane wing and turns the air in the direction of the rotation. The airspeed and angle to the blade is the vector sum of the incoming air speed and the rotor blade’s local radial speed.

Like for an airplane wing without slats, the angle of attack can only be around 10° max before leading edge separation occurs. Air passing over the blade is going against an increasing pressure gradient, i.e., with a typical pressure gain of 1.3 times over a stage, the pressure in the stator behind the rotor is 30% higher than before the rotor/stator pair. The flow against an increasing pressure makes the trailing edge experience flow separation if the speed of the air is not kept up. Flow separation hurts the diffusion and finally makes the blade stall over its complete surface.

The fact that the blade is turning towards the incoming air from the stator makes the angle of attack increase when the airflow reduces with reduced rotor RPM. With a limited angle of attack capability of the blade, special means are required to let the rotor reduce speed from the design RPM.

These conditions make the compressor fickle. When things don’t fit, the compressor will lose function and can stall violently. The high pressure combustor gas can then go out the front of the engine, a so called “Burp” or surge stall. Alternatively, the compressor can stall for a longer time with little surge action, a so-called rotating stall. Then one needs to shut down the engine to recover normal function.

We will cover what is done to handle the fickle compressor to make it usable over the wide range of conditions which are necessary for an engine in the next Corner. Today we will explain why the turbine, which is using the same principle, is such a robust companion (aerodynamically at least).

The turbine is using high energy combustion gas to drive its rotor, Figure 2. Here the gas is going from a higher pressure to lower pressure after the stator/rotor pair. The incoming gas to the turbine blades is turned by the stator to tangential direction and the speed is increased through convergence. The gas is then pushing the blades away from the stream, which is lowering the angle of attack at lower rotor RPMs.

The gas therefore finds it easy to curve around the blade (also at lower RPM) and is meeting a lower pressure on the trailing edge of the blade than at the leading edge. The blade boundary layer is sucked off the blade and the gas speed is kept up. The actual curving is what creates shaft hp (momentum change). A total direction change (deflection) of 90° or more can be achieved with turbine blades. In a compressor rotor the direction change is less than half of that. At the end of the stage the direction of the flow is back to essentially axial, to be ready to enter the next stage.

A turbine stage (stator/rotor) is consequently robust and can easily achieve shaft hp from a 4:1 pressure loss with good conversion efficiency. It can also give a higher shaft hp gain (by virtue of a higher pressure loss) with less efficiency or lower gain with less pressure loss. Whatever you want, it doesn’t complain, just works more or less efficiently. This is why a 20 to one, 10-stage compressor can be driven by a two-stage turbine.

Our Trent XWB has a similar stage gain in its high pressure compressor. The combined stage gain over the Intermediate Compressor and High Compressor is around 40 at ToC, which gives an average stage gain of 1.30 with eight plus six stages in total.

Equally important to the per stage gain is that this is achieved with a high conversion efficiency, shaft hp to pressure gain. The conversion efficiency for compressors used to be between 80-90%. New designs achieve over 90% at their optimum design point (which is designed to be cruise). Values of 92%-93% have been publicized in specialist papers.

Turbines conversion efficiency is typically the same or slightly higher than for compressors, it depends on how many shaft hp they produce (with the corresponding pressure drop). The more you ask them to do, the less efficient they get, more on that later in the series.

This also means that the pressure gain in the compressor is accompanied by a temperature increase. At the end of the compressor this forces the material choice to expensive nickel alloys. The temperature drop over the turbine stages allows later stages to be un-cooled.

In the next Corner, we will dive deeper into what is required to have compressors that can work over a wide range of engine RPM’s, air densities and the resulting throughput of air. We will also look at how compressors are constructed and why radial compressor are used for smaller engines.