Nov. 28, 2016: Here are the full statements from Airbus and Boeing about the WTO ruling today finding Boeing received prohibited subsidies from Washington State for the 777X development:

WTO DELIVERS KNOCKOUT BLOW TO BOEING’S RECORD-BREAKING SUBSIDIES WITH HISTORIC RULING
 Extends the WTO’s earlier condemnation of massive illegal subsidies to Boeing to 26 billion USD in the form of wholly non-refundable corporate welfare. This is the single largest state-level instance of corporate welfare in US history.
 The subsidy package condemned by today’s report is large enough to fund the entire development of the 777X and has already cost Airbus $50 billion in sales.
 This is only the second time in the WTO’s 20+ year history that a country has been found to have provided prohibited subsidies contingent on domestic content. 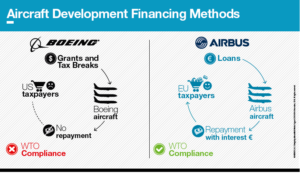 Today’s report from the World Trade Organization (WTO) Panel (DS487) confirms that the United States has ignored international trade rules by permitting illegal subsidies to Boeing, this time targeted at the 777X aircraft. The Panel found Washington State’s multi-billion dollar subsidy regime for Boeing to include “prohibited” subsidies, which in the Panel’s words belong to “a special category… which Members have deemed to create such trade distortions that they are proscribed,” because they are “specifically designed to affect trade.”

“The United States and Boeing picked this fight at the WTO, and today’s ruling is yet another blow for that strategy,” said Tom Enders, Chief Executive Officer, Airbus Group. “Those prohibited subsidies must be withdrawn immediately following today’s historic ruling, meaning that Boeing must give up these massive tax subsidies.”

This ruling adds to the previous findings by the WTO in 2012 that federal, state, and local governments in the United States are providing huge and WTO-inconsistent subsidies to Boeing (DS353), now mounting up to a total of 26 billion USD of pure grants which Boeing has no plans to repay. “The earlier WTO rulings had already confirmed that B787 was the most highly subsidized aircraft in the history of aviation,” said Fabrice Brégier, Airbus President & CEO. “Today’s report leaves no doubt that Boeing has gone even further. The 777X will not cost Boeing a single dollar to develop thanks to Washington State’s taxpayers. We estimate the damage to Airbus and the European aerospace industry in the region to be $50 billion so far, and that’s only for the 777X. The United States Trade Representative (USTR) should take immediate action. This cannot go on any longer. It is time for the U.S. Trade Representative to insist that Boeing cease its anti-competitive behavior.”

Among those subsidies found to be WTO-inconsistent in 2012 – due to the significant competitive harm caused to Airbus – was the very same Washington State tax incentive regime found today to include a “prohibited” subsidy. “Instead of complying with that 2012 ruling, the United States has doubled-down on illegal conduct,” explained John Harrison, General Counsel, Airbus Group. “By extending the tax incentives through the year 2040, increasing their value by nearly $9 billion, making them available to a new Boeing aircraft, and adding an illegal contingency, the United States and Washington State are further defying WTO compliance.”

Industry specialists suggest that the nearly $9 billion in subsidies provided by Washington State is largely sufficient to cover the entire cost of design and production of the 777X, essentially giving Boeing a “free ride” by offsetting entirely the costs of developing and bringing the aircraft to market.

Considering today’s ruling, together with the 2012 ruling in the original dispute, Boeing has caused at least $95 billion in commercial harm to Airbus, opening the door to trade sanctions against the US in an equivalent amount. As Harrison explains: “The WTO has for the first time in these disputes identified prohibited subsidies to Boeing for the 777X, condemning as the worst form of trade violation a full aircraft development illegally financed by taxpayer money. And that is supposed to be good for American business and workers? Unlike the loans to Airbus – the interest rates of which were considered in the WTO dispute against the European Union – Boeing plans no repayment of any kind.”

Harrison added that: “The United States has no other option than to direct that Washington State repeal the legislation or amend it in a way that makes it WTO-compliant. That would obviously take away any incentive to keep producing the 777X in Washington State and it will certainly not benefit Boeing’s balance sheet.” The Panel has declared that the US must end the prohibited subsidy regime in Washington State within 90 days. This is on top of the ongoing US failure to comply with the original WTO ruling against Boeing subsidies – for which the public panel report is expected in the next several months.

Airbus once again congratulates the European Commission and the Governments of France, Germany, the UK and Spain for their success at the WTO, and is grateful for the years of effort they have invested in setting the record straight.

“We hope this outcome will lead those at Boeing who advocate continuing this trade dispute to reconsider,” Tom Enders concluded.

The World Trade Organization (WTO) today rejected virtually all of the European Union’s challenges to the Washington state tax incentives. 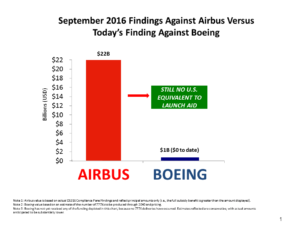 In today’s case, the EU challenged seven different state tax incentives.  The WTO rejected entirely the EU’s challenge to six of the seven incentives and rejected most of the challenge to the seventh.  The WTO held only and narrowly that a reduction in Washington state’s Business and Occupancy (B&O) tax rate for future 777X revenues is inconsistent with the WTO agreements.  The WTO threw out all of the EU’s other challenges to various incentive programs and left untouched even the B&O tax rate as it applies to revenue from the other Boeing models produced in Washington state–the 737, 747, 767, 777 (current model) and 787.

In total, the EU claimed that Boeing had received $8.7 billion in subsidies.  This claim was rejected by the WTO, which found future incentives totaling no more than $50 million a year to be impermissible.  The WTO found that to date Boeing has received no benefit from the 777X rate incentive, and will not until 2020, because the first airplane will not be delivered until then.

“The WTO has repeatedly found that Airbus is entirely a creature of government, and they must now bring themselves into compliance with the international laws or risk massive sanctions,” said Luttig.